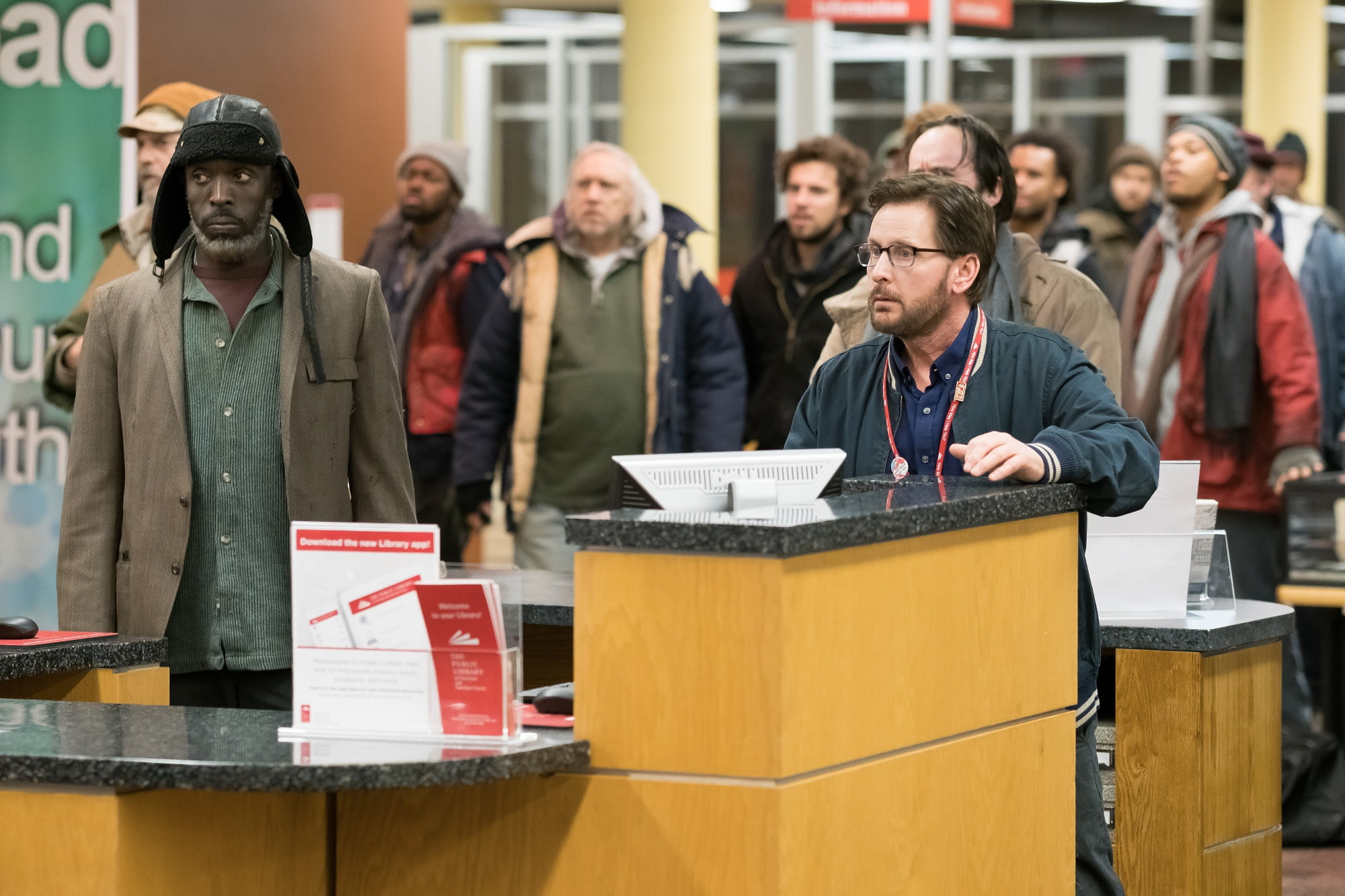 The Public, the latest effort from writer, director, and star Emilio Estevez, has some extremely broad storytelling sensibilities, but it also boasts a big, beating heart that can’t be denied, discounted, or maligned. A work of honest, earnest, and wholly heartfelt advocacy aimed squarely at the everyday people who tend to turn a blind eye towards the less fortunate, The Public might cause some supposedly “woke” viewers to scoff, groan, and grumble, but Estevez hasn’t made this movie for them. It’s the kind of political soapboxing made for the largest, most easily accessible audiences the film can find, making Estevez’s work a perfect metaphor for its titular service provider.

The Public refers not only to the citizens of a city or town, but also to the local public library; “the last true bastion of democracy,” as one character puts it in Estevez’s almost gleefully on the nose screenplay. The writer-director stars as Stuart Goodson, the shy, dorky, well mannered, and empathetic head librarian for the Cincinnati Public Library. The library still serves its primary function of providing guidance, books, and resource materials to anyone seeking knowledge, but as many city dwellers probably already know, it’s also a place where the homeless, mentally ill, recent immigrants, and the otherwise marginalized go to conduct a lot of their daily business.

With the city in the grip of a brutal polar vortex, it’s also a place of respite for many people on the streets, at least until the library’s closing time. As city shelters fill beyond capacity and start turning people away without giving them other housing options for the frigid night ahead, one of the library’s regulars (Michael K. Williams) concocts a plan to stage a peaceful sit-in at the library overnight. Stuart, who admits to previously struggling with mental health and addiction issues, embraces the idea and allows those in need shelter for the night. The plan doesn’t go over well with Stuart’s boss (Jeffrey Wright) and even more terribly with a tough talking local prosecutor (Christian Slater) who has an axe to grind with Stuart and an ongoing mayoral campaign based upon a “tough on crime” platform. Caught in the middle of the two extremes is Detective Bill Ramstead (Alec Baldwin), a police hostage negotiator who’s desperate for a leave of absence from the force so he can track down his own addict son on the streets.

As a filmmaker, Estevez has previously shown that he has a way with these particular kind of ensemble, character based stories, and The Public, while undeniably overstuffed and assuredly melodramatic and manipulative, certainly slots nicely into his wheelhouse. The story – one where everyone’s connections to one another and clearly signposted clues are underlined and emboldened in large print at every turn – and visuals are all rather rudimentary, but what matters most about The Public is the message, and it’s clearly one that Estevez has thought about at great length. Much like the character he portrays, it’s clear that Estevez the filmmaker is a kind hearted, left leaning nerd, and I mean that as an endearing compliment.

Opening The Public with an archival filmstrip aimed at those thinking of becoming librarians that says anyone in their profession needs to like people and also be liked by people, Estevez segways nicely into his look at how the keepers of knowledge and order have also become modern day, underpaid, woefully unprepared social workers. The library wouldn’t exist if people stopped using it altogether, but it clearly provides necessary services to those who don’t have constant access to internet connections, various forms of entertainment, or even running water. Librarians, much like doctors, religious figures, teachers, and lawyers, have a duty to keep their patrons safe and their problems confidential, regardless of social status. And as Estevez shows quite nicely in the film’s early going, it’s hard, frequently thankless work. 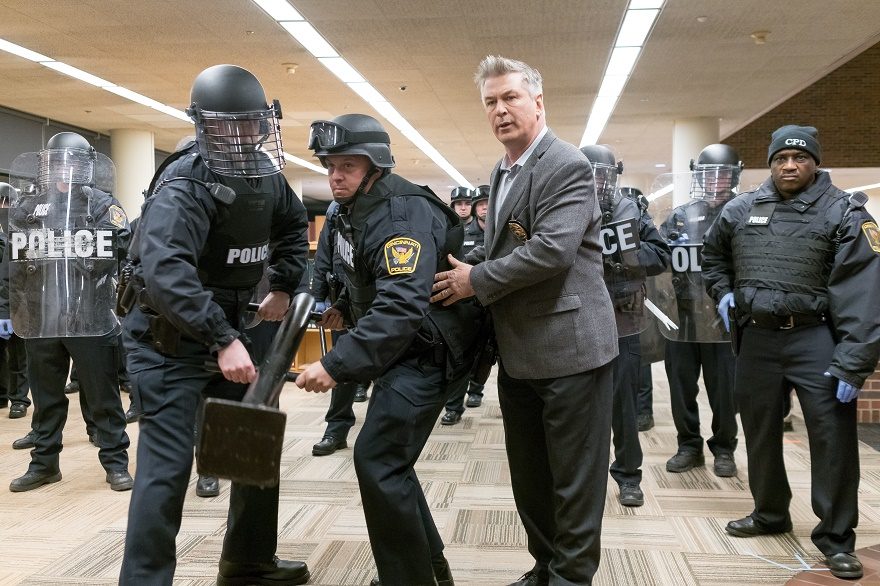 Estevez, who delivers his best on screen performance here, shows the relationship and shorthand he has with co-workers (including some nice turns from Jena Malone as a rookie librarian and Jacob Vargas as one of the branch’s security guards) not through grandstanding speeches, but rather through snappy exchanges of dialogue that feel reasoned and lived-in. Stuart genuinely wants the library to be a safe space for all, and frequently goes out of his way (sometimes admittedly overstepping boundaries) to make sure that everyone’s needs are being met. It’s causing him to unravel and burn out somewhat, but the character genuinely believes that he’s always doing the right thing.

While Stuart is a good character and Estevez excels at playing him, the other members of the cast have to wrestle with roles that vary in consistency and quality. Baldwin does some great work as the conflicted cop, and Taylor Schilling has a nice role as Stuart’s crush, who’s outside the building and trying to keep Slater’s evil politico from escalating and spinning the situation into looking like something far more sinister than it actually is. Slater does a fine job as the slick, right wing son-of-a-bitch who hates “the crazies” who’re taking over the city. The role is a bit over the top, but it’s fun to watch Slater clashing with both Estevez and Baldwin’s more level headed and morally centred characters. Williams and Wright have curiously little to do in roles that seem like they were once bigger and more important before they got whittled down throughout production, but they make the most of the screen time they’re allotted.

Then there’s the matter of Gabrielle Union, who’s wonderful, but saddled with the film’s most unbelievable and annoying character. Union plays an unscrupulous television reporter covering the stand-off, who immediately reports that the events unfolding in the library are either a hostage situation or an active shooter, and she somehow grows into a worse person from there. Even more so than Slater’s villain, Union’s should come with a handlebar moustache to twirl whenever she’s on screen, and she gets the tone of the character perfectly, so any of her shortcomings are the fault of Estevez, not the actress. With this character, The Public asks viewers to suspend their disbelief and buy into the notion that the city of Cincinnati only has one television station, that Union’s reporter has no one above her that she has to report to or clear things with, and that she’s so inherently evil that she’d willingly ignore a much better story in hopes that the standoff between the police and the homeless would end in bloodshed. This character is patently unfathomable in a story already packed with cliches and conveniences. It’s completely unnecessary.

But for all its faults and rants, The Public keeps its heart on its sleeve at all times and never wavers. It’s consistently entertaining and amusing even when the actual plot strains credibility. It also delivers a lot of points about modern day society that people frequently take for granted. The Public is a work of great empathy and basic human kindness. It’s not made for people who know the role libraries serve today (although those folks will probably enjoy a great deal of Estevez’s film), but rather for those who shy away from going to one precisely because of the issues the story brings to light. It’s a penny for one’s thoughts and comfort food in the same overstuffed package. It works better than it probably should.

The Public opens at Varsity Cinemas in Toronto on Friday, April 26, 2019.

Check out the trailer for The Public: