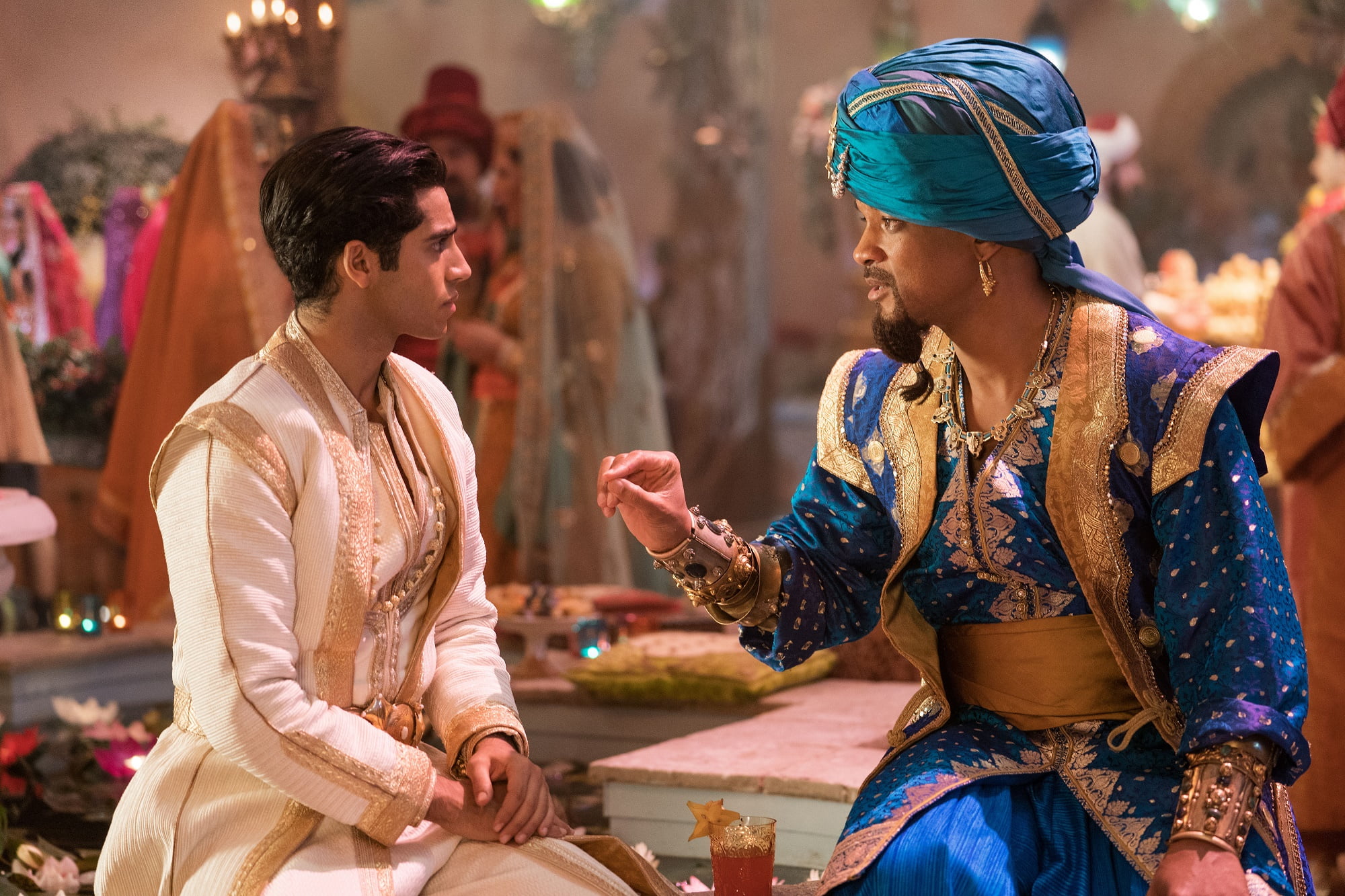 Disney and director Guy Ritchie’s Aladdin is a blandly competent, flavourless film that has no reason to exist outside of making a quick buck from families and nostalgic millennials who’ll shell money out for anything based on an intellectual property they have fond memories of. Unlike many other attempts to reboot classic Disney animated efforts with live-action counterparts, Aladdin does nothing whatsoever to improve upon, change, or re-contextualize its predecessor for modern audiences or fans looking for something new from the material. It’s almost the exact film delivered with half the energy, five times the budget, far less charisma, and a sad resignation to hitting every major bullet point before the credits roll. It’s staggering to think that so many talented people wasted so much time, money, and creative effort to turn out something this lacklustre and gutless. Say what one might about other live-action Disney remakes like The Jungle Book, Dumbo, or Cinderella, but those films at least showcased some degree of daringness or ingenuity. Aladdin, on the other hand, is a cardboard cutout masquerading as a big budget blockbuster. I understand the mantra of “if it ain’t broke, don’t fix it,” but at some point in pre-production on Aladdin, someone should’ve said “if we can’t do it better or we shouldn’t change it, we should just leave it alone.” It’s one of the least effective (but certainly not worst) remakes I’ve ever seen.

In case you don’t already know the plot of the 1992 Disney animated retelling of a legendary, often imitated Arabic folktale, it concerns Aladdin (played here by Canadian rising star Mena Massoud), a down-on-his-luck street kid and orphan who steals to survive with the help of his trusty monkey, Abu. He has a crush on the gorgeous and wealthy Princess Jasmine (Naomi Scott), who’s desperate to squirm out from under the overly protective thumb of her widowed sultan father (Navid Negahban). Aladdin can’t date or marry the princess because he isn’t a prince, but that doesn’t stop him from trying to see her in secret. Aladdin’s crush is discovered and exploited by the sultan’s closest and most power hungry advisor, Jafar (Marwan Kenzari), who forces the young man into procuring a legendarily unretrievable treasure from the Cave of Wonders. Aladdin is sent to swipe a seemingly innocuous looking oil lamp that houses a mythical, all powerful, wish granting genie. When things go sideways and Jafar leaves Aladdin seemingly for dead, the young man rubs on the lamp and takes control of the big blue entity with an even bigger personality living inside of it.

The script for the new Aladdin, credited to John August (Charlie’s Angels, Frankenweenie) and Ritchie but should more appropriately be attributed to a photocopier, is a work that’s deathly afraid of deviating from the original Disney formula; one that was constructed by literally dozens of writers who workshopped everything to death in the first place so no one else had to take on any sort of risk. Other than a two new songs (well, one and a half, actually), a bunch of superfluous moments to extend the running time past the two hour mark for no good, relevant, or explainable reason, a romantic subplot for the Genie (played here by Will Smith, playing one of the most iconic roles originated by the late Robin Williams) and making Jafar’s parrot sidekick Iago (voiced by Alan Tudyk) into more of an animal and less like some much needed comedic relief, everything unfolds in Aladdin in the exact same order and manner that one expects. If you’ve seen the original Aladdin, Ritchie’s take will likely bore you within seconds. If you haven’t seen the animated version, you’ll probably wonder why Aladdin seems so boring, lethargic, and uninspired.

The many problems with Aladdin can be traced primarily back to Ritchie (Snatch, RocknRolla, Sherlock Holmes) being all sorts of wrong for this material. Best known for making movies about swaggering, alpha male tough blokes, the British filmmaker feels adrift in this sea of musical numbers (which are mostly incompetently assembled and poorly staged), wisecracks for kiddies, and sometimes distressingly dodgy and cheap looking CGI spectacle. If there isn’t an action sequence happening (the best of which comes early during Aladdin’s “One Jump Ahead” number as the “street rat” frantically evades local authorities), Ritchie’s direction seems confused, scattered, and completely lacking in investment, conviction, personality, or an original point of view. It’s a film that takes the bones – and even many of the exact same lines – from the previous Disney version of Aladdin and stages them with less emphasis and zeal than a high school stage production of the same material. I’ve seen cosplayers at conventions put infinitely more thought and heart into their depictions of these characters than almost anyone in front or or behind the camera in this movie. 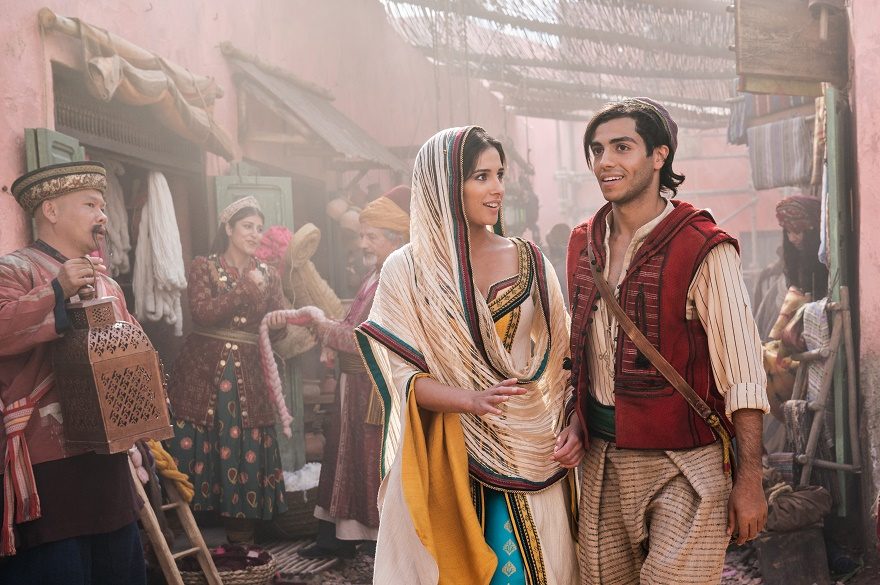 Ritchie’s basic, uninspired adherence to formula and making sure that the production design details are right shackles two of his leading performers, dooming them to subpar work. While Scott (who gets the film’s new musical material, including a song that unforgivably sounds out of place among Alan Menken’s original materials and actually interrupts the film’s otherwise sufficiently tense climax) and Kenzari are doing what they can, Massoud and Smith flop and flounder, unable to create characters of their own because no one has any interest in doing anything more here than the bare minimum.

Massoud is handsome, squeaky clean, physically capable, and has a million watt smile, but he has no discernable charisma whatsoever. It’s hard to invest into Aladdin as a character here because Massoud always feels like an actor going through the motions and reading lines off a page; deathly afraid that his notoriously tempestuous director will read him the riot act if he even slightly deviates from the role’s rigid guidelines. It leaves Aladdin without a well defined heart and soul, and this massive shortcoming in casting is only compounded by the casting of Smith as the genie, a role that only has the actor’s bottomless charisma going for it.

Smith is asked to frequently regurgitate the same lines that Williams’ genie spoke in the original, which is poor form, and not just because the late comedian’s performance was a pitch perfect and anarchic injection of life into one of Disney’s most memorable films. Occasionally, Smith is allowed to go into business for himself and riff a little bit, but Ritchie’s skittish, risk averse approach and material more often than not settles for the same old, same old. Smith can’t do much more than fall back onto his natural charms as a performer, leading to a performance in an iconic role that’s all sizzle and no steak. He’s basically asked to play the role of a clown at a child’s birthday party, and he does an adequate job of living up to those low standards.

Ritchie might be a successful, yet wildly overrated filmmaker on the whole (and one who hasn’t made a truly watchable movie in years), but watching him go through the paces of making something like Aladdin is nothing short of depressing. If Ritchie was given free reign and allowed to make a dark, tough-talking, edgy version of this same story, Aladdin might’ve been a trainwreck, but at least it would’ve almost justified its existence. This remake isn’t designed to entertain. It’s designed to make money, fill theatres, and kill time. It’s inoffensive on the whole, but also wasteful and unnecessary. It won’t tarnish the sterling reputation of the 1992 animated version. If anything, it will make people flock to Disney’s original even more. As long as the original Aladdin exists, Ritchie’s remake is the definition of “missable” event cinema.

Aladdin opens in theatres everywhere on Friday, May 24, 2019.

Check out the trailer for Aladdin: