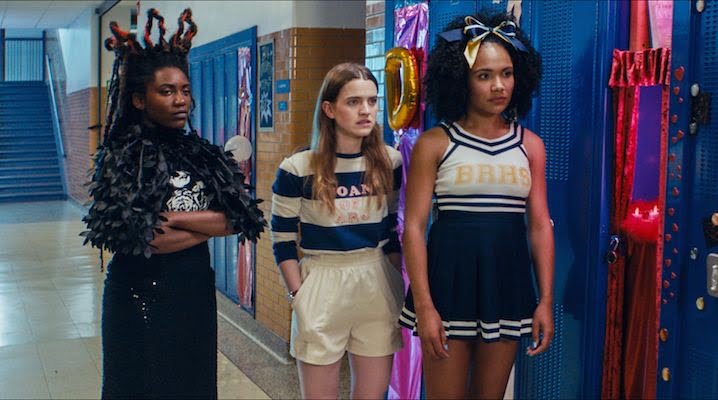 Knives and Skin, the latest feature from American filmmaker Jennifer Reeder, suggests what might happen if television’s Riverdale gave up all pretenses of being a straightforward, ridiculously over-plotted teen soap opera and fully gave in to its own underlying weirdness and became something much closer to Twin Peaks. It’s one of the strangest, funniest, and creepiest films of the year, and while it certainly won’t appeal to everyone’s sensibilities, it’s still wildly entertaining if you can get on its unique wavelength and compulsively watchable even if you can’t.

It’s extremely hard to explain a film like Knives and Skin, which stitches together a loose, but impactful story from a series of intersecting anecdotes that use surrealist humour and a number of deadpan one liners that make no sense outside the context of the movie. There’s a sadsack father who dresses up like a clown to hide the fact that he’s unemployed, a scene where a search party is given bizarre, convoluted instructions, a girl who sells her mother’s unwashed panties to creepy older men, dirge-like, acapella covers of classic 80s New Wave hits that make the movie function best as a jukebox musical, and people who talk to cat dolls or glow in the dark t-shirts. Reeder leans heavily into the more humorous and strange aspects of her story, but instead of distracting from a film that could certainly afford to trim a couple of its many subplots (since most of the stuff involving the local teens is vastly more engaging than anything with the adults), Knives and Skin uses its surrealist tendencies to say something very pointed and poignant about womanhood and toxic masculinity.

It also helps that Knives and Skin has a perfectly capable cast from top to bottom, and the film’s pastel and neon heavy colour palette stuns at every turn. Knives and Skin is some of the most fun adventurous viewers can have being hypnotized by a movie.

Knives and Skin screens at the 2019 Inside Out LGBT Film Festival on Wednesday, May 29th at 9:30pm.

Inside Out 2019Jennifer ReederKnives and Skin