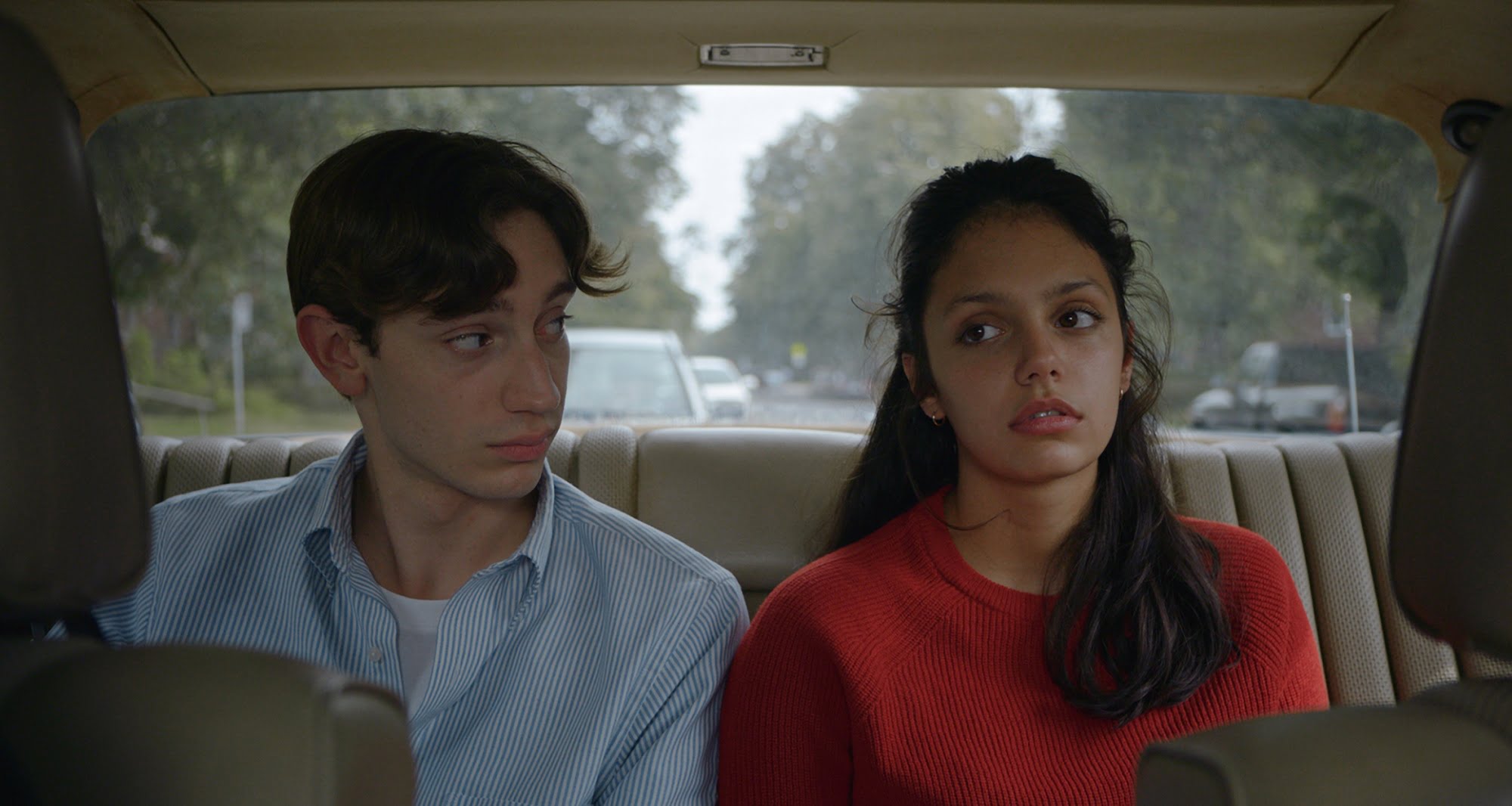 Ambitious and indulgent, but filled with plenty of emotionally devastating musings about young love and the casual cruelty of human beings, Quebecois filmmaker Philippe Lesage’s Genesis is both a mess and a masterstroke. A film that’s better in individual moments than taken as a whole – which might be part of the point – Genesis is an uneven, overthought, and yet remarkably assured overlapping of tales of unrequited, unattainable love that finds more potency in its smaller touches than its grander gestures and stylistic gambles.

Guillaume (rising, underrated young star Théodore Pellerin) and Charlotte (Noée Abita) are step-siblings going through equally troublesome patches in their romantic lives. Younger, sixteen year old Guillaume, who attends an all male boarding school, exudes confidence and bravado in front of his classmates, but he can’t tell his best friend, Nicolas (Jules Roy Sicotte) that he has a crush on him. He doesn’t even know if Nicolas feels the same way, and if he were to openly ask, being outed as a gay man could irreparably harm his standing among his classmates. Meanwhile, older, college aged Charlotte has grown suspicious of her kind, needy, and nerdy beau, Maxime (Pier-Luc Funk), after he brings up the idea that they might not stay together forever, and the notion of starting an open relationship where they could be free to see and sleep with other people. The conversation sends Charlotte into an emotional tailspin (which wasn’t Maxime’s intent), and she quickly flies into the arms of the Theo (Maxime Dumontier), a meatheaded alpha male who represents the exact opposite of the masculinity spectrum.

Lesage’s set-up and structure for Genesis is an interesting one, with the writer-director launching into both stories before briefly examining the connection between Guillaume and Charlotte. Lesage bounces back and forth between the two threads almost at random, like he’s switching between channels and staying there for several minutes before switching back. The approach doesn’t kill any sort of momentum Genesis might be building, but it instead enhances the emotional investment in each story equally. Not every transition in Genesis needs to end with some sort of grand reveal, and it turns out to be a solid artistic distinction that highlights the heightened emotions and somewhat cliched banality of each of the core love stories.

Genesis is also unique in its ability to showcase romances that are set up early to fail, not as potential victims of the personalities partaking in them, but as a result of external forces and backwards social graces. While some might argue that Guillaume and Charlotte are the architects of their own unhappiness, Lesage decides on taking a more empathetic approach, painting both of his protagonists as victims of social structures that value selfishness and cruelty over basic human kindness. Both Guillaume and Charlotte experience the ugly side of human nature first hand, but in different ways that speak to the noticeable, but in no way massive generational gap between them. Guillaume idolizes the likes of J.D. Salinger and Morrissey – two people who teach many young and impressionable young men the “value” of being casually cruel and detached – while his teachers (particularly an odious, lascivious history proctor, played exceptionally well by Paul Ahmarani in a small, pivotal role) try to prepare their young charges for the cutthroat nature of the white collar world. Charlotte, on the other hand, knows that such cruelty exists in the world, but she puts blinders on whenever she feels comfortable and at ease with herself and those around her.

That’s all rather fascinating subject matter that most coming of age stories don’t always dabble in, but there’s a massive problem at the heart of Genesis that keeps Lesage’s film from being more impactful. The viewer knows everything possible about the side characters in Guillaume and Charlotte’s lives, but we know very little about the protagonists outside of the context of their personal relationships. Never during the course of Genesis do they feel like their own people with unique, solidly constructed desires. They seem single-minded, albeit sympathetic and relatable, and not like fully fleshed out characters. Lesage is putting more emphasis on the margins of Genesis and not on the actual text and substance, but thankfully Pellerin and Abita are exceptional enough performers to bring a lot more from the material than what’s written on the page.

The style of Genesis is also confounding and hard to describe. The shadow and sunlight heavy cinematography from Nicolas Canniccioni is top notch, and Lesage’s adherence to a bright and colourful aesthetic is nicely punctuated by drab notes when characters are at their lowest. But there’s a sense throughout Genesis that Lesage wants his film to have a timeless quality. It’s a bold move, but carried out with equal parts rigidness and inconsistency that further takes away from his already hobbled main characters and adds an unnecessary element of confusion. It takes quite some time into Genesis before someone uses a cell phone or computer, and when that’s combined with the stripped down fashion choices (not just in Guillaume’s conservative minded private school, but also in Charlotte’s artsier world) it’s almost impossible to get a handle on when this is all supposed to be taking place. The dialogue also hedges its bets in establishing any sort of formal time frame, leading to characters that sound more robotic than passionate. Matters aren’t helped by an eclectic, decades spanning soundtrack that repeatedly leans on the same tracks for different scenes without necessity, most notably The Trashmen’s “Surfin’ Bird” and TOPS’ “Outside,” and neither of which adds much of anything. It’s commendable that Lesage wants to make sure his film about young people ages well and speaks to different generations at the same time, but by not making concrete decisions, the film struggles to find an authoritative voice.

Genesis also pivots into yet another unrelated subplot for its final twenty-five minutes, dragging the film unnecessarily and indulgently across the two-hour mark for not that great of a reason. After the plots involving Charlotte and Guillaume reach their bittersweet conclusions, Lesage ditches them to check in on Félix (Édouard Tremblay-Grenier), one of the main characters from one of the director’s previous films, Les Demons. The younger Félix is at a summer camp and trying to work up the courage to ask out the girl he has a crush on. There are some subtle parallels here to Guillaume’s story (most notably in the scene that kicks off this particular movement of the film), but on the whole, Félix’s storyline is a wildly unnecessary and selfish coda on a story that already reached a much better conclusion. I can’t think of any logical reasons for this story other to be included as a part of Genesis except to send things out on a gentler note than the rest of the film before it or because Lesage felt he wouldn’t have a chance to tell this story otherwise. It’s not poorly executed by any stretch, but it also doesn’t add anything new or enlightening.

It sure sounds like I don’t like Genesis, which was selected for TIFF’s Canada’s Top Ten and saw a proper Toronto theatrical release earlier in the year as a result. In truth, I very much like what it’s trying to say, and I feel like the truthful moments of Lesage’s work far outweigh the unnecessarily convoluted delivery system he has constructed to relay them. It’s a film with very little middle ground. Most of the scenes are excellent, but some sequences and many of the details are frustratingly underdeveloped or overdeveloped. Still, it mostly holds together and many of the individual storytelling elements are great. It’s a unique and singular vision worth supporting, even if the construction could better match the story’s overall artistic ambition.

Genesis screens as part of the Quebec on Screen series at The Royal in Toronto on Friday, July 5, 2019 at 9:30 pm and Sunday, July 7 at 8:15 pm. It is available nationwide on iTunes starting July 9.

Check out the trailer for Genesis: