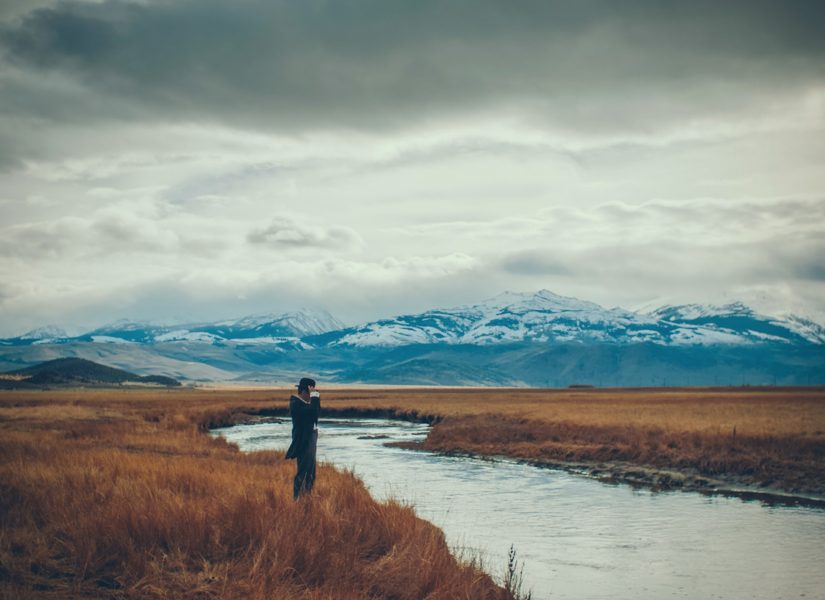 Brazenly uncompromised and assuredly experimental, Quebecois filmmaker Maxime Giroux’s surrealist allegory The Great Darkened Days is the rare breed of psychedelic freak out that’s both politically motivated and assuredly made. It’s a kind of strange, unusual, and borderline inscrutable bit of art cinema the likes of which hasn’t been made for the past forty or fifty years, and yet, it’s a period piece set earlier than that and a story meant to reflect on the current issues of the day. I can understand and even sympathize with those who vocally can’t stand Giroux’s follow-up to his infinitely more accessible critical success Félix and Meira, but the sheer audacity of The Great Darkened Days is something to truly behold, and heed, whether you end up loving it or hating it.

Set, one assumes, sometime around the era of the Second World War, The Great Darkened Days follows the tragedies and setbacks suffered by Philippe (Martin Dubreuil), a draft dodger from Quebec hiding out somewhere in the American West. Philippe ekes out a meagre existence by entering celebrity impersonator contests where he portrays Charlie Chaplin. After he’s robbed by some thugs and notices that the world around him is growing increasingly violent, divided, and desperate, penniless Philippe sets out on a journey towards Detroit, where he can stay with his uncle to wait out the rest of the war before safely returning to Montreal.

Giroux and co-writers Simon Beaulieu and Alexandre Laferrière set a menacing tone early on in The Great Darkened Days, but once the road trip aspect of the film kicks off, things fly off the rails in a hurry, never to return until late in the film when the protagonist is literally riding on a train. After about twenty minutes amid the stunningly realized sagebrush and ghost towns of the decaying old west (captured with vivid, full frame cinematography by Sara Mishara), Giroux makes it abundantly clear that The Great Darkened Days exists in its own alternate version of reality. There’s a song cue – involving an instantly recognizable rock song blaring out of a 1940s era automobile – that will prove to be the dividing line between those willing to see what Giroux has in store next for viewers and anyone who would prefer that their whimsy and political allegories didn’t mix.

And politics are assuredly first and foremost on the mind of Giroux and his collaborators, with The Great Darkened Days emerging as an overwhelmingly critical look at modern day American policies and social movements. Along his journey, Philippe meets a talent agent (Reda Kateb), a widower (Sarah Gadon) with an unusual “pet,” a human trafficker (Romain Duris), and a travelling cigarette salesman (Cody Fern) who seemingly appears from out of nowhere. All of them represent various aspects of American protectionism and isolationism, and through their interactions with Philippe, Giroux speaks to a lot of hot button issues regarding immigration, war mongering, and the American inability to accept losing as a possible outcome of any geopolitical situation. There’s a frequent suggestion, particularly from the talent agent, that things in Canada might not be any rosier, but there’s no mistaking The Great Darkened Days as a portrait of American in decline filtered through numerous surrealist lenses.

The story plays on screen like Terry Gilliam trying to simultaneously adapt Steinbeck and Joyce at the same time, which is about as “take it or leave it” of a comparison as I can come up with. Giroux cycles through various different tones at a wild, blistering pace, which is befitting for a film built around a cypher of a main character who impersonates one of cinema’s greatest on-screen everymen, The Tramp. With a single edit, The Great Darkened Days can go from being a story about friendship in a harsh world to a sick and twisted horror flick without losing a step. Just as the weather in the west can go from blistering heat to blizzards overnight, Giroux’s film refuses to acclimatize itself to any and all audience expectations. If a particular genre or setting is going to help forward his message the best, Giroux will immediately jump across without hesitation. Some might find it dazzling, others whiplash inducing.

The Great Darkened Days is a purposefully divisive movie made for divisive times, and while it feels like there should be a lot more to this story, Giroux cuts things off at a rather interesting point, suggesting that going further would be to revel in excess. It won’t force people to engage with it, and yet its aims are forceful. One might wonder if The Great Darkened Days was worth all the obvious craft and trouble that went into making it. I would argue that – while the results are uneven and not always on target – Giroux nails the points he wants to make about complacency in a cruel world. The Great Darkened Days is a rallying cry against the belief that good people need to keep their mouths shut as the world inches closer and closer everyday towards its eventual social collapse. It’s not a film that wants people to feel apathetic about it. It just begs the viewer to feel something at all. I normally have a hard time with films that mix whimsy and surrealism with pointedly serious messages, but The Great Darkened Days is the rare example of such a concoction that actually works.

The Great Darkened Days screens as part of the Quebec on Screen series at The Royal in Toronto on Saturday, July 6, 2019 at 6:00 pm and Sunday, July 7 at 6:00 pm. It is available nationwide on iTunes starting July 9.

Check out the trailer for The Great Darkened Days: