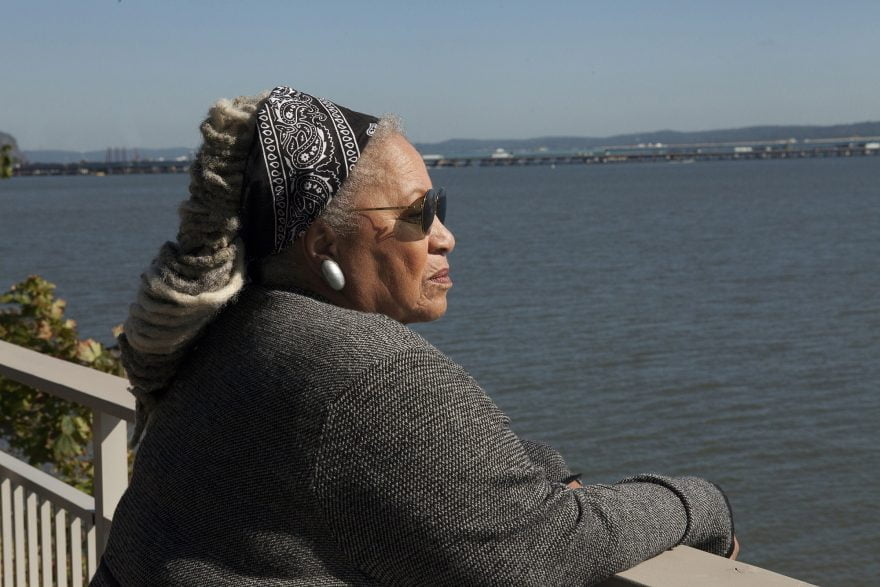 Toni Morrison: The Pieces I Am

At one point during Timothy Greenfield-Sanders’ biographical documentary Toni Morrison: The Pieces I Am, writer and interviewee Walter Mosley describes the film’s subject as someone who could take unimaginable pain, suffering, and everyday hardships faced by black people and turn it into something pedestrian. He doesn’t mean this as an attack on the Nobel Prize winning author, nor does he mean it as a backhanded compliment. It’s an honest reflection of the sort of humanizing power Morrison commanded over readers, and how she was able to bring subject matter that most white authors wouldn’t touch to massive, worldwide audiences. Toni Morrison: The Pieces I Am serves as a nice reflection on what Mosley is trying to say about Sanders’ subject. It’s a rather basic talking heads documentary in terms of its overall construction, and not everything about Morrison’s life is being covered, but as a primer on what makes her such a great writer and social activist, it’s a well crafted work with plenty of substance.

Morrison walks Sanders and interviewer/producer Sandra Guzamn (who really should have a co-director credit here) through her life, works, controversies, and opinions, bouncing back and forth along the timeline of her career; one that didn’t really take off professionally until her children were grown up and moved out of the house. She was born as Chloe Wofford in the American midwest; in a steelworker town on Lake Erie among a population predominantly made up of immigrants and people of colour. Her parents did their best to provide for her during a time when being impoverished wasn’t as stigmatized and looked down upon as it is today. She got a good education, spent a lot of time honing her craft in her school’s drama department and then working as a literature professor; eventually became one of the most influential book editors at Random House. While working her desk job, Morrison was quietly producing works of her own, including her debut novel The Bluest Eye, a confident and provocative work that calls its own shot literally on the first page.

Morrison’s story is an inspirational and aspirational one by any sort of metric, but what made her a game changer in the literary world was the fact that – at the time – she was one of only an infinitesimally small number of authors writing from a strictly and uniquely black perspective, and assuredly the first to most prominently place black female characters at the head of their novels. Her influence and cultural impact as a writer shouldn’t be understated, and yet, in her early years, even some of her most supportive critics attempted to downplay her contributions, with Sanders and the interview subjects expertly showcasing how even praiseworthy criticism can be detrimental to an author’s cause and work. Toni Morrison: The Pieces I Am is more than an elementary level “rags to riches” story, but rather a look at someone who wanted to seriously examine those rags and those riches through the lens of black history and culture, something many critics and scholars either couldn’t or refused to engage with because she was writing about things that the predominantly white and male establishment didn’t comprehend.

Toni Morrison: The Pieces I Am benefits most from having the direct participation of the author. For the majority of Sanders’ film, the usually private and sometimes publicity averse Morrison is front, centre, and telling her story in her own words. It’s clear from the opening seconds of Toni Morrison: The Pieces I Am that the viewer and the filmmakers are in the hands of an eloquent, masterful storyteller. Even away from the page, Morrison exudes confidence and a way with words that will make even the most casual of observers stop to take notice. She’s the rare sort of speaker and writer that can make people stop in their tracks and absorb the most seemingly random of anecdotes because Morrison has the power to find meaning in anything and everything in her life. A story shared early in the film where Morrison relates a childhood memory that taught her the power of the written word is equally silly, jovial, and overwhelmingly loaded with subtext to give viewers a better sense of her personality.

She was a teacher who pushed her students, an editor of esteem who used her position of power to publish works most mainstream outlets wouldn’t touch (including the overseeing of autobiographies by activist Angela Davis and politically minded athlete Muhammad Ali), and a writer who refused to compromise of censor her perspective, and it’s a credit to Sanders and his team that Toni Morrison: The Pieces I Am places all these aspects of her career and approach on equal ground, never separating one experience from the others and preferring to view her life in totality at all times. 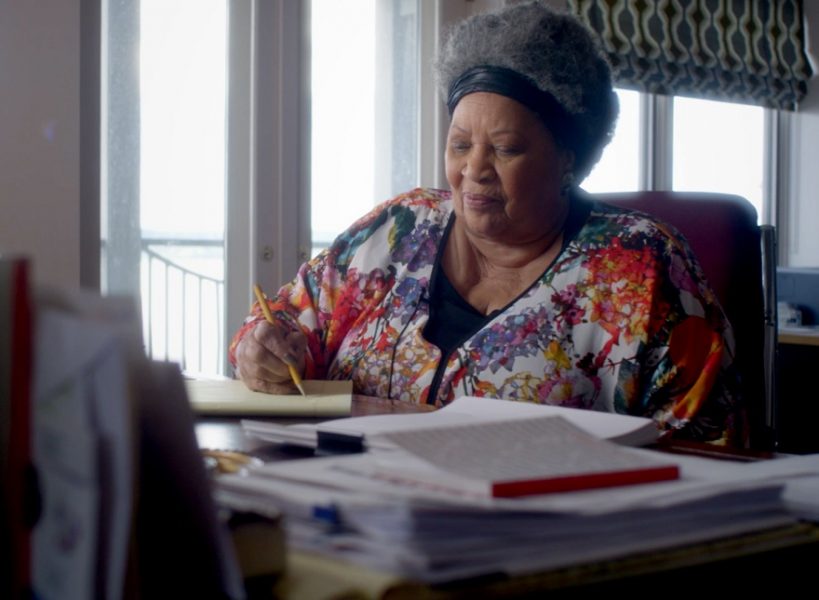 It’s a true privilege to be able to learn about Morrison and her process on such a direct level. Her passion, force, humour, cadence, and mastery of the English language and the art of discourse elevates Toni Morrison: The Pieces I Am to a higher level than most boilerplate biographical documentaries. It’s like an unassuming, but reliable automobile that has somehow been tricked out with a locomotive engine. Here is a woman who knows perfectly well her talent and her worth, and she genuinely wants to see other realize that in themselves.

Amid the wealth of archival footage are a well selected handful of external interview subjects who can confidently and articulately speak to the nature of Morrison’s work and life, including, perhaps most obviously, Oprah Winfrey, who selected four Morrison works for her book club and shepherded the cinematic adaptation of the novel Beloved to the big screen.. Unlike many other documentaries about famous people, the other interview subjects in Toni Morrison: The Pieces I Am aren’t trotted out to merely fawn and gush over the subject’s genius. They’re on hand to provide actual context, and to walk viewers through Morrison’s method and the impact her work had on the literary industry. The interview subjects will happily speak about what Morrison means to them personally, but they’re much more engaged when talking about the author’s greater contributions on a macro level.

But for as lengthy and well rounded as Toni Morrison: The Pieces I Am feels, there are still plenty of “pieces” missing. At one point, Morrison bluntly states that she wasn’t previously the kind of person who would’ve taken part in a documentary about herself, and there’s still a lot about her life that remains somewhat mysterious. She never speaks about her kids for more than a few seconds, and never in an intimate manner, despite the fact that at one point she straight up mentions that she left them behind with her mother for a good period of time while she pursued her career as an editor. There’s no talk of her husband. Details about her family life are told almost entirely through anecdotes that offer almost no specifics whatsoever outside of saying that her parents were “physical.” She lovingly talks about her work in creating The Black Book in great detail, but not a single mention that the introduction of that work was written by Bill Cosby. For as much as Morrison is forthcoming about her successes and setbacks, she still doesn’t want to talk about anything remotely personal or all that controversial (outside of some school boards banning her books for perceived “pornographic” content).

At one point, Morrison calls out famous black writers like Frederick Douglas and Ralph Ellison for essentially holding back their heritage and writing in ways that white audiences can understand. While Morrison never shies away from her blackness – and she sympathetically understands why so many African-American writers would work in such a way – she too is guilty of holding back truths that she seemingly doesn’t think audiences would understand. (It should also be noted that Sanders is a white filmmaker, and the conservative directorial approach certainly implies that his film is made with the intention to explain Morrison to white audiences.) By that same token, one thinks that Morrison would reach such a criticism and not be particularly apologetic about it, and  that’s her choice; not mine or the filmmakers’.

Toni Morrison: The Pieces I Am is a good documentary about a remarkable talent, outspoken activist, and industry game changer, but it’s also a film that’s clearly being steered and dictated by the subject and not by the filmmakers. That’s of little consequence when the film’s subject is so passionate, engaging, and energetic – even at the age of 88 – but it’s also what keeps the film from being comprehensive. Still, as a testament to Morrison’s enduring legacy and why her words matter so much, it works exceptionally well and it feels like there’s nothing missing. Morrison writes and edits her own story seemingly as she speaks it, meaning Sanders’ job is pretty much done for him. It’s a hard approach to argue with, and the film is a rather spectacular monument to Morrison’s talent.

Toni Morrison: The Pieces I Am opens at The Hot Docs Ted Rogers Cinema in Toronto on Friday, July 5, 2019. It opens in Montreal on July 12 and expands to additional Canadian cities throughout the summer.

Check out the trailer for Toni Morrison: The Pieces I Am: