Review: Touch Me Not 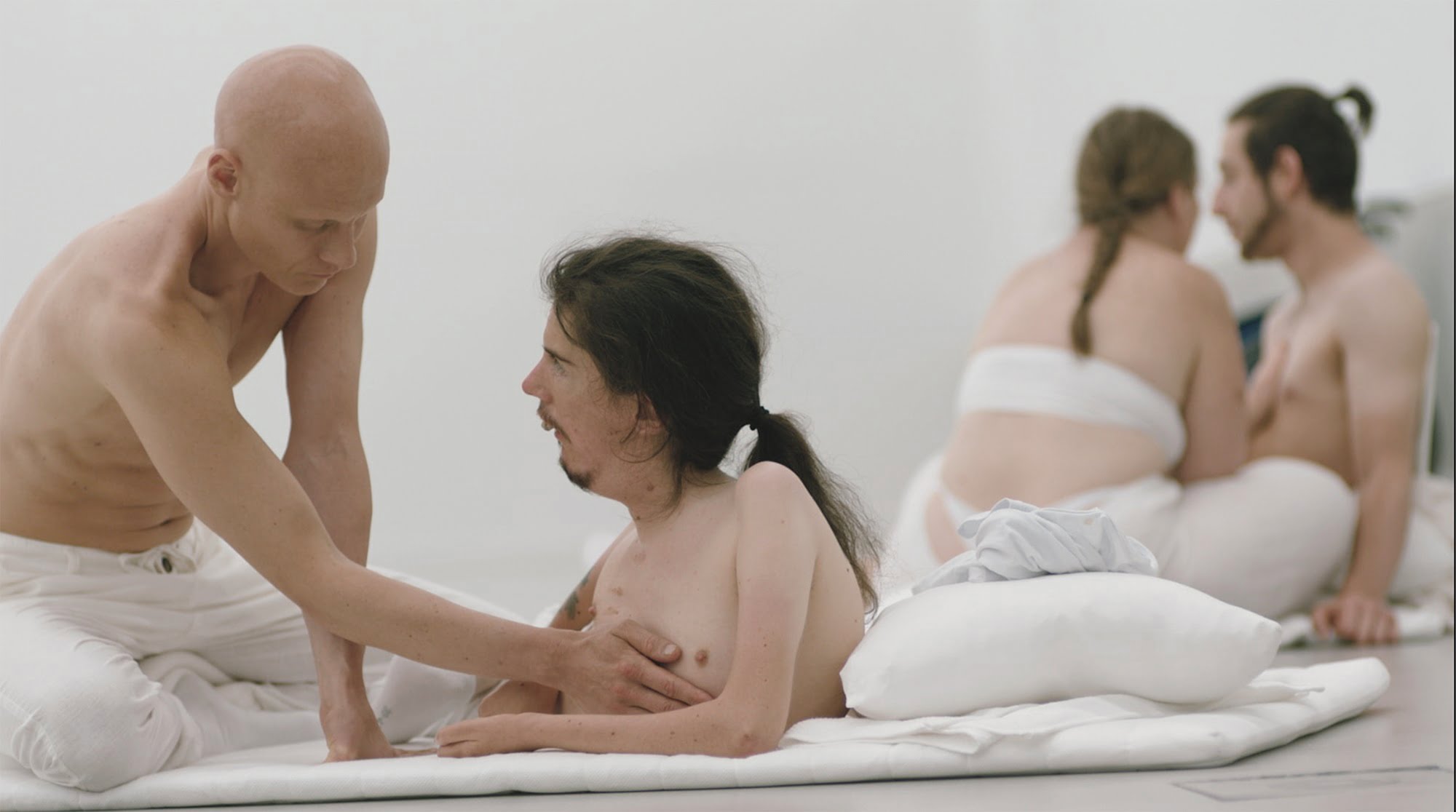 Touch Me Not, the first feature effort from Romanian filmmaker Adina Piatilie, is a peculiar, but valuable docu-fictional examination of sexual frustration. Piatile, who picked up the coveted Golden Bear at Berlin last year for her efforts here, conceived Touch Me Not as half research project and half artistic endeavour, blurring the lines between fact and fiction with the help of a cast of professionals and non-actors interacting and discussing very real, extremely frank, and intricately detailed attitudes about human sexuality. While I would probably argue that Touch Me Not is more successful in its analytical and clinical researching aims than it is as a work of art, there’s little denying that Piatilie has crafted something important. It’s a bold film that seeks to destigmatize sexual dysfunction or other barriers that could inhibit a healthy libido. There’s no judgment to be found and plenty of empowerment and empathy.

There are two parallel, but slightly intersecting threads running concurrently throughout Touch Me Not, framed around recreations of events, seemingly natural moments of sexuality, and interviews conducted by Piatilie with the aid of an Errol Morris styled interrotron. Laura (Laura Benson) has been selected for the project by Piatilie because the filmmaker sees some similarities between their situations, although the subject’s triggers seem a lot more severe than the director’s. Laura can’t stand being touched, and it’s starting to trouble her to the point of tears and even greater mental discomfort. She tries to find solace and answers by spending time with a transsexual sex worker (Hanna Hofmann) and a male escort who specializes in a unique form of BDSM therapy (Seani Love).

The other half of the film concerns Tómas (Tómas Lemarquis), who has battled self-esteem issues since the age of thirteen when he was diagnosed with alopecia. He’s seeking equally holistic methods of rejuvenation, and he finds a friend in Christian (Christian Bayerlein), a wheelchair bound man who has a severe form of spinal muscular atrophy. Christian has a loving, committed, and sexually fulfilling relationship with his partner (Grit Uhlemann), and he has learned to love his body in ways that Tómas wishes he could. Christian’s biggest concern when it comes to intimacy is that he’s always dreamed of sex being more than just a passive act for him and that his body could move more freely. Through his friendship with Christian, Tómas will learn to accept others for who they are and accept himself a bit more. Tómas shows intense gratitude at being able to speak with someone as plainly and openly about sexuality as he is with Christian.

Benson and Lemarquis are professional actors, but they are speaking about matters of sexuality that are very close to their own experiences, which adds an immeasurable amount of transparency to Pintilie’s hybrid docu-fictional construction. For the most part, Touch Me Not feels like an artfully staged form of documentary, where the sets are obviously designed with a specific aesthetic in mind, but the situations are allowed to play out organically and without manipulation. It’s only around the halfway point of Touch Me Not that the film’s fictional storylines start to become more apparent, and they turn out to be the least interesting aspect of the project. Touch Me Not, like the on camera participants, is at its best when it’s being truthful. 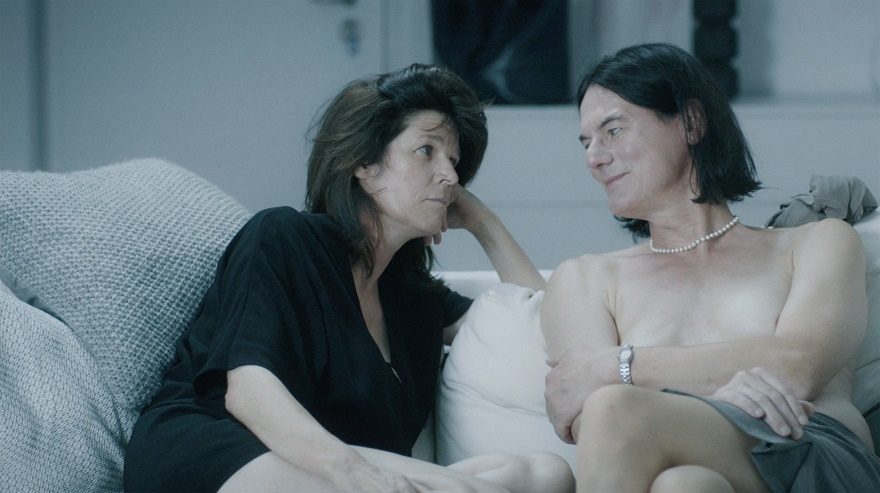 It certainly couldn’t be an easy film to make. Setting aside the unflinching and explicit depiction of sex throughout the film, Touch Me Not asks its participants for something even more intimate and discomforting. Pintilie asks her participants and performers to talk openly about the deeply troubling feelings that they seek to move past. Getting past these issues can’t be done without parsing deeply rooted traumas and insecurities, and to do so in such a public forum is something immensely brave and worthy of commendation. Large sections of Touch Me Not play out like extended therapy sessions, mostly because that’s precisely what’s being depicted. Even if Laura and Tómas aren’t always spelling out what’s on their mind, Touch Me Not features people being brutally honest about their struggles. Everyone here is willing to explore the boundaries of their own personal definitions of intimacy and asking themselves – within reason and with consent – how far they’re willing to go.

That question extends to the viewer, as well, and Touch Me Not is a cinematic road that some might not feel brave enough to travel down, which is perfectly understandable. At the same time, empathy for others is frequently found only through the experiencing of great discomfort, and the social taboos that often surround sexuality, intimacy, and relationships are often hard to talk about without diving headlong into them. For people like Laura and Tómas, talking about intimacy issues is just as difficult as experiencing sex itself, and one gets the sense that Pintilie (who’s also playing herself on screen) feels similarly. In spite of all of the explicit language and nudity, Touch Me Not isn’t meant as a work of provocation or exploitation. It’s meant to act as a sort of deductive cinematic essay. It’s not particularly erotic (although certain people might find such honesty as a turn-on), but it’s undeniably intimate.

Touch Me Not mostly works, but there are some elements that feel somewhat overthought and showy. Outside of some noteworthy shots and sequences – particularly a close-up paired with narration that switches from a male to a female body without the viewer noticing and a trip to a bondage club – there’s an overwhelming sterility to Touch Me Not. Most of Pintilie’s sets and locations are minimalist, designed mostly with the colours black, white, and gray front and centre. I imagine such a choice is designed to provide a clinical sort of safe space to tackle such delicate subject matter, but it’s also a bit heavy handed, especially whenever something obviously artificial arises (which is rarely, but still jarring when it happens). There’s also a lot of filler here, and some indulgent artistic asides that don’t add much and cause interest in the overall substance of the film to ebb and flow.

Such criticisms of Touch Me Not might arise from it being Pintilie’s first feature, but there could be something deeper in play. Pintilie admits to Laura at the start of the film that she’s not sure exactly what she’s trying to say or where she wants to go with this project. Touch Me Not doesn’t take very long to find out what it’s trying to say, but that Pintilie is unsure of whether or not she wants her work to stand for something greater or be taken solely on the merits and messages found within the stories being shared. She’s not asking her cast to answer any questions that she wouldn’t feel comfortable discussing herself, but Pintilie also never seems assured of what she wants to do with those responses. In the end, it’s not for the viewer to pass judgment on or diagnose any of the people on screen or behind the camera. There are many different ways to experience pleasure, and almost as many ways that searching for such euphoria can cause people great amounts of emotional pain and mental torture. In that respect, Touch Me Not is an imperfect experiment, but also a valuable, empowering film that people can learn from. That’s far better than being perfect.

Touch Me Not opens at TIFF Bell Lightbox in Toronto on Friday, August 23, 2019. Filmmaker Adina Pintilie will participate in a Q&A following the 8:30 pm screening of the film on Friday the 23rd.

Check out the trailer for Touch Me Not: