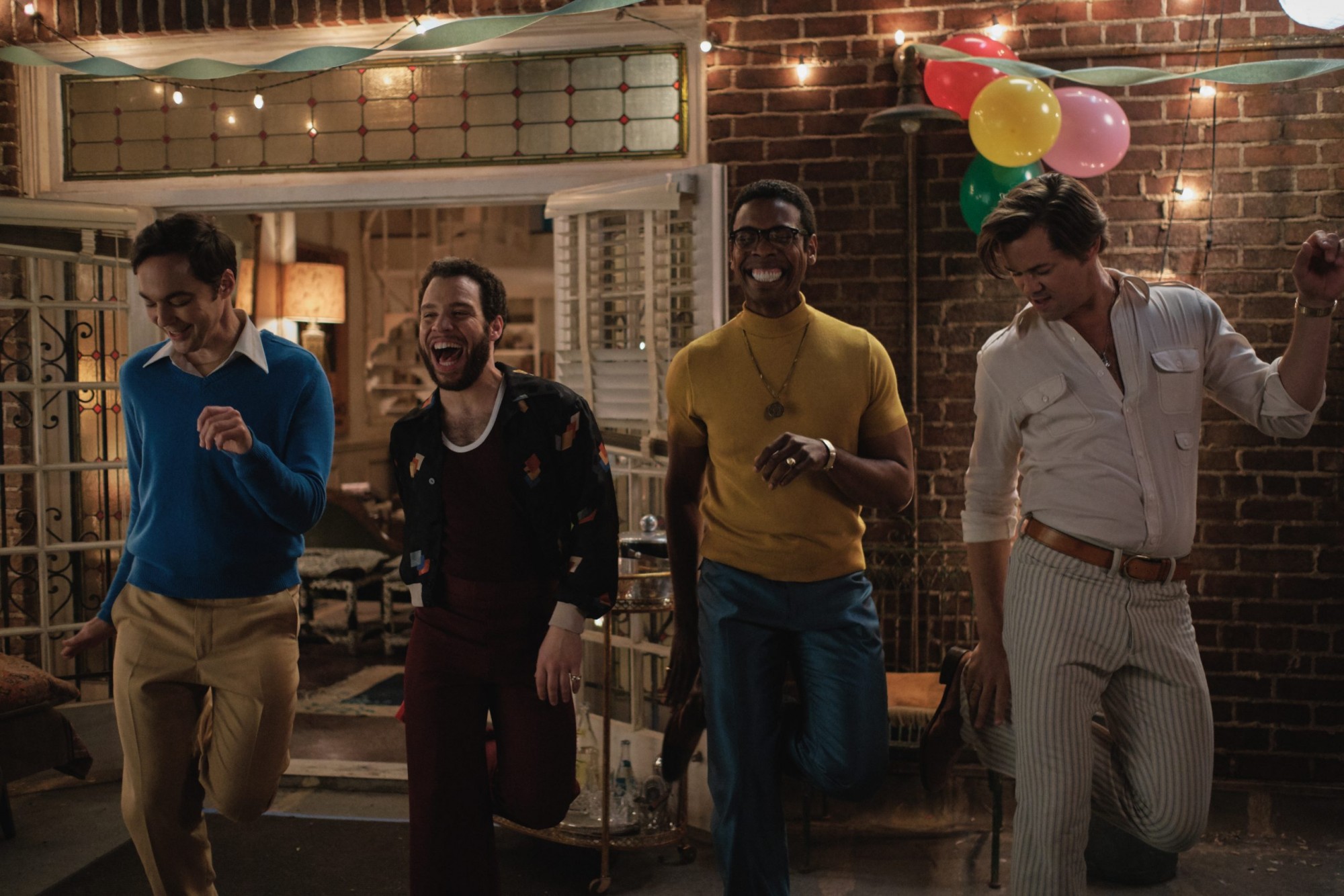 Joe Mantello’s cinematic updating of Matt Crowley’s seminal LGBT play The Boys in the Band is a great example of how one can make something visually and dramatically captivating for the screen while retaining everything that made the stage version special. The second major film based on Crawley’s play (following director William Friedkin’s 1970 effort), this new version of The Boys in the Band reunites the cast and director of the 2018 Broadway revival of the show and visually expands their world beyond the show’s living room setting. Crowley’s play was already a solid piece of writing, and the cast members here all put in their best efforts, with Mantello finding creative ways of further elevating the material.

Set in 1968 New York City, The Boys in the Band revolves around a group of gay, male friends coming together to celebrate a birthday. Michael (Jim Parsons), who’s throwing the party at his place, is frantically trying to put final preparations in order. Michael’s neurotic, openly self-loathing partner, Donald (Matt Bomer), has arrived earlier than expected after being blown off by this therapist. Flamboyant Latinx antiques dealer Emory (Robin de Jesus) brings the lasagna, a gigolo who’s terrible at his job (Charlie Carver), and a lot of energy. Larry (Andrew Rannells) and his older partner Hank (Tuc Watkins) try to put on brave and happy faces, despite being in the middle of an ongoing argument about the exclusivity of their relationship. Bernard (Michael Benjamin Washington) might be the kindest and most thoughtful soul of the bunch, but he’s wrestling with the prejudices one faces by being both black and gay. Laid back and ice cube cool birthday boy Harold (Zachary Quinto) is late, as per usual. On top of these friends, the party is crashed by Alan (Brian Hutchison), a straight, narrow minded former classmate of Michael’s who desperately needs to tell the host something important, but he can’t figure out how to say it.

The Boys in the Band is clearly the final product one gets when a director and their cast understand their material like the backs of their hands. Crowley’s material (aided by co-screenwriter Ned Martel) does get bogged down at times by the static nature of watching people at a party talking to one another, but the dialogue and performances (all from cast members who openly identify as gay) keep things vibrant, intense, and either funny or heartbreaking depending on what’s being called for in a given scene. It’s the kind of material actors would likely jump at the chance to work with, since there aren’t any bad characters in the bunch.

Outside of his instantly recognizable voice, Parsons digs deep to deliver his best performance to date. Michael is a recovering addict and noted “mean drunk” with a lot of repressed baggage. The more stressful and combative the party gets between its guests, the worse Michael gets, with Parsons incrementally making the character appear ever so slightly more drunk, irate, boorish, and outright cruel with each passing moment. It’s a performance so layered and intricate that it builds without the viewer even noticing what’s happening until it’s too late for the character to turn back and repent for some of the things he’s said. 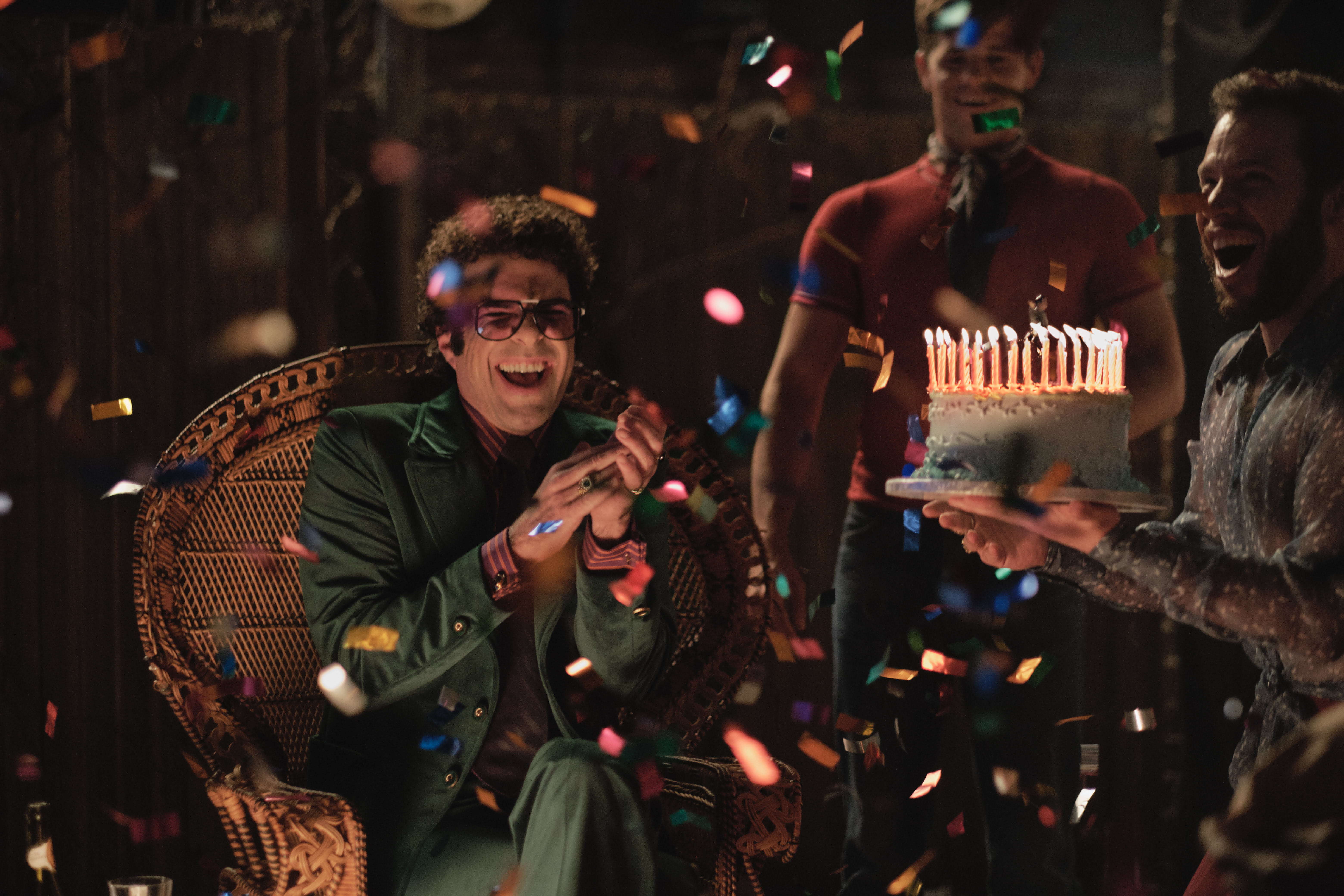 Quinto provides the necessary ice to Parsons’ fire, offering an equally impressionable performance that makes one think of 1970s era Elliott Gould combined with Katherine Hepburn’s ability to cut someone’s throat with a deadpan quip. Hutchison nicely balances his character’s prejudices and increasing desperation without devolving into caricature. Bomer, Washington, and de Jesus all take characters that could’ve been queer cliches to find subtle nuances, making sure none of them blend into the shadows of the story’s more upfront figures. The low key MVP, however, might be Watkins, who gets the film’s most gut-wrenching moment during a party game that has gone horribly off the rails (and was a terrible idea in the first place.) With that one tearful scene, Watkins almost steals the entire film.

The Tony award winning 2018 stage revival of The Boys in the Band commemorated the 50th anniversary of Crowley’s play, and this remake of that material comes in time for the same anniversary of Friedkin’s film (and in some ways as a tribute to the playwright, who passed away earlier this year). While those versions were far ahead of the curve, it’s interesting to note the historical significance of The Boys in the Band in the years following the height of the AIDS crisis. While the characters at the party are (at this point) blissfully unaware of that looming threat, there are plenty of other struggles illustrated here that are still faced by the LGBT community today: code-switching between being closeted and out and proud, flamboyant personalities being told to tone it down, monogamy, dealing with religious faiths that can make one feel like a sinner at all times, addictions, depression, differing views on queerness. What makes The Boys in the Band hold up so well today is just how much things haven’t changed in the past fifty years for many people who will likely see themselves in some of these characters. It’s like being invited to a sad party to have a good cry with people who understand what the viewer might be going through.

I often find myself talking about how films based on stage plays try and fail to hide the roots of their production, but The Boys in the Band does its best to feel vibrant and kinetic thanks to the contributions of master cinematographer Bill Pope (The Matrix, Spider-Man 2, Scott Pilgrim vs. The World). There seems to be an unspoken acknowledgement between the director and his cast that they have to do something special to make this version of The Boys in the Band somehow less stagey than the material suggests, and Pope is the key to making that happen. From the flashy opening montage that shows each character going about their daily business in the lead-up to the party, Pope throws down a gauntlet, promising the viewer that he’s going to do his best to make this material appear cinematic. He does an effortless job once the party shifts into high gear, moving through the spaces of Michael’s split level apartment and adjoining balcony like one of the guests. There are some points where things have to slow down out of necessity, but Pope’s involvement and the director and cast’s attention to fine details work perfectly in tandem. It’s one of the most visually eye-catching play-to-film adaptations in quite some time.

The Boys in the Band might not be doing much of anything new with its material, right down to the inclusion of language that could charitably be called “of its time,” but now feels like a crutch meant to shock modern audiences. But even if it’s not updating the story or characters, Mantello’s film, the performances, and the style employed are doing the best by the material. Everything about this feels like the best case scenario, outdoing many stagings that have come before it.

The Boys in the Band is available to stream on Netflix starting Wednesday, September 30, 2020.