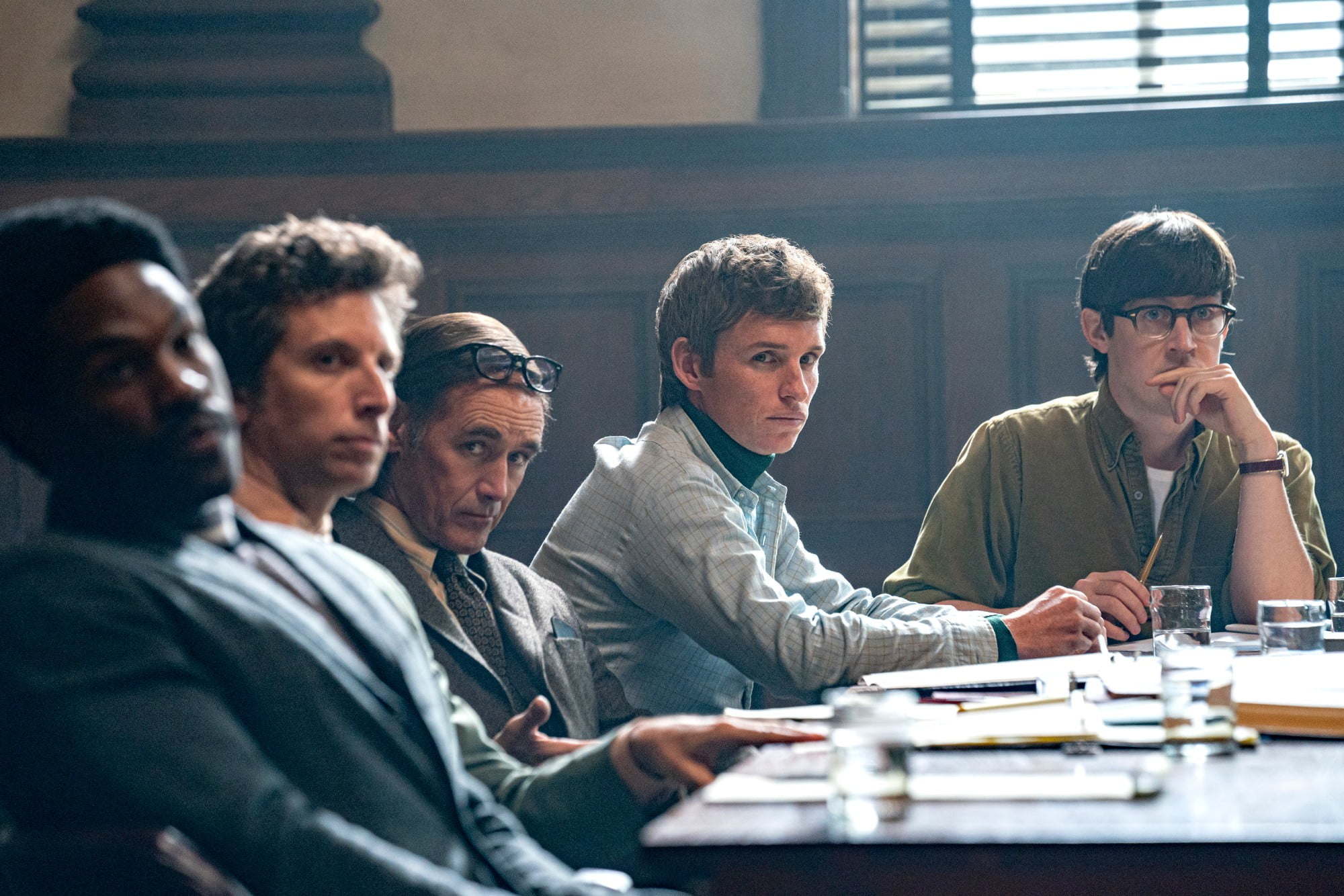 The Trial of the Chicago 7, the latest from writer-director Aaron Sorkin, is a basic, but well crafted and intelligent period courtroom drama that bristles with newfound political relevance within its margins. It’s a better directorial effort for Sorkin than his previous feature (the skittish Molly’s Game), but there’s still a heavy insinuation that the esteemed screenwriter still has trouble editing himself, offering up yet another overstuffed narrative with interesting threads left frustratingly unresolved. But the difference between The Trial of the Chicago 7 being somewhat successful and his debut directorial outing missing the mark is a considerable amount of fire in the belly this time out. The Trial of the Chicago 7 is an impassioned cautionary tale built upon the strength of its convictions. Plenty of films have been constructed around the old adage stating those who don’t listen to history are doomed to repeat it, but Sorkin and his ensemble of esteemed actors are fully invested in conveying that perpetually timely message.

During the watershed year in American history that was 1968, the Vietnam war was reaching its bloody, fruitless apex, Robert Kennedy and Martin Luther King Jr. were both assassinated, and the political divide between the left and right was greater than it had been in decades. During that year’s Democratic National Convention in Chicago, a riot broke out, with protestors clashing with police and the National Guard. At the time, no charges were filed because the attorney general at the time didn’t find any federal laws being broken. But when the democratic Johnson administration gave way to the republican Nixon regime several months later, that all changed, with eight outspoken activists who were all in or around the Chicago riots facing charges tied to an obscure statue revolving around interstate transportation (an antiquated piece of legislation drawn up originally to suppress the voting rights of black people). It was a trial fraught with miscarriages of justice and unfavourable outcomes for the activists caught under the thumb of the Nixon administration.

The Trial of the Chicago 7 looks and feels like a standard courtroom and governmental drama made by someone who knows this terrain almost better than any other currently working screenwriter. Sorkin could’ve probably sleepwalked through this and turned in something halfway compelling, but the passion and empathy at the heart of The Trial of the Chicago 7 makes it worthwhile viewing. None of the objections being raised, combative witnesses, or underhanded prosecutorial tactics will shock anyone familiar with the genre (or the real life case, which is altered here for obvious dramatic purposes), but Sorkin keeps things moving at a quicker pace than one might expect and with a firm ear to the themes that matter most.

The biggest drawback to making a two hour film that features no less than a dozen main characters is that certain elements and personalities are left to flounder or fly in the breeze for huge portions of the story. Not all of the 7 – technically 8 – defendants will be given an equal platform, with some hardly garnering a mention in Sorkin’s stage setting montage at the start. The Trial of the Chicago 7 winnows things down to a couple of key power struggles within the defendants. There’s the battle of wills between Tom Hayden (Eddie Redmayne), the youthful, but straight laced leader of the Students for a Democratic Society, and the more outlandish, countercultural and jocular leaders of the yippie movement, Abbie Hoffman (Sacha Baron Cohen) and Jerry Rubin (Jeremy Strong). There’s also the prominent matter of the eighth defendant, embattled Black Panther leader Bobby Seale (Yahya Abdul-Mateen II), who was barely in Chicago at the time, has never met most of the other accused, and seems to be on hand only to give the prosecuting attorney (Joseph Gordon-Levitt) a black face that can scare an all white jury.

None of the characters in The Trial of the Chicago 7 are defined by their loves, hopes, desires, or fears. Sorkin doesn’t have time for that. All of the characters here are defined solely by their beliefs and ideologies, which leads to some great speeches, but does a slight disservice for anyone who might want to learn more about what made these revolutionary thinkers tick. Not only is it an obvious choice made by Sorkin to keep things on a steady track, but it also allows the screenwriter to come up with plenty of snappily written discourses, angry arguments, and grandstanding pleas. It’s classic Hollywood tactics, straight on until the far too polished conclusion. Following its speedy set-up, Sorkin’s film settles into a groove once the spotlight is focused on the characters he seems to find the most fascinating. It’s not the most full-bodied approach possible, but it’s all handled with some degree of care and finesse.

The absolute best The Trial of the Chicago 7 gets are a few moments where Sorkin’s script and direction step out of their static nature to deliver several viewpoints of an event a la Rashomon. A portion of the trial revolves around what happened when protestors took a stand against Hayden’s imprisonment, and it’s cleverly told through the use of dramatic recreation, the lying statements of witnesses in the courtroom, Hoffman’s snarky retelling of the events on stage at a show, and archival footage. This happens again later in the film when primary defense attorney William Kunstler (Mark Rylance) furiously confronts Hayden with a recording that suggests his client might be lying about his role in the riots. These extended sequences are brisk, refreshing, and clever, serving the film’s narrative well, while keeping the courtroom aspects of the story from growing monotonous. It’s some of Sorkin’s most ambitious and fruitful work as both a writer and director. 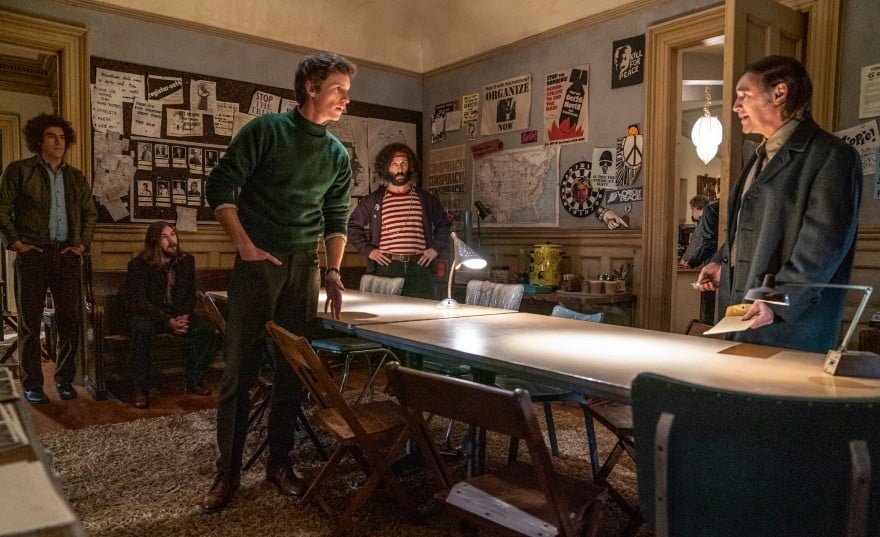 The Trial of the Chicago 7 is as much an actor’s movie as it is a screenwriter’s pet project. It’s not hard to see why Sorkin has attracted the sort of star power that he has here (even though there are no prominent roles for women to be found). Redmayne is in top form as the impassioned, but perpetually annoyed and occasionally dismissive Hayden. Cohen’s decision to portray Hoffman as a wry, intelligent, smart aleck rather than as a permastoner is a great one, especially since Strong has made the decision to play Rubin as somewhat naive and aloof. Those two offset each other nicely, and the antagonistic chemistry between Redmayne and Cohen provides much of the story’s pulse, and a great discussion of the differences and similarities between political and cultural revolutions.

Levitt doesn’t get much to do outside of his introductory scene and a chance encounter with Hoffman and Rubin around the halfway point, but he does provide some subtle, yet pronounced notes of discomfort as the morally conflicted prosecuting attorney. Mateen does an exceptional job of conveying Seale’s frustration with being denied his rights and due process, as does Kelvin Harrison Jr. in a smaller role as a fellow Panther consulting on the case in the absence of Bobby’s lawyer. John Carroll Lynch has an even smaller, but well pitched performance here as David Dellinger, a nonviolent conscientious objector and Boy Scout troop leader who also finds himself on trial. But the overall top marks in the acting category have to go to Rylance, who dazzles in every scene and boasts exceptional chemistry with all of his co-stars. Whenever Rylance takes centre stage, The Trial of the Chicago 7 doesn’t just come to life, it explodes.

Although The Trial of the Chicago 7 covers an infamous trial that shed a light on war resistance and civil rights issues, Sorkin doesn’t want to focus all of his energy on those specific aspects of the story. Instead, The Trial of the Chicago 7 uses historic precedence to talk about something far more frightening and contemporary: the lengths that a government will go to in a bid to quash dissent and punish anyone willing to speak out against unfavourable or unjust policies. Jury tampering, wiretapping, the use of antiquated and obscure laws, and turning defendants against each other are all commonplace in such trials, as is the appointment of a far-right, and probably senile judge (Frank Langella) who has already decided that the accused are guilty before the start of the trial. Sorkin just uses these details to paint a larger picture, instead of resting on each point as a narrative choice.

Sorkin wants to state – without ambiguity and in no uncertain terms – that despite what the government might say about such cases, all trials surrounding matters of dissent are political ones, not criminal. The Trial of the Chicago 7 is a great look at how the government will flex their muscles and hide behind “the letter of the law” to fight back against any and all who might criticize them. If those in power control the letter of the law, what critics could possibly be given a fair trial if the government takes them to court?

It’s a question that’s even more frightening to think about today than it was back in 1969, when this trial dragged on for the better part of a year. Once that message and reminder takes command of the core storyline, The Trial of the Chicago 7 snaps firmly into focus, making it easier to overlook some of Sorkin’s shortcomings. It bridges the past to the present without being too obvious or coy about its goals, and that might be Sorkin’s greatest achievement with his latest.

The Trial of the Chicago 7 opens in select Canadian cinemas on Friday, October 2, 2020. If seeing a film in cinemas, please take all necessary precautions. Practice social distancing, wear a mask, and stay home if feeling ill. The film will be available to stream on Netflix starting on Friday, October 16.