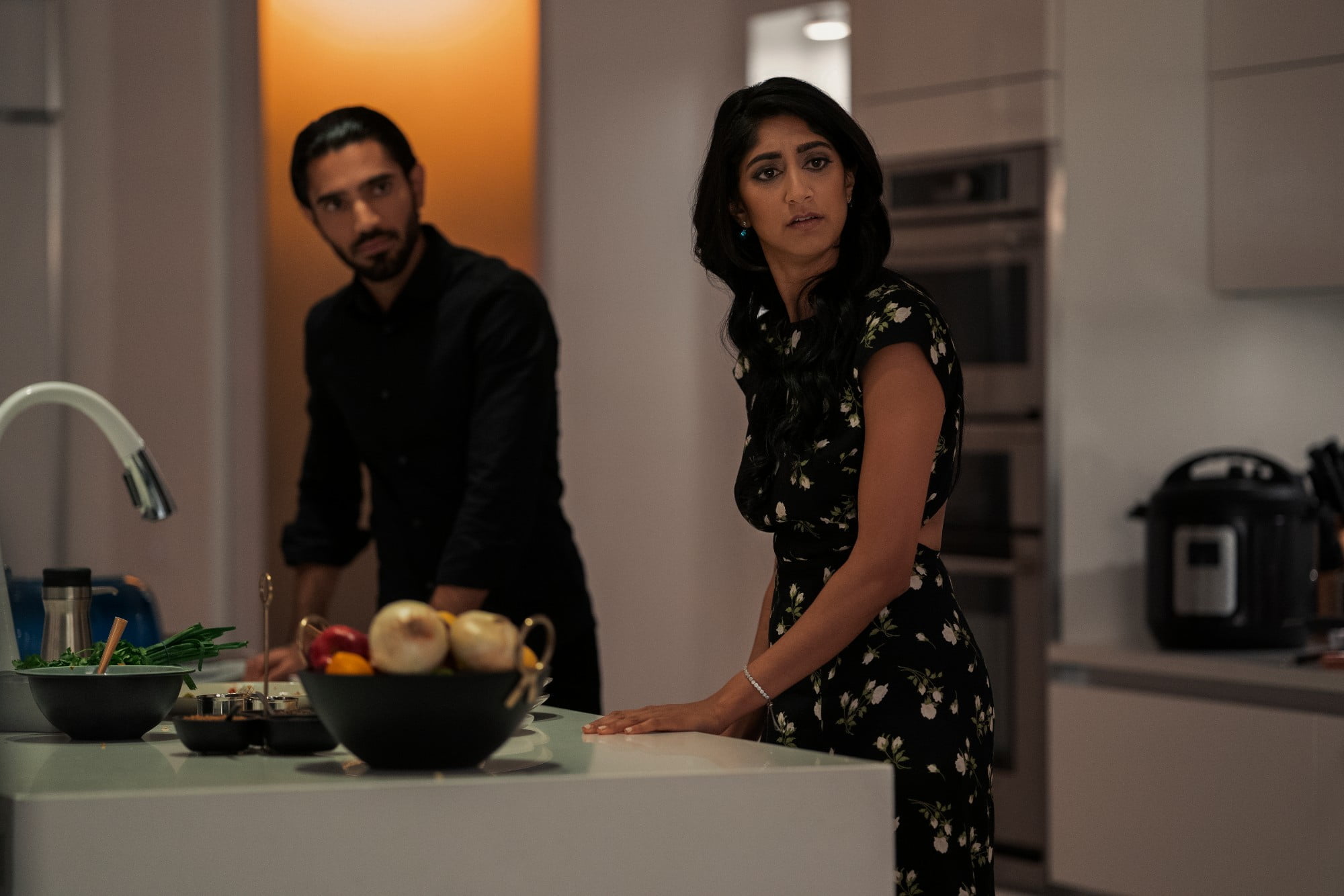 While it isn’t particularly chilling and no one would ever call it stylish, the half-psychological-half-supernatural thriller Evil Eye stands out thanks to some great performances, an underrepresented cultural perspective, and the overall thoughtfulness and depth of its material. In terms of visuals and direction, Evil Eye is pretty bad, but the performers and script elevate the film into something compulsively watchable and engaging.

Indian woman Pallavi (Sunita Mani) is almost thirty and living a mostly happily single life in New Orleans. The fact that Pallavi hasn’t found a man to settle down with is a source of constant consternation for her mother, Usha (Sarita Choudhury), back in New Delhi. A devout believer in astronomy, Usha thinks that if Pallavi doesn’t find a husband, she’s doomed to be single forever. Although she’s sick and tired of mom trying to set her up from a distance, Pallavi agrees to meet a potential new suitor. When Usha’s chosen mate fails to show up, Pallavi meets Sandeep (Omar Maskati), a suave, attractive, witty, and kind man. Their chance encounter blossoms into romance. Pallavi falls for him easily, and Sandeep is ready to propose. But something about Sandeep doesn’t sit well with Usha, and mom gradually starts to believe that something sinister and evil is afoot. Usha is convinced that Sandeep is the reincarnation of an abusive stalker that tried to kill her thirty years prior.

Evil Eye is based on an “Audible original” by playwright Madhuri Shekar, who adapts her own work here to great effect. It’s not too surprising that this was written by a playwright, as the script contains a lot of situations that screenwriting professors would tell students to avoid like the plague. A large portion of action and exposition here is delivered via telephone calls between Pallavi and her parents. One of the worst things most scripts can do is to include even a single lengthy telephone call to deliver key story points and actions. It’s not traditionally captivating in the slightest, and such moments almost always slows a film’s momentum to a full stop. First time feature directors Elan and Rajeev Dassani can’t find a way to make these frequent sequences visually appealing, but Evil Eye has confidence in its material and performers. Shekar’s ability to weave a convincing and well thought out narrative is impressive. Evil Eye and its stripped down approach to family drama and suspense tropes could work better on stage, but that doesn’t take away from the fact that it’s being told by a masterful storyteller in full control of their narrative.

Shekar’s work is packed with the sort of fascinating questions about the mental well being of its protagonists that fuel many ambitious thrillers. Should we believe mom, the daughter, superstitions, religious beliefs, folklore, or the stars? Is Usha motivated by untreated trauma or a genuine desire to keep up cultural appearances? If Sandeep really is the reincarnation of Usha’s attacker, is he even cognizant of it? These culturally specific conundrums are addressed in psychologically and spiritually fascinating ways. Shakar has clearly thought about these questions to a great degree, leading to a film where it’s almost impossible to have a bad or unsatisfactory ending. No matter the big reveal at the end, it would all make perfect sense whether Usha turns out to be right or wrong. Evil Eye addresses its existential leanings with careful thought and consideration, making it a film whose material is punching well above its weight class. 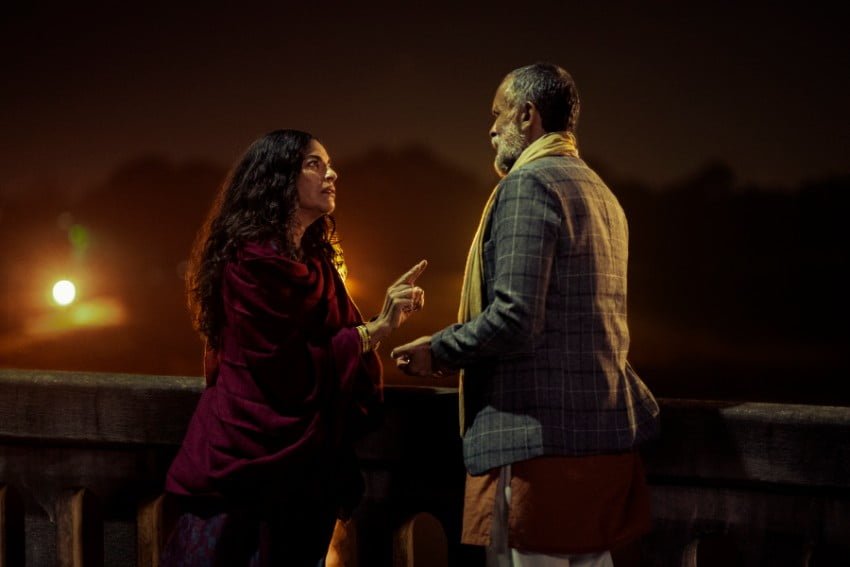 Mani and Choudhury both turn in impressionable performances, essentially driving the entire narrative despite almost never being in the same room together. It’s amazing that two actresses can make viewers buy into a fully realized mother-daughter relationship without sharing much screen time, but Mani and Choudhury are more than up to the task, with the latter digging deep to showcase the layers of her character and the material. Both leads have a pitch perfect understanding of everything going on in Shakar’s script and give the film’s themes a proper amount of respect and reverence. Instead of merely seeming like a well acted genre piece, there’s a passion to the core performances (including Bernard White, as Usha’s increasingly concerned husband) that speaks to something deeper: a desire to help tell a story that hasn’t been told before on a western platform.

The budget of Evil Eye (which was produced by genre titans Blumhouse and is now seeing release as part of their seasonally timed dumping of other various titles) is rock bottom, with the Dassani siblings struggling and failing mightily to inject some degree of visual panache into the material. A colour-coded split screen during one of the film’s many phone calls is ambitious as things get here. Then again, Evil Eye doesn’t need a huge budget to pull off what’s essentially a four person show that takes place predominantly in two locations. But despite the relative ease with which one could mount such a tale, Evil Eye isn’t particularly cinematic, nor is it even on par with most television. It’s bare minimum filmmaking that almost lets down the hard work of everyone involved. Evil Eye didn’t have to be grand, but it definitely has to be more than this.

Much like the very good Black Box and the borderline unwatchable The Lie from last week, the Blumhouse and Amazon marketing teams have positioned Evil Eye as a horror movie for Halloween viewing. Again, this isn’t a horror movie, but it is something that’s worth one’s time. Once one gets past the flimsy aesthetic choices and the story’s phone-call-heavy structure, Evil Eye is captivating in the same ways as most great thrillers. With a bit more time and money to work with, Evil Eye might’ve been an all time classic. Instead, it’s some great ideas and performances in an underwhelming package.