Over the Moon | Review 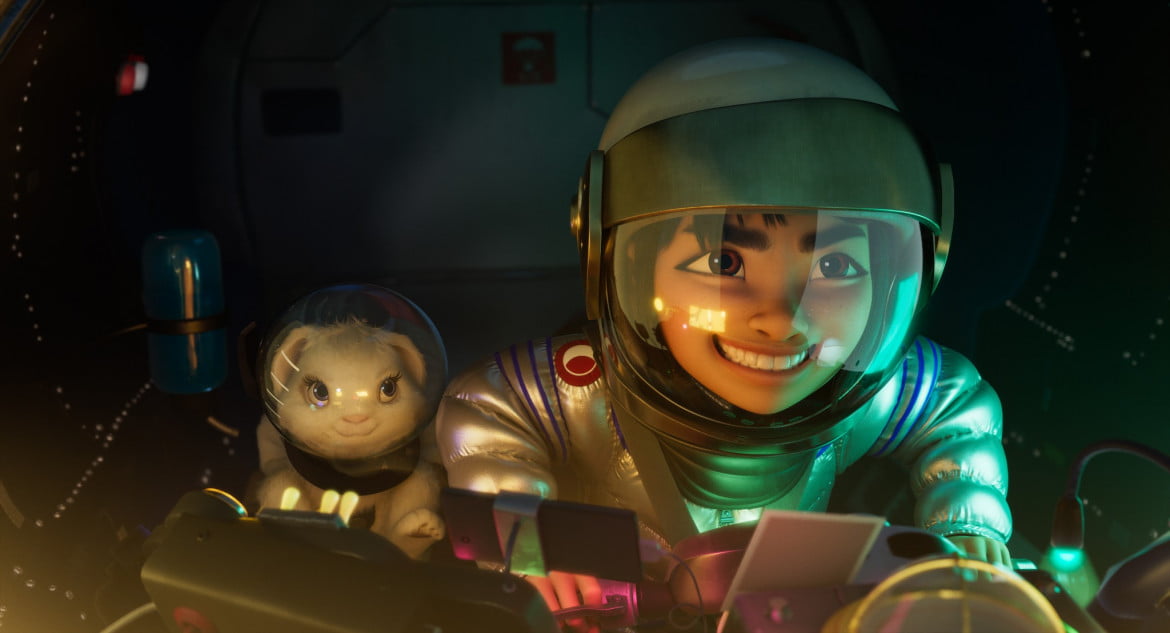 Although cliched and derivative, the animated romp Over the Moon still has plenty going for it. Colourful, energetic, kind-hearted, and packed with songs the film’s core demographic of kiddies will happily bop along to for months after watching, Over the Moon knows that it wants to be a broad, yet culturally specific crowd pleaser. While not much here is particularly inspired outside of its overall perspective and elaborate animation, Over the Moon still charms because there isn’t an ill fitting or misplaced bone in its body. While some might balk at watching something that’s not much more than a well oiled machine, this tale of family, interstellar travel, and Chinese mythology remains a solidly entertaining choice for kids and parents cooped up in their house.

Eight-year-old Fei Fei (voiced by Cathy Ang) is still reeling from the death of her mother four years prior. Her baker father (John Cho) has recently started dating again, and Fei Fei – like most children in such situations – thinks that her potential stepmother (Sandra Oh) and rambunctious younger stepbrother (Robert G. Chiu) are meant to take the place of mom. Fei Fei becomes obsessed with a legend mom once told to her in stories; about Chang’e (Phillipa Soo), a magical moon goddess who pines for her lost love. The science loving Fei Fei decides to build a rocket and travel to the moon, thinking that Chang’e might hold the key to bringing her mother back and making her family whole again.

Veteran Disney animator and Oscar winning short filmmaker Glen Keane (Dear Basketball) seems to be adhering to his former employer’s playbook for Over the Moon. Opening with a tragedy and then exploring the healing process by way of a whimsical adventure is one of the most tried and true plotlines for animated films across history. While Over the Moon doesn’t belong to the high end of that lengthy lineage, it certainly isn’t doing anything to embarrass itself. Even knowing everything that was going to happen during the rest of the film from the opening scenes, Over the Moon still managed to keep my interest by being visually dazzling and emotionally genuine. That’s all kids really need, and that’s precisely who Over the Moon is designed to entertain.

Over the Moon is the latest project from Chinese animation house Pearl Studio, who were responsible for last year’s equally gorgeous and narratively underwhelming Abominable (which has a very similar plot). Keane and co-director John Kahrs (who collaborated on the delightful short film Paperman a few years back) are tasked with making a great visual showcase for the still growing studio while ensuring that the story is as simplistic as possible. Veteran screenwriter Audrey Wells (who sadly passed away two years ago, with Over the Moon dedicated to her memory) provides Keane with a watertight narrative that won’t shock, confound, or confuse anyone over the age of eight. The emotional tolls of loss, acceptance, and guilt are all prevalent in the story, with life messages about moving on delivered with a minimum of condescension. It’s a basic storybook construction, but also without risk or any sense of daring. Even the film’s use of Chinese myths and legends feels like a safe bet instead of anything culturally significant.

If not for its good heart, a strong sense of young Asian/female representation, or the tremendous work being put in by the animators and songwriters, Over the Moon could easily have been written off as lazy. Sometimes the razor thin line between a mediocre, forgettable movie and a pretty decent timekiller is the overall amount of care and effort put into the project, and Over the Moon has been made with an abundance of both. It has the same pull that a well loved bedtime story possesses, and even if the kids watch it a billion times (and have seen this story across dozens of movies before), I can see them wanting to revisit Over the Moon with the same eagerness. For a child, this is pure comfort food, no matter how sad things get for our heroes. 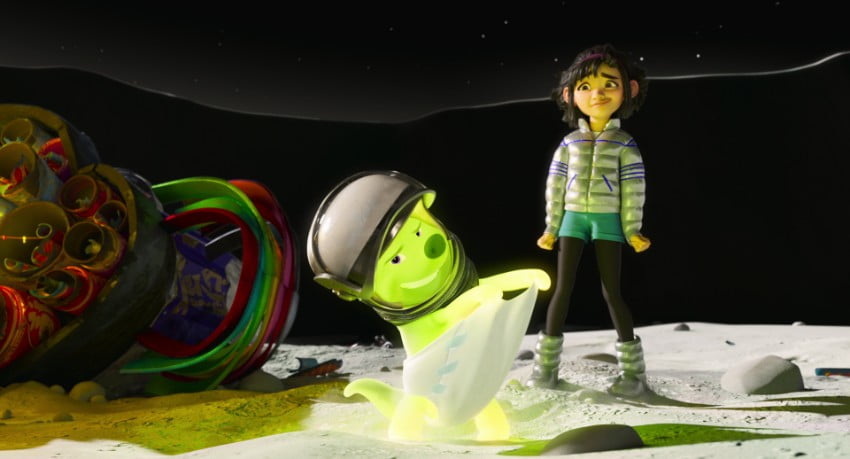 Over the Moon starts with an appropriately emotional set up, including a musical number about making traditional mooncakes for the mid-Autumn Festival that’s disarmingly well written and paced. There are some shenanigans involving the clashing personalities of Fei Fei and Chin, while their animal buddies look on (a rabbit and frog, respectively). When Over the Moon shifts into orbit, no one except the young and uninitiated will be surprised to find out that Chang’e isn’t the benevolent goddess Fei Fei expected her to be, but the songs keep coming with Keane and company pulling out all the visual stops. The world of the Lunarians is a vibrant, pastel heavy wonderland full of colourful orbs and manic energy, which is a perfect fit for the soundtrack’s desire to be chock full of catchy, fence-swinging Frozen-level belters (which parents should be prepared to hear ad nauseum until their kids grow out of them).

There’s a wild set piece where Chin plays Chang’e in a zero gravity ping pong match, and a wonderful chase sequence where Fei Fei and her new helper Gobi (an exiled, bumbling, soulful, neon green space dog, voiced by Ken Jeong) have to steal back the film’s magical MacGuffin from a band of biker chickens. There’s even a nicely dark moment towards the end involving a Neverending Story-esque “chamber of impenetrable sadness.” Moments like these help to not only keep up the energy level of Over the Moon, but they also go the extra mile to keep viewers of all ages somewhat invested in where things are headed. Even if the viewer knows this story isn’t going to show them anything new, they’ll probably stick around for the light show provided by the visuals.

The all Asian voice cast puts in an equally game effort, with everyone pulling their weight. Ang makes Fei Fei into a likable, driven young heroine. Cho provides a great deal of warmth. Soo plays her role as a morally conflicted and heartbroken deity with a surprising amount of subtlety and understatement. Jeong and Chiu provide the comedic relief, but also get a few well handled moments of drama peppered throughout for good measure. They all help to breathe some more life into the dogeared material.

The best thing that I can say about Over the Moon and why it manages to be successful overall is that it can trick the viewer into having an emotional reaction without seeming manipulative and corny. There are certainly some chuckles to be had and plenty of visual wonderment, but also a few times where I felt a few tears welling up in my eyes. I didn’t outright weep during Over the Moon, but it’s constructed in such a way that I didn’t realize my own investment in the predictable story. Those feelings were genuine and wholly earned. It’s far from an all time classic, but Over the Moon is so well made that it works just fine on its own modest terms.

Over the Moon is available to stream on Netflix starting Friday, October 23, 2020. 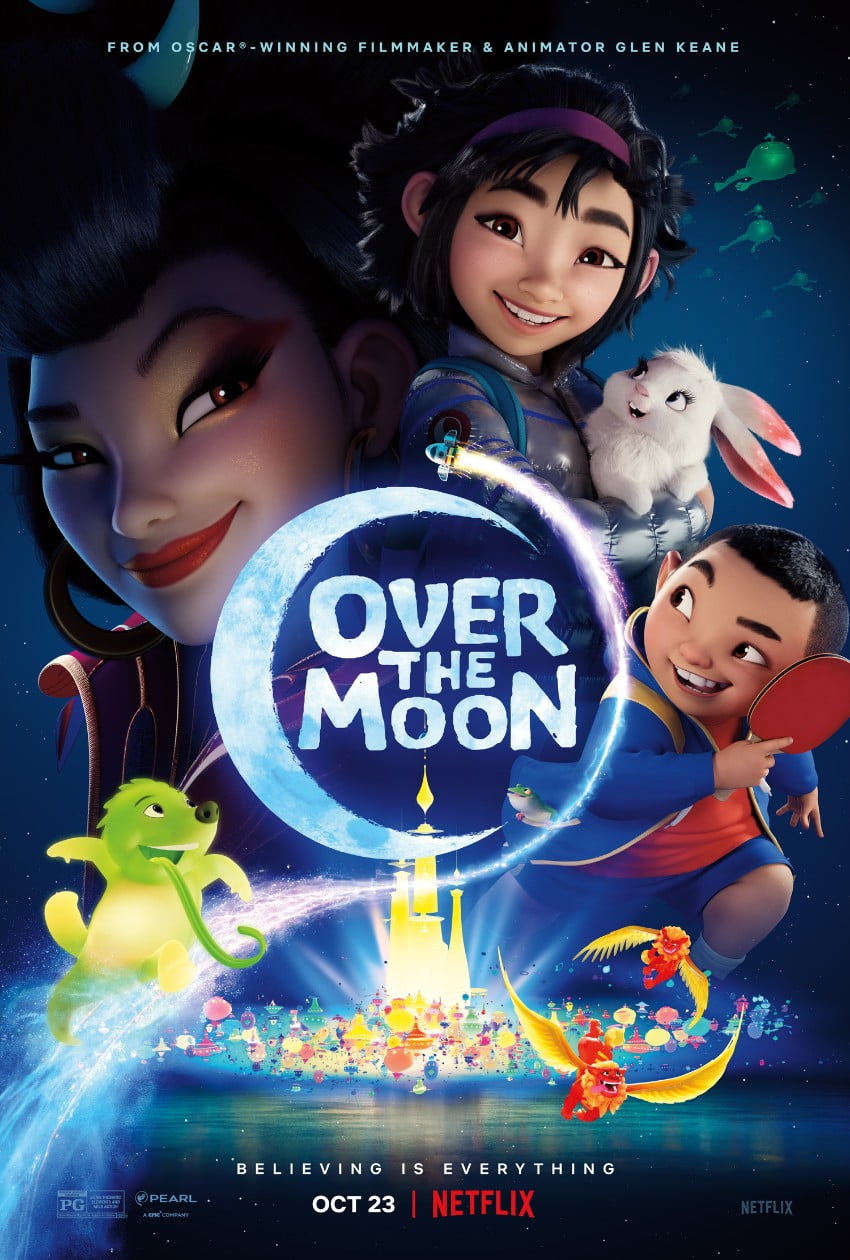