Milos Forman’s multiple Oscar winning Amadeus is not only one of the best films made about professional jealousy and classical music, it’s also – rather uniquely – a young person’s movie. Although it was released just as the MTV era was starting to take flight, and it’s set in 18th century Austria, Amadeus speaks volumes to a specific sort of youthful experience that’s truer today than ever before. Any budding artist or professional who has seen their work held down, overly edited, or somehow repressed by older colleagues can immediately relate to the plight of a younger Wolfgang Amadeus Mozart. In any line of work, professional sabotage remains a concern for some, and anyone who can remember moments in their lives where they were held back by the whims of others will immediately identify with the characters in Amadeus. It might be an old fashioned epic made nearly forty years ago about an era hundreds of years before its time, but in terms of perceptiveness, character, and relevance, Amadeus remains one of the most timeless films ever made.

Adapted for the screen by playwright Peter Shaffer from his own material, and produced by multiple award winner and former record producer Saul Zaentz (who, perhaps appropriately, built his entertainment empire with profits made from the band Creedence Clearwater Revival), Amadeus isn’t a historical drama in the strictest sense. By his own admission, Shaffer wanted Amadeus to be more dramatic than the actual truth of Mozart’s life and his fraught relationship to older fellow composer Antonio Salieri. The playful retelling of events both true and fictional weave a grand narrative of jealousy, revenge, and comeuppance.

Amadeus opens with Salieri (played by F. Murray Abraham as both younger and elderly versions of the character) confessing his sins of envy to a priest while convalescing in an asylum. Salieri relates his feelings of inadequacy when he hears the work of rising composer Mozart (played by Tom Hulce), and his steadfast desire to retain favour in the court of Emperor Joseph II. Although brash, arrogant, overly blunt, and sometimes uncouth, Mozart’s genius is unmistakable and evident, while Salieri’s chops never rise above “pretty good” in his finest works. In spite of Salieri’s numerous attempts to derail his career, Mozart continues to prolifically produce masterpieces that remain popular hundreds of years after his passing. Every chance he gets, Salieri poisons the ears of Mozart’s supporters and rivals, eventually driving the younger composer mad. Salieri uses spies, surveillance, lackeys, lies, and a lot of gaslighting to keep Mozart in his place. The results of these underhanded tactics don’t make Salieri better, they just make Mozart worse. Even on his worst days, Mozart – through the benefit of critical hindsight – was able to compose, conduct, and play circles around Salieri. 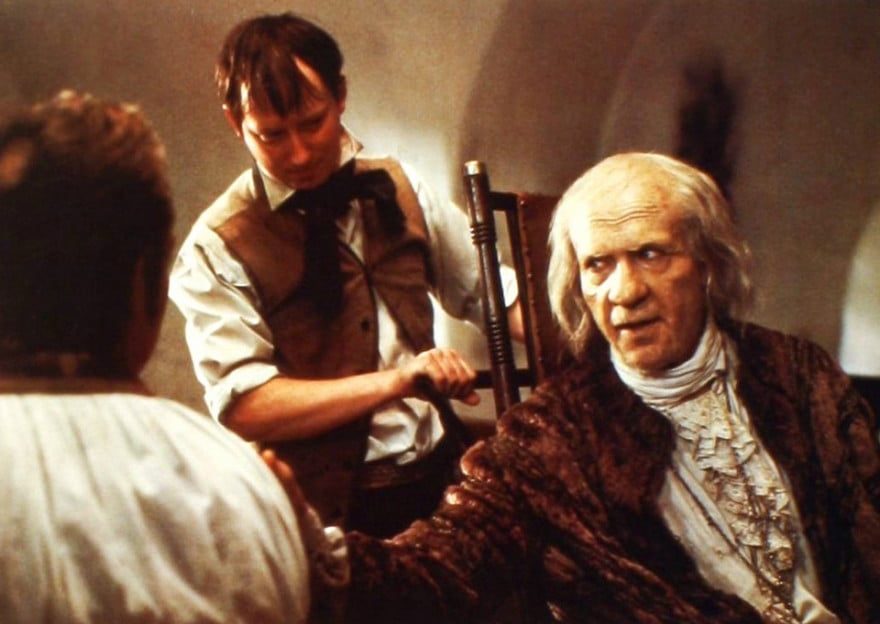 Outside of their shared issues with stern father figures (only with Mozart’s still alive for most of Amadeus), Salieri and Mozart have almost nothing in common. Salieri is a reclusive, pious bachelor who enjoys his life of comfort (although, in reality, the composer was a family man). Mozart, although happily married to a supportive wife (played by Elizabeth Berridge, whose contributions here are perpetually undervalued), was an unabashed hedonist. Salieri never speaks out of turn, while Mozart will freely offer up whatever’s on his mind whether asked for it or not. Salieri is a politician. Mozart is a genuine intellect. Although Salieri pretends to be Mozart’s friend, he’s actually the younger man’s puppet master.

In an modern era where young professionals struggle to hold onto employment opportunities while “tenured veterans” hang onto their jobs and benefits for dear life, the downfalls of both Mozart and Salieri feel as poignant and contemporary as they did upon the initial release of Amadeus in 1984. While many young people are more vocal today about a lack of opportunities and job security, the issues raised in Amadeus – although dramatically heightened – have persisted across dozens of generations. On a subconscious level, everyone knows (or in some cases is) Mozart, just like anyone can identify a Salieri in their lives. Forman and Shaffer were able to enhance this sense of familiarity by adopting a more contemporary use of language and bawdy humour to go along with their classically mounted epic. Hulce and Abraham implicitly understand the fears and struggles of their characters brilliantly. Both were nominated for Best Actor Oscars, with Abraham ultimately winning, but Hulce’s performance ironically stood the test of time better than that of his older counterpart. They’re both exceptional, but I’m willing to bet that Hollywood bigwigs in the early 1980s identified much more with Salieri than they did with Mozart.

Another huge reason for Amadeus’ endurance are the resplendent visuals; the kind one gets when no expenses are spared. The sets, costumes, wigs, make-up, and props are the stuff true epics are made of, and the actors feel right at home despite the story’s contemporary leanings. It’s also easy to get caught up in the film’s musical depictions, with dancing and opera interludes choreographed by the legendary Twyla Tharp, whose staging of Don Giovanni remains one of the best and most subtext packed scenes in cinematic history. These fine details are easier to luxuriate in when viewing Forman’s 2002 Director’s Cut, which is getting a re-release in select theatres this week and runs approximately twenty minutes longer than the original, Best Picture Oscar winning version from 1984. Amadeus remains three of the fastest and most entertaining hours I’ve ever spent watching a film.

Amadeus is one of the finest Oscar winners of all time, and a lot of that can be attributed to the enduring truthfulness of the story. It’s one of the few classic works of cinema where I know just as many people older and younger than me who claim it to be one of their all time favourite films. It’s an adult film made with youthful energy and ingenuity.

The Amadeus Director’s Cut will be re-released into select Cineplex locations across Canada on Friday, November 20, 2020. If seeing a film in cinemas, please take all necessary precautions. Wear a mask, practice social distancing, and stay home if feeling ill.