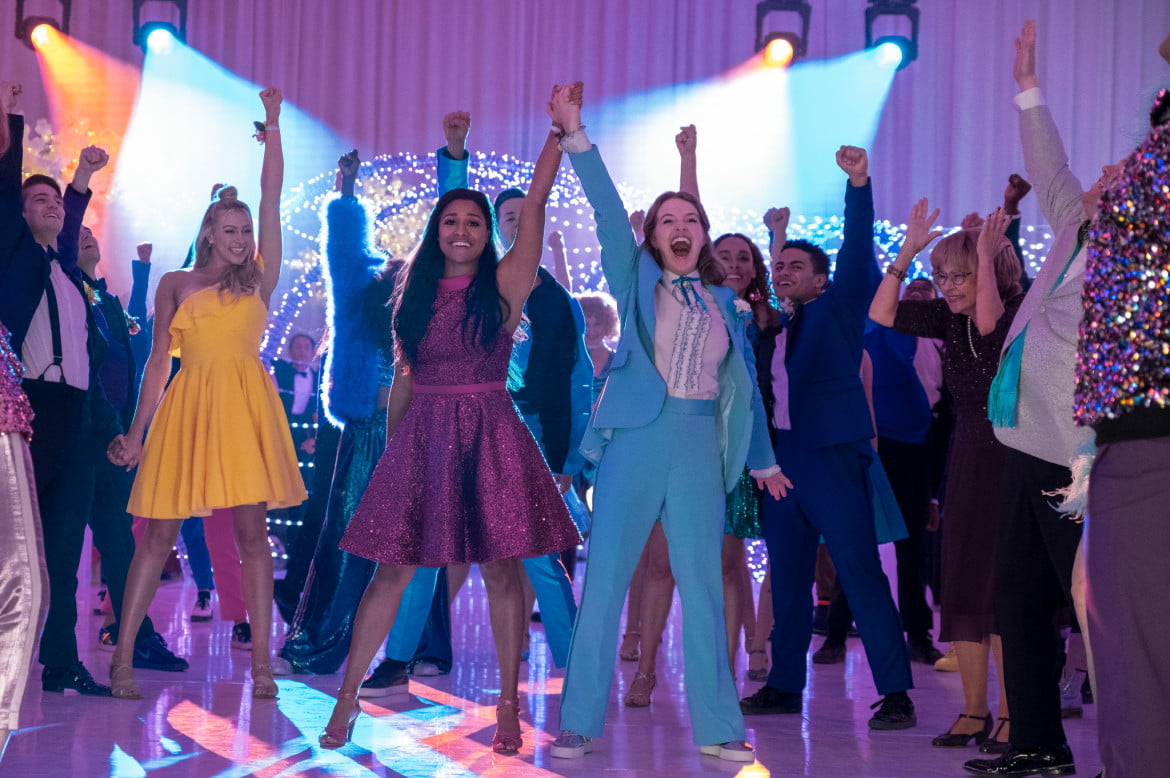 Ryan Murphy’s bright, colourful, and relentlessly chipper screen adaptation of the musical The Prom is exactly the sort of star driven production that the material is trying to lampoon. That problem has been a part of the fabric of the show to begin with, but when one brings out the likes of Meryl Streep, James Corden, and Nicole Kidman to overshadow a story about a young girl fighting against homophobia in middle America, Murphy’s version of The Prom forgets to be as self deprecating as the arrogant Broadway stereotype characters at the heart of it. By transporting this already overstuffed and overlong material from the stage to a wider canvas, the ultimate joke of The Prom is lost along with much of the humanity. Owing far too much to Murphy’s success with Glee, The Prom is the sort of project that will appeal mostly to younger theatre nerds with low expectations for their entertainment. The basic appeal of The Prom is evident, but it’s nothing more substantial than a sugar rush.

The PTA of James Madison High School in Edgewater, Indiana – led by the prudish, stern, and uppity Mrs. Greene (Kerry Washington) – has ruled that there will be no prom this year because one of their female students wants to bring their girlfriend to the event. While courts can rule that the school has to throw a party that’s inclusive to all genders and orientations, that doesn’t mean that the Mrs. Greenes of the world have to hold a prom that looks like it’s supporting “lifestyles” that aren’t accepted by the entire community. That young woman is Emma Nolan (Jo Ellen Pellman), a low key, kinda nerdy teen who’s upset that the whole school now hates her gayness, and the girlfriend in question is Alyssa (Ariana DeBose), the closeted daughter of the PTA president.

Meanwhile, hundreds of miles away in New York City, a quartet of supercilious, has-been Broadway performers are bemoaning their latest flops and strings of bad luck. Megastar Dee Dee Allen (Streep) can weather pretty much any number of storms on reputation alone, but she’s falling out of the limelight fast. Gay try-hard Barry Glickman (James Corden) is desperate to finally win the Tony that has eluded him for his entire career. Former 90s sitcom star turned Sardi’s bartender Trent Oliver (Andrew Rannells) likes to remind people at least once in every conversation that he went to Julliard. Angie Dickinson (Kidman) has always been the dutiful chorus girl, but never the star, losing plum roles to people who haven’t been working nearly as long or hard as her. When they hear about Emma’s plight in Indiana, they hit the road with a publicist (Kevin Chamberlin) in tow, with hopes they can generate some press for themselves by making their advocacy on behalf of a gay teen seem like a selfless act.

The Prom is at its absolute best whenever the struggles of Emma and Alyssa to be seen and accepted in a small, bigoted, religiously conservative town take centre stage, and its dragging worst during long stretches when Murphy is forced to focus on the “stars” coming to grips with their own selfishness. Emma and Alyssa are placed in opposition to sometimes frighteningly evil characters – especially Washington’s perfectionist, who seems to have been trucked in from a much more serious project – and the songs and moments shared between them and apart from other characters should be all this project needs. It would still be manipulative and a little corny, but its heart, mind, and soul would remain firmly in the right place and The Prom would be a lot less distracting. Again, it’s a problem with the material itself, but Murphy shows minimal regard for the main story and the utmost desire to wow the viewer with starpower and showstoppers, taking the most suspect aspects of the show and amplifying them all tenfold. One can almost hear Murphy screamings “IT GETS BETTER, GODDAMMIT” from behind the camera as the picture careens wildly towards a predetermined happy ending that’s too tidy for words. 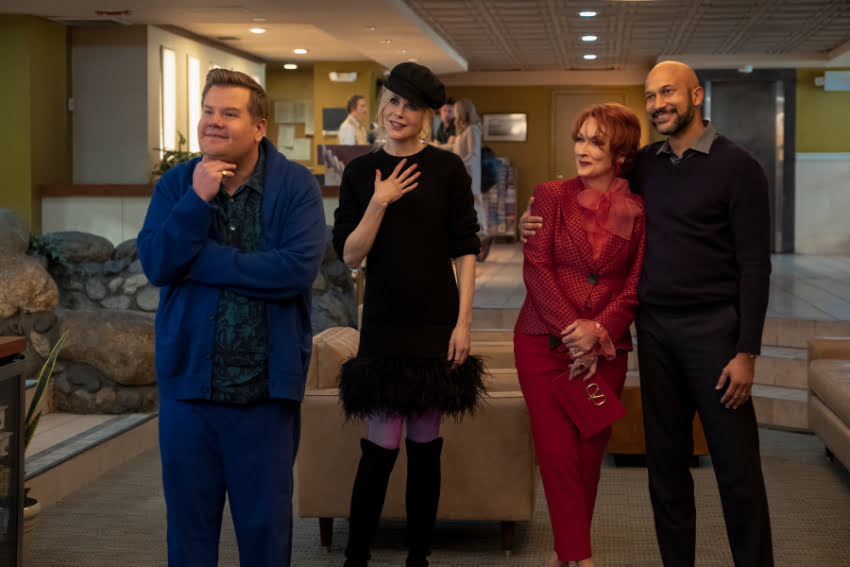 Every character in The Prom is supposed to go on their own journey, but the only ones that matter are those played delightfully and warmly by Pellman and DeBose. Streep and Corden bring plenty of energy to their roles (with the former playing an outright narcissist for the second time this week alone), but they’re also playing not much more than caricatures of classic Broadway stereotypes. Neither of them are particularly fun to be around, despite the strength of the performances. Corden fares marginally better, if only because part of his character identifies with Emma and her anxieties, but all Streep has to do (and she does it well, mind) is camp it up to the heavens, complain about her divorce, and always suggesting that she should be charging for all the good deeds she does. There’s a subplot where Dee Dee flirts with the school’s kind, supportive, and theatre loving principal (Keegan-Michael Key), but it mostly serves as another way to deliver Streep’s over-the-top performance.

Pellman and DeBose deliver star-making performances here, mostly because they’re the ones most worthy of audience investment. For their parts, Rannells and a shockingly underutilized Kidman fare much better. Of the four superstars, Rannells is the only one capable of making a punchline land outside of the songs, while Kidman is playing the closest thing the band of merrymakers has to a genuinely good person. But those two aren’t the focus of Murphy or the show in general. The Prom is the Meryl Streep and James Corden show, and everything else, no matter how engaging or funny, comes a distant second.

In terms of a visual aesthetic, The Prom can best be categorized as “unicorn vomit,” an unusually bright film built around genuinely dark and heartbreaking situations. Even when the film isn’t throwing out go for broke musical numbers (built around mostly mediocre songs), The Prom still commits to making itself look as cartoonish as possible. For a film about making a young, gay woman – and by extension some of its audience members – feel less alone in the world, The Prom is uniquely alienating with its visual and storytelling tones. The issue at the heart of The Prom is a real one, but Murphy treats this like it’s a full on, take-no-prisoners charm offensive, something that grows tiresome the worse Emma’s situation gets at school. Also, Murphy should issue apologies to anyone looking for pink, purple, or blue lighting gels and neon fluorescent tubes, because after The Prom I’m sure there aren’t any left in existence and the factory workers are exhausted.

In recent years, plenty of Broadway shows and musical movies have done fine jobs of balancing entertainment values with messages that speak to a show’s audience. The Prom tries to be one of those productions, but outside of agreeing with the celebrity characters who can only say “this is bad and this is wrong,” Murphy has no other frame of reference to go on here. It’s made by someone who seems to have been away from the issue at the heart of the film for far too long – much like the characters The Prom makes fun of – and is merely content to give the people what he thinks they want. I don’t think Murphy and his material are giving the people enough credit.

The Prom is available to stream on Netflix starting on Friday, December 11, 2020. 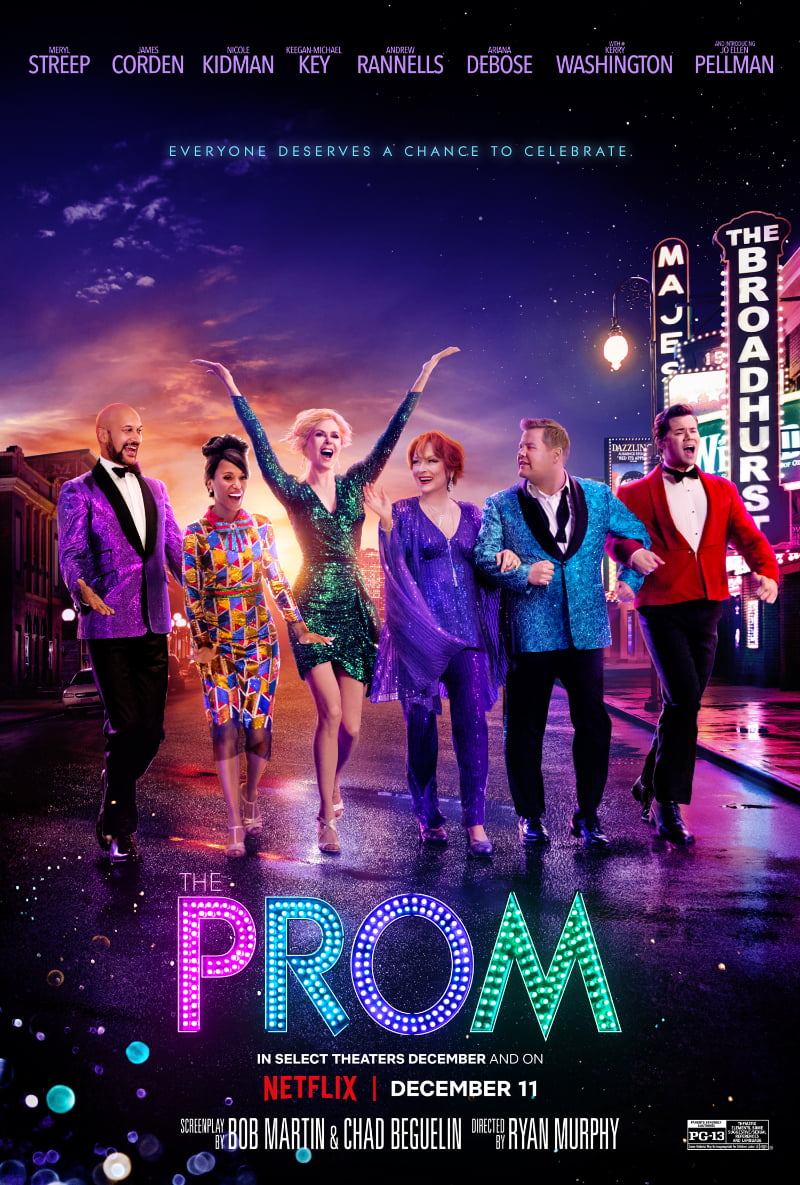