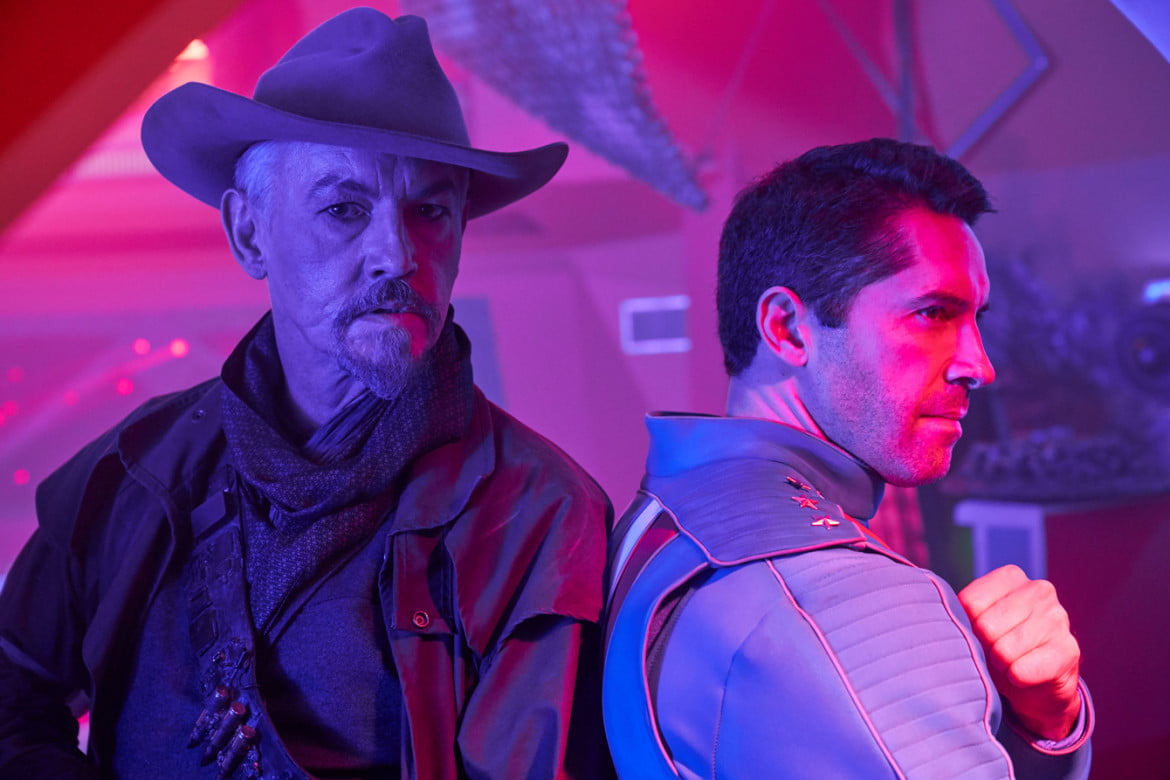 The fantasy-adventure yarn Max Cloud embraces old school gaming and B-movie standards to create a fun and familiar bit of entertainment. While one wonders how great Max Cloud could have been with a grander budget than the one it has been allotted, writer-director Martin Owen and co-writer/co-star Sally Collett deliver a lovingly silly look back at a time when video games were highly pixelated and people somewhat remembered old school sci-fi serials like Buck Rogers and Flash Gordon. It’s a movie that’s here for a good time, not a long time, and that’s just fine.

Set in 1990, Max Cloud is the story of Sarah Noble (Isabelle Allen), a teenage gamer living in Brooklyn with a stern father who seemingly hates fun. Her favourite video game is a side-scrolling beat-’em-up about an intergalactic explorer and soldier and his crew, who find themselves stuck on a desolate planet that’s home to the galaxy’s most notorious supermax prison. One afternoon, while dad’s away, Sarah uncovers a hidden room in the game, one that houses a mysterious “space witch.” Not long after discovering this “easter egg,” Sarah is magically transported into the game and into the body of her chosen character, Jake (Elliot James Langridge), the ship’s cook. Sarah’s only hope to escape the game and save the universe alongside Max (played by B-movie icon Scott Adkins) lies in the hands of her best friend, Cowboy (Franz Drameh), a skittish, anxiety ridden nerd who sucks at video games. Cowboy controls Jake/Sarah on the outside, while the girl learns her favourite gaming hero is kind of an idiot.

Owen and Collett’s goals with Max Cloud are genuine and earnest, even if one can easily spot all of their obvious influences: Last Action Hero, the campy 1980s Flash Gordon movie, The Last Starfighter, The Karate Kid, Vice Versa, Scott Pilgrim vs. The World, Masters of the Universe, Thunderbirds, Big Trouble in Little China, and, most obviously, the recent Jumanji films that have virtually the same plot. One imagines that if someone were to create a reboot of the heavily underrated and similarly themed Zathura, it would feel a lot like Max Cloud. So, on one hand, this isn’t the most original concept in the world, but Owen and Collett own up to everything early and often, preferring to give the audience a fun time without overanalyzing things too strenuously. It’s geared to a younger crowd who might not understand all of Owen and Collette’s witty references and in-jokes, but Max Cloud is the sort of film that’s so unabashedly entertaining that it could open doors to some genre classics. For adults, it’s a film that’s nostalgic in tone without being overly annoying about it.

Some of those doors that will open are to the work of Adkins, one of the hardest working people in action cinema today, alongside the likes of Jon Bernthal, Iko Uwais, and Frank Grillo on the current Mount Rushmore of ass kickers. Adkins is one of the big and small screen’s most talented and charismatic martial artists, and Max Cloud offers him a chance to show some more range and depth as an arrogant, ineffective, know-it-all goofball. Max is great at getting into large scale brawls, but he can’t understand that he doesn’t actually need to fight everyone and everything on his own. Max is all brawn and almost no brains, with Adkins embracing the character’s numerous shortcomings and annoyances (not to mention his one-piece spacesuit leotard) to perfect effect. It’s easy to see why the other “playable” characters fighting alongside Max in the game – which include a sassy female commander (played by Collett) and an intergalactic bounty hunter (Tommy Flanagan) – can’t stand to be around the guy. It doesn’t matter how well someone plays the game, because Max’s half-cocked approach to everything will likely get them all killed. But there’s also a great humanity that Owen and Collett give the character of Max, with a flashback to his childhood offering a genuinely sweet and moving moment in an otherwise goofy movie, one that’s warmly handled by Adkins. 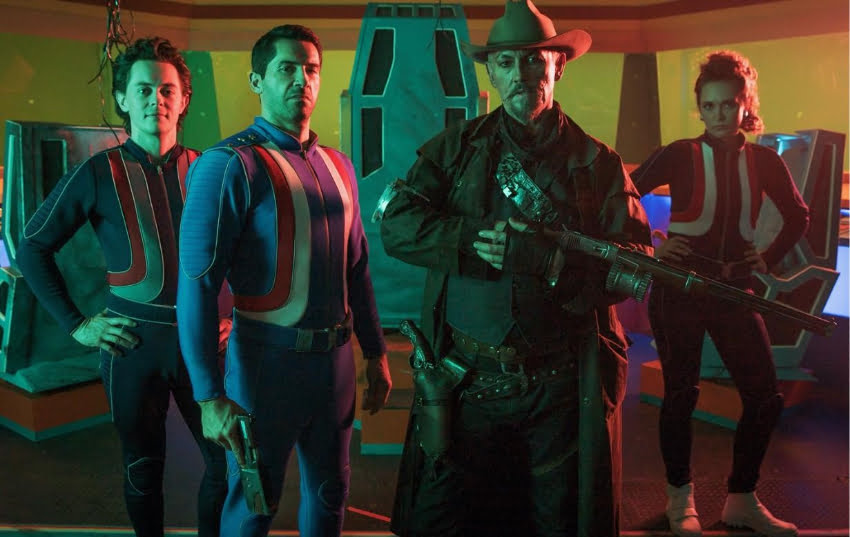 The cast members all settle into their purposefully narrow archetypes wonderfully, making the most of their opportunities to play in Owen’s silly sandbox. Collett shines as the perpetually annoyed first-mate. John Hannah broods and bemoans as board game enthusiast and Max Cloud’s archnemesis, Revengor. Drameh nicely plays the neurotic best friend without ever becoming annoying or unlikable. And while she’s underutilized, Captain Marvel stand-out Lashana Lynch vamps it up Revengor’s closest (and more powerful) ally. It’s a film that looks like it could be fun to make, and everyone has come to join in playtime.

But quite often, the ambition of Max Cloud outstrips its means. Max Cloud is a cheap looking movie, both by design and circumstance. Sometimes, Owen is able to paper over his limitations nicely, offering up a colourful, three dimensional look at what a pixelated, two dimensional world could actually look like on screen. The backgrounds are minimalist and repetitive, but that’s how games were designed back in the 16-bit era. The walls are adorned with posters for the game people are already playing at home and pointless warning and motivational signs, two things 90s console masters will remember fondly. Whenever someone dies, they burst into a bunch of blurry, vanishing pixels. Characters can’t simply press a button to open a door, instead having to punch or kick things to progress. Walls are filled with holes that characters can’t walk through because they’re just part of the background. These fine details allow viewers to easily buy into all this silliness.

But those fine details that will charm movie and video game buffs alike are sometimes lost by the inconsistency of the action sequences themselves. At times, Max Cloud appears like a standard fighting game, while at others, it’s a platformer with clearly defined objectives. There’s a pivotal moment where Jake/Sarah and her new friends are forced to fight what appears to be a giant sumo monster, and while it seems like something fun and outlandish is about to happen, the scene plays out entirely from the perspective of Cowboy at home, which seems like a budgetary cop-out. There are lots of whimsical ideas in Max Cloud, but the film is too small to showcase all of them.

While some will understandably (and not altogether incorrectly) dismiss Max Cloud as a straight-to-video Jumanji clone, I actually got more enjoyment out of this film’s brevity and sense of energy. Owen throws plenty at his Pepto-Bismol pink walls, and almost all of it sticks. The world is a pretty rough place at the moment, but Max Cloud was charming enough to make me forget all about that for 88 minutes. Sometimes, and especially these days, that’s all you need.

Max Cloud is now available on VOD in Canada. 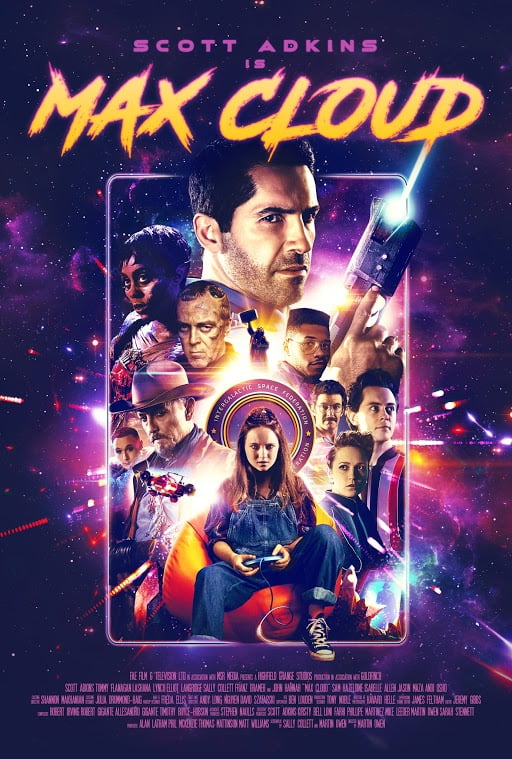