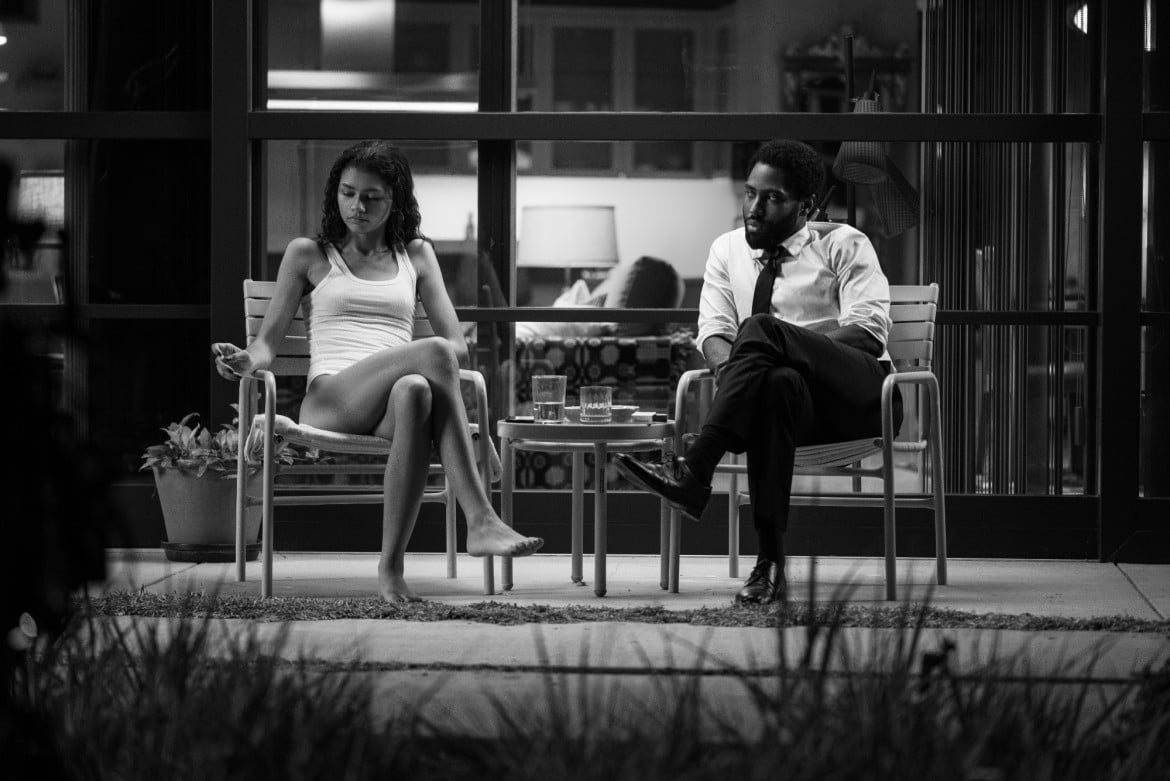 I honestly can’t tell if I appreciate writer-director Sam Levinson’s Malcolm & Marie or I hate it with every fibre of my being. Even more honestly, I’m in no rush to revisit something this purposefully shrill, abrasive, and combative to find out. A metatextual film about a Hollywood couple possibly falling apart for good following a big movie premiere, Malcolm & Marie has a pointed blend of toxic confidence and bottomless self-loathing that showcases a keen degree of self-awareness. Malcolm & Marie feels truthful to the terrible and awkward situation it depicts – bolstered by two leads who hold nothing back in their performances – but Levinson’s latest is so pummelling, self-flagellating, and stand-offish that it’s like running afoul of a drunk who wants to hug you one minute before the most minor of slip ups causes them to grab a bat from their trunk and go to work on your skull. That seems to be Levinson’s entire point with Malcom & Marie, but whether or not that makes for a great film lies squarely in the eyes of the beholder.

Malcolm (John David Washington) is a director returning home and riding high on a wave of apparent good will following the premiere of his latest feature, a story of a young black woman battling drug addiction. Malcolm – in a well executed, lengthy, but subtle shot – paces his kitchen, full of energy, psychoanalyzing the crowd’s reaction and nervously awaiting the first reviews, just so he can tear them to shreds. Less enthusiastic is Malcolm’s model girlfriend, Marie (Zendaya), who takes in everything he’s saying, even though she cares about precious little of it. Marie constantly has the look of someone who has heard all of Malcolm’s rhetoric before, and she’s basically biding her time until his rage and ego tire him out for the night. But on this occasion, a bigger dispute is brewing; one that will show a degree of resentment between the two. Marie is upset that Malcolm never mentioned in his pre or post-screening speeches that his latest film was clearly and unambiguously inspired by her own struggles with addiction and other mental health issues.

Levinson takes the defensive position from the outset of Malcolm & Marie, expecting critics to come at this film with knives out, so he sits with a whole armory at the ready.  It becomes impossible to separate the artist from the art in Malcolm & Marie. Although Malcolm is talking about a very different film, it’s patently obvious that Levinson is airing some grievances about the divided critical reception to his previous film, Assassination Nation, (which, for the record, is fucking horrible in every way) and his controversial television series, Euphoria (which started awful, but has found clearer footing over time). Malcolm goes off like a battle rapper keen to take down everyone in sight. (Shout out to the Los Angeles Times!) Even when a review comes in that’s positive about Malcolm’s latest, Levinson’s on screen avatar tears the piece to shreds because the “white lady” who wrote it talked about the film’s social relevancy instead of heralding the film as something commercially viable. Neither Assassination Nation, nor Malcolm & Marie are a particularly good look for a white, male, and clearly privileged filmmaker like Levinson. Whereas his first provocative feature feebly tried to explain rampant violence against women, this one finds him trying struggling to describe the struggles of being a black filmmaker.

At every turn, Malcolm & Marie is daring critics and viewers to take his bait, but the film’s undercurrents are so niche that the only people who will get anything out of watching this are industry insiders and critics. It’s the worst sort of posturing and grandstanding, but I can’t say that these people don’t exist in the world, and, if nothing else, they are accurately represented in Malcolm & Marie. These are needy, self-destructive people who are willing to sabotage their own morals and identities just for the sake of winning an argument. They are also artists who have the right to defend their art. Although the arguments at hand are wonky and pissy ones, I respect them to a great degree. Critics should never say something in print, online, or on television that they wouldn’t say to someone’s face, and filmmakers and performers standing up for their work shouldn’t be met with scorn for trying to have an vision of their own. (And to Levinson’s credit, I don’t think he’s only talking about himself through these characters. Several other filmmakers have also been a clear influence on the character of Malcolm.) 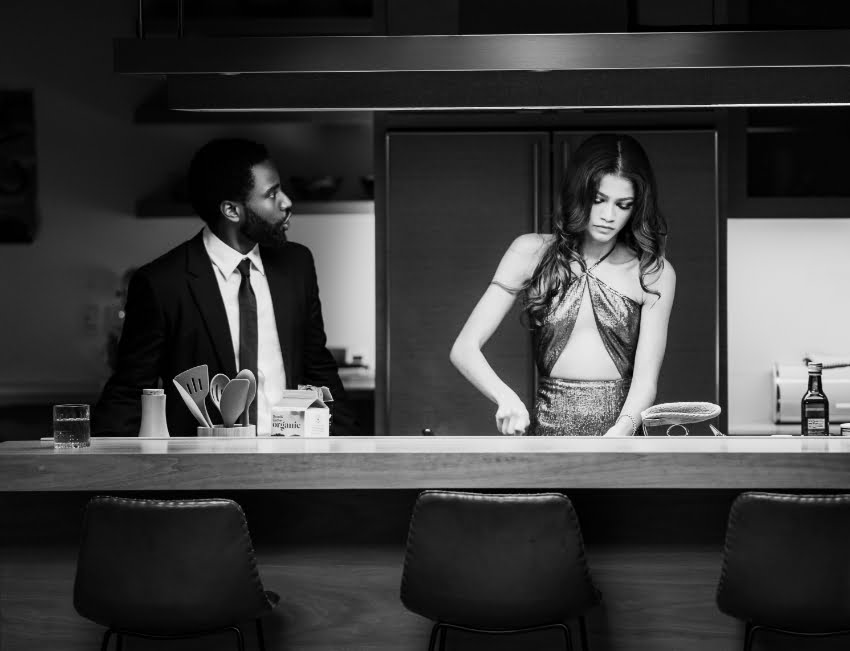 Malcolm & Marie was filmed largely in secret during the pandemic, and it has the feeling of a project that came together quickly. The grainy, black and white visuals invite comparisons to other filmmakers, but add little else on a thematic level. Levinson’s script seems to have been written in a stream-of-consciousness manner, which means it’s purposefully sloppy. It’s a perfect fit for characters who can’t stop themselves from spewing out everything that’s on their mind in lengthy, breathless detail, even if what they’re saying is likely to be tuned out by most viewers. It’s also perfect for a film that’s resolutely driven by its performances, and Washington and Zendaya give Levinson’s material the juice to make everything sing. The film is dubious in many respects, but Washington and Zendaya turn in two of the year’s best performances.

Washington’s unrestrained work is compelling because the actor has weaponized the character’s charm and intelligence. Here’s a man who wants to be loved so badly it’s pathetic, but he also demands that love be on his terms and not unconditional. He has tunnel vision when it comes to his professional success, and he refuses to acknowledge the efforts of others to help facilitate his rise. He’s more than willing to humiliate anyone he sees as a threat, and Washington imbues Malcolm with frighteningly predatory and realistic undercurrents of menace that mask deep insecurities.

Zendaya is even better as Malcolm’s better half, a woman who lets her partner endlessly foam at the mouth with the ultimate “are you fucking done yet” expression on her face. From watching Zendaya closely, one can see the character formulating her counterargument to Malcolm’s bluster in her mind. Malcolm’s rage and disdain are like a wildfire, but while Marie is often quieter in her response, the impact is like a cluster bomb. Malcolm acts on pure instinct and education. Marie thinks and considers. Marie’s beef doesn’t entirely stem from not getting cast in the lead of Malcolm’s film, or from a lack of a tangible on screen credit, but rather from a total ignoring of the emotional credit that she deserves for the inspiration. Zendaya single-handedly grounds Malcolm & Marie, bringing some much needed empathy and compassion to an otherwise wildly untethered project. This ability to imbue humanity into the film is best noticed in one of the film’s few tender moments, where Marie – following one harrowing shouting match, and not long before they head into another – helps her lover unpack his feelings in a constructive way.

The interplay between Washington and Zendaya is far and away the best thing about Malcolm & Marie. They understand the film, the setting, and the characters within them perfectly, and Levinson is at his absolute best when deconstructing the interplay between personal relationships and art. But any attempts to analyze Malcolm & Marie beyond it’s pronounced middle finger to the world is likely to be met with scorn by the person who made it, so why even try? Neither Malcolm, nor Marie will “win” their arguments, and neither will anyone trying to make sense of Levinson’s film positively or negatively. It’s from the “I know you are, but what am I” and “fuck you for trying” schools of arguing; a film that wants to present itself as a daring, adult project, but has a childish soul. Again, when talking about Hollywood, such archetypes are wholly believable, but at one point in his rantings, Malcolm screams that he hates when people call a film realistic or authentic, so what’s the point in even complimenting this? To quote a song from my younger days that feels appropriate within the context of Malcolm & Marie, “Those words, at best, were worse than teenage poetry.”

Malcolm & Marie is available to stream on Netflix on Friday, February 5, 2021. 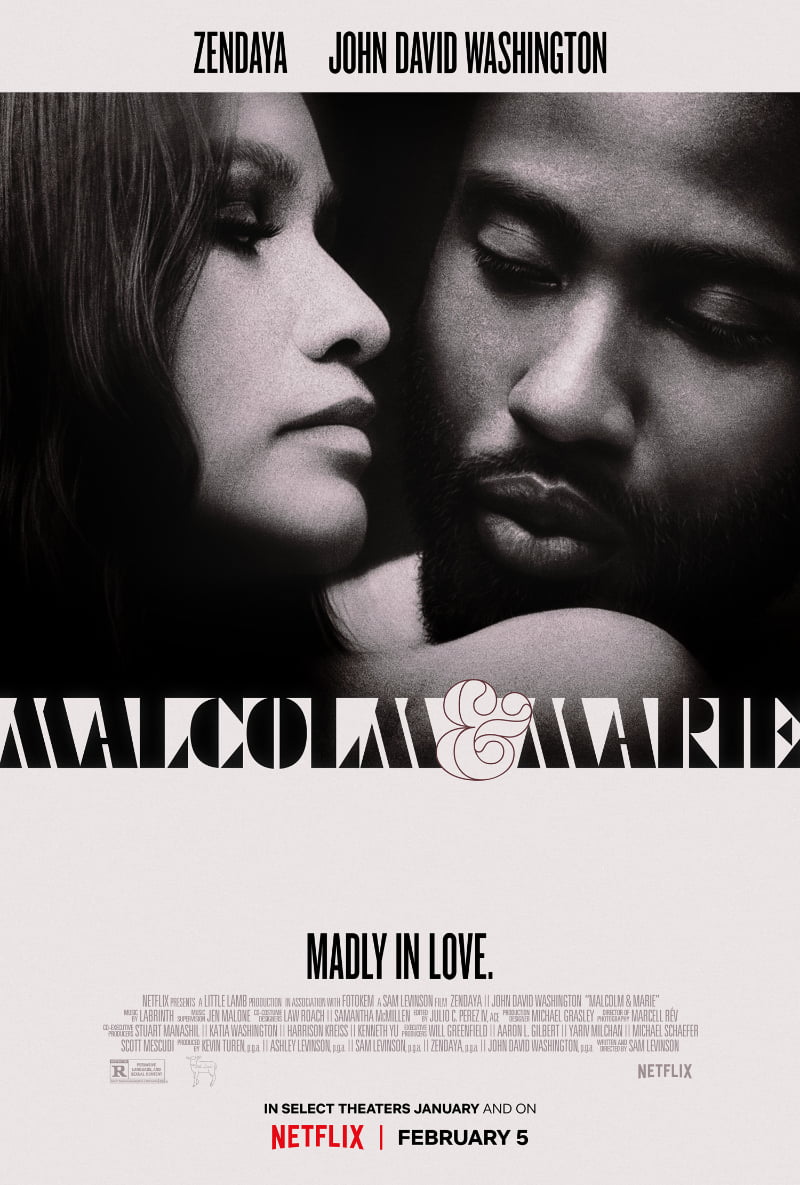