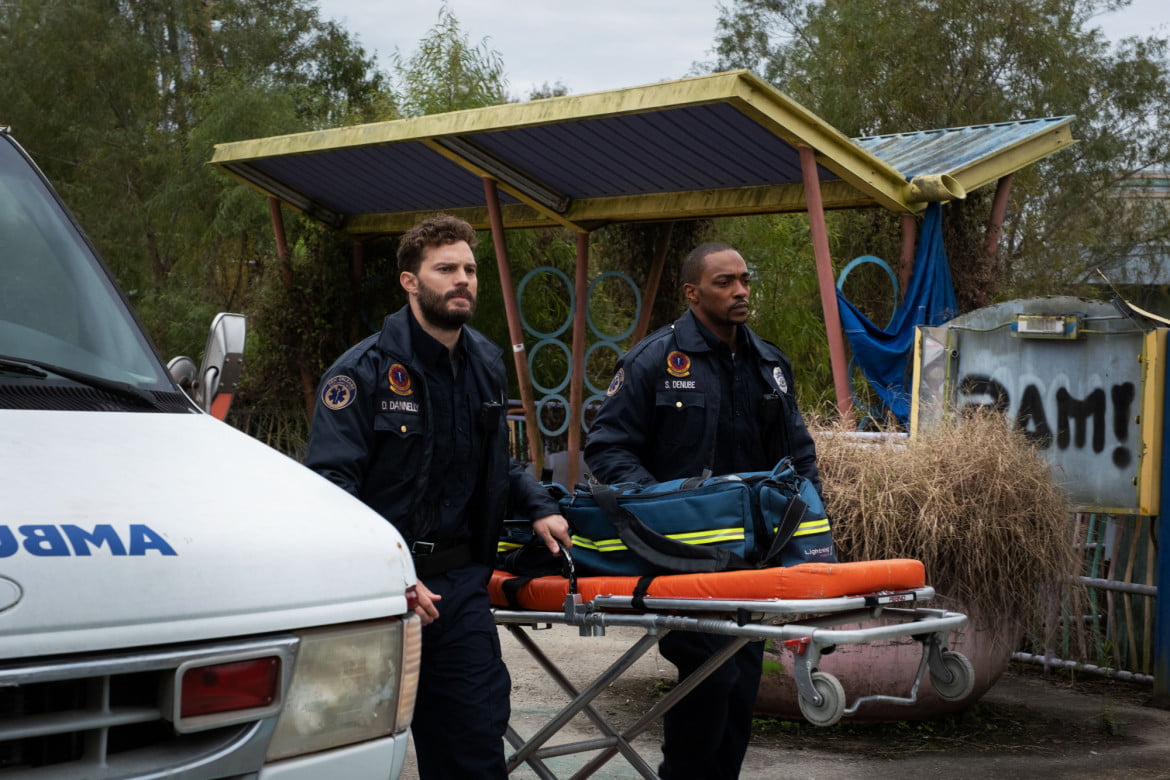 An intelligent, but uneven sci-fi thriller that never settles on a proper tone, Synchronic mostly flounders, but still has some flashes of genuine ingenuity and entertainment value. The latest film from genre maverick directors Justin Benson and Aaron Moorhead (with the former providing the screenplay here), Synchronic is a time travel riff that bounces around uneasily between surrealism, serious drama, and silliness. There are some bits throughout Synchronic that work rather well, but they only serve to raise more questions about the film’s all-over-the-map direction. The attempt to make a different sort of time and reality blurring narrative is admirable, but Synchronic never gels into something truly satisfying.

Steve (Anthony Mackie) and Dennis (Jamie Dornan) are veteran New Orleans paramedics who’ve seen a marked increase in bizarre drug overdoses and violent crime scenes. These unusual events – which includes addicts getting into sword fights and an apparent spontaneous combustion in the parking lot of an old amusement park – are tied to a barely legal synthetic drug known as Synchronic. When a user takes Synchronic, they are transported to the past for several minutes. Sometimes they’re able to take things back with them. Sometimes they come back severely injured. Sometimes they don’t come back at all. The Synchronic epidemic hits home for the paramedics when Dennis’ 18-year-old daughter, Brianna (Ally Ioannides) takes the drug and suddenly disappears. Steve – who has been diagnosed with an inoperable brain tumour that will eventually kill him – decides to start experimenting with Synchronic in a bid to rescue Brianna from the past.

Technically, Synchronic isn’t a time travel story in the strictest sense. Benson and Moorhead instead build their story on the theory that every moment in time exists concurrently on different planes, a detail that makes the timey-wimey-ness of Synchronic a little easier to buy into. But while the time travel dynamics involved here are well defined and explained – better, in fact, than most films using such plot devices – it’s the rest of the film that feels curiously underdeveloped and rushed. The weirdness adds up, but what never does is the humanity at the heart of the story, which is a shame considering that Benson and Moorhead’s three previous features (Resolution, Spring, and The Endless) are emotionally fruitful affairs.

Synchronic gives Benson and Moorhead their biggest canvas yet, but the decisions on how to employ their resources are sometimes confounding. Whenever a Synchronic user starts travelling, the visual representation of one location gradually morphing into that same place at a different moment in time is stunning. But once those transitions back and forth are finished, the style of Synchronic is drab and static. There’s little visual wonderment or flair outside of the effects driven transitions, which contributes in no small way to Synchronic turning monotonous in its lowest moments. 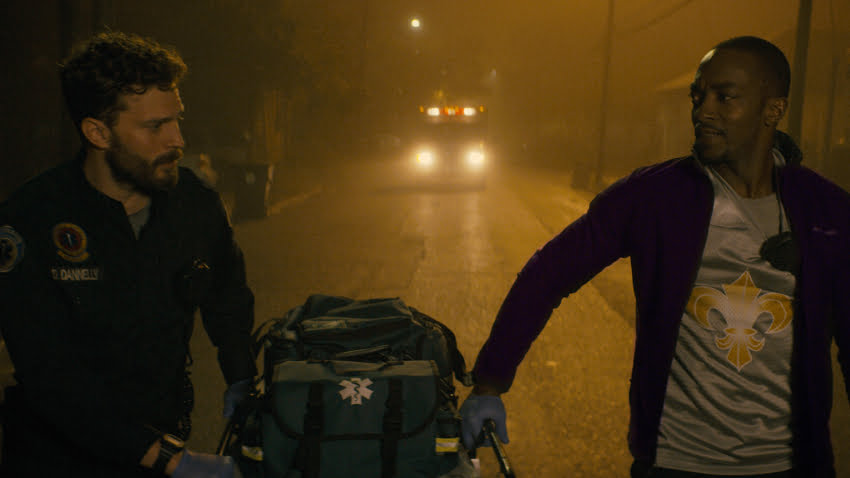 A further misstep that’s apparent earlier on is the obvious miscasting of Mackie and Dornan, who are playing characters that feel like they were written for much older, credibly retirement age performers. The same can be said for Ioannides’ teenager, who looks more like a teen, but never seems a day over twenty-five in terms of the writing. It’s a stretch to believe that Mackie’s lifelong bachelor and Dornan’s devoted family man look like people who are barely in their forties. Their conversations about their changing lives and fears sound like they’ve been written for much more seasoned faces and personalities. It’s harder to buy these two obvious movie stars as burnt out workaday grunts, although one of them fares far, far better with their casting limitations.

Mackie is wonderful, and when Synchronic starts to revolve almost exclusively around his character’s increasing physical pain and their search for a way to get Brianna back, Benson and Moorhead’s film is at its most entertaining. Mackie still doesn’t seem grizzled or jaded, but Steve does come across as determined and appropriately troubled. Starting during a lengthy sequence just around the halfway point when Steve starts filming his experiments with Synchronic for future viewers in case of his death or disappearance, the film becomes easy to watch and engage with. But while Mackie is great and those scenes (which arguably go on much longer than they need to) are fun, they further expose a big problem with Synchronic: a lack of overall suspense. No matter what happens in these scenes, the viewer knows from already established facts that the film can’t end at any of these points. By the third and fourth missions to the past (which include attacks in a swamp and a run-ins with Klansmen), Synchronic begins to appear like a story that’s stalling for time while trying to explain its own plot. It uses action and suspense to explain the core dynamics, but the viewer knows the story won’t end at one of these moments. It’s better than explaining things verbally, but these sequences aren’t much more than empty entertainment in an already curiously lopsided movie.

Dornan, on the other hand, is bad and has been given far less to do other than sulk and brood. Dornan is a hit or miss talent, and Synchronic finds him out of his element. When Dornan is good (A Private War, Barb and Star Go to Vista Del Mar), he’s great. When he’s off his game (the Fifty Shades films, the most recent big screen Robin Hood), he looks like someone who’d rather be anywhere else. Synchronic finds Dornan closer to the latter setting of his talents, playing Dennis as someone so devoid of personality one could be forgiven for thinking he was a sleepwalker. It’s one thing to play a character being beaten down by life as exhausted, but it’s another thing to make the viewer tired just by watching them. Whenever Synchronic focuses on Mackie, the film comes to life. Whenever the focus shifts to Dornan, it turns into a cold shower. It should also come as little shock that these actors – who are supposed to be playing decades long friends – have almost no chemistry opposite one another.

Synchronic builds to an adequate conclusion that sends things out on an acceptable enough note, but there’s something disappointing about Benson and Moorhead never building to something greater or more ambitious. By the conclusion, Benson and Moorhead have laid things out so preciously that the viewer knows almost beat for beat how this thing is going to end. While their previous projects have balanced humour, darkness, and ambition really well, Synchronic feels like a shrug. While it’s perfectly fine to take a fantastically minded story and try to tell it in the most stripped down fashion possible, Benson and Moorhead’s film is constantly in danger of growing tedious and hard to sit through. There’s thoughtfulness throughout Synchronic, but it’s a very hard film to fully engage with, even after I’ve had multiple viewings since it premiered at TIFF in 2019. At some points, it’s trying too hard. At others, Synchronic isn’t trying nearly hard enough.

Synchronic is now available in Canada on VOD. 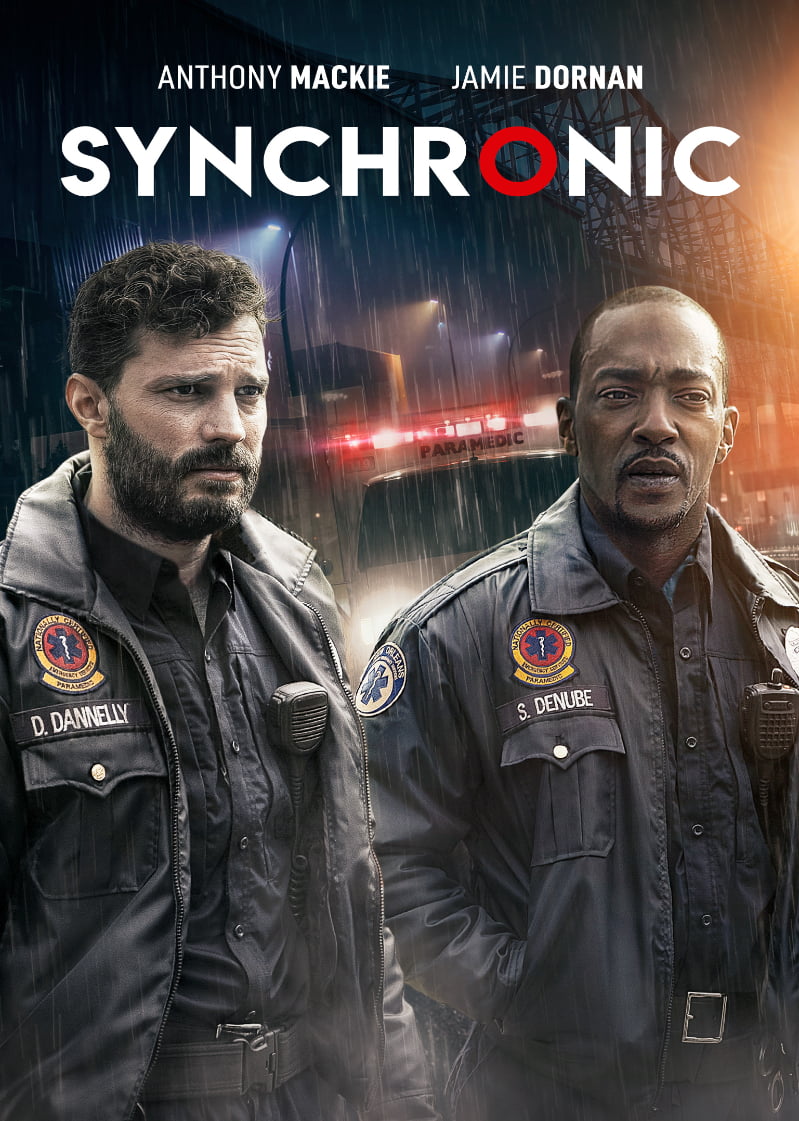