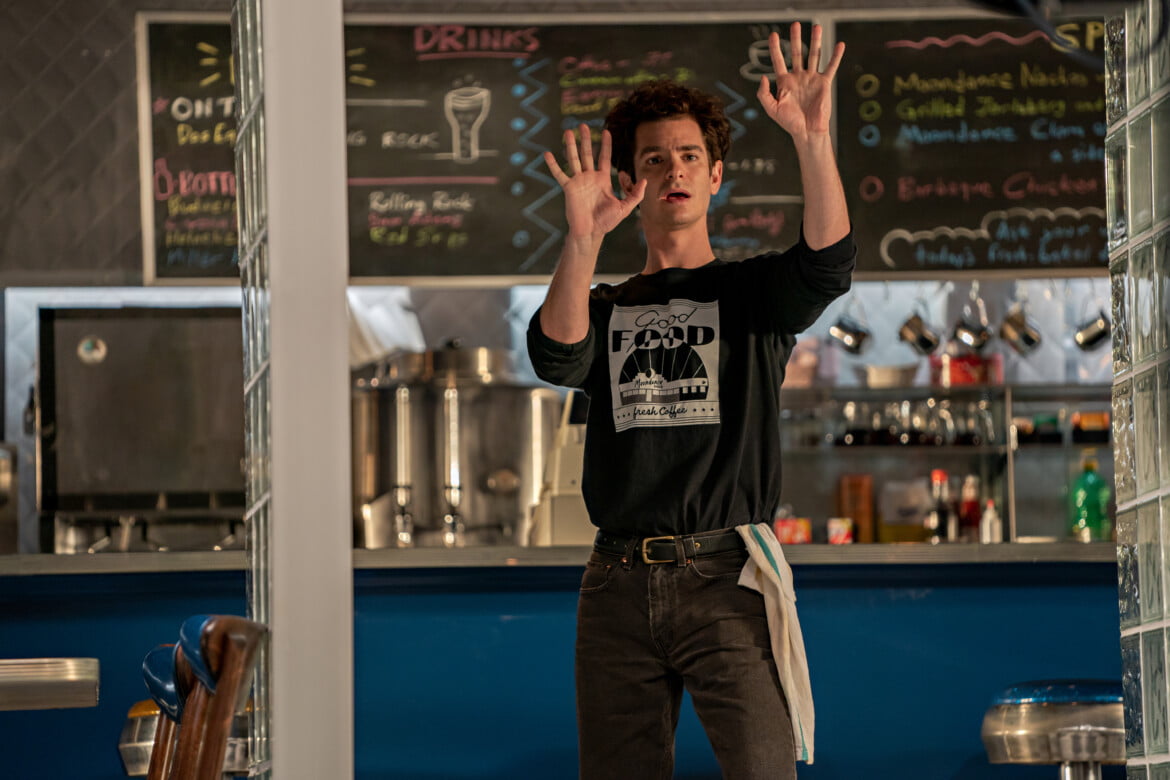 Lin-Manuel Miranda’s directorial debut is a showstopper, and it’s going to capture a lot of awards attention, especially for its star, the great Andrew Garfield.

Garfield stars as Jon in this semi-autobiographical film about Rent creator Jonathan Larson, the wildly talented composer and playwright, who wrote the musical and performed it off-off-Broadway in the 1990s. That was just six years before he died, and he never lived to even see Rent have it’s big premiere.

That gives the film a strange, tragic mood, and yet Miranda and this incredible cast also make the story electric. It’s inspiring and thoughtful; moving and driven.

The power of the film is that–while it’s based around a stage musical, and features a lot of musical numbers–Tick, Tick… Boom! never feels like we’re trapped watching a stage musical. The film is fluid and captures Jon’s life in a way that feels real, even as it’s tempered through the lens of Broadway.

Miranda deftly gives the musical numbers a sense of power, with an impressive scale that feels larger than life, and the cinematography by Alice Brooks is lively, and beautifully captures the tension, drama, and even the whimsy of the story.

At the heart of the story, it’s about a creator finding his vision and becoming a true storyteller, which is a familiar concept. The passion of the film saves some story elements that could have been a bit more original.

And Garfield is phenomenal in this role. This is his best role to date, and he is amazing, from the low points in the story, all the way to the epic highs, the performances, and owning every stage that Jon steps foot on.

Alexandra Shipp stars as Susan, Jon’s patient-to-a-point girlfriend who is both a catalyst for him, and a serious hangup. She’s fantastic, and they have excellent chemistry. As does Robin De Jesus as Michael, Jon’s best friend. De Jesus is heartbreakingly wonderful in every scene, and I love the relationship the two actors build together.

Vanessa Hudgens also co-stars in the film as Karessa Johnson, however she wasn’t given a very large part, aside from singing, but she’s amazing in all the musical numbers.

The film is unabashedly tragic, and it often leans into that theme, but it’s also joyous, funny, sweet, and so full of life. Tick, Tick… Boom! celebrates life, it lifts Larson’s story up, and it points to one of Broadways great creators who never really got his due while he was alive.

On the surface, it’s sometimes a standard biopic, but with the incredible music, Garfield’s powerful performance, and a story that says “dream bigger,” I have a hard time finding fault with Tick, Tick… Boom!