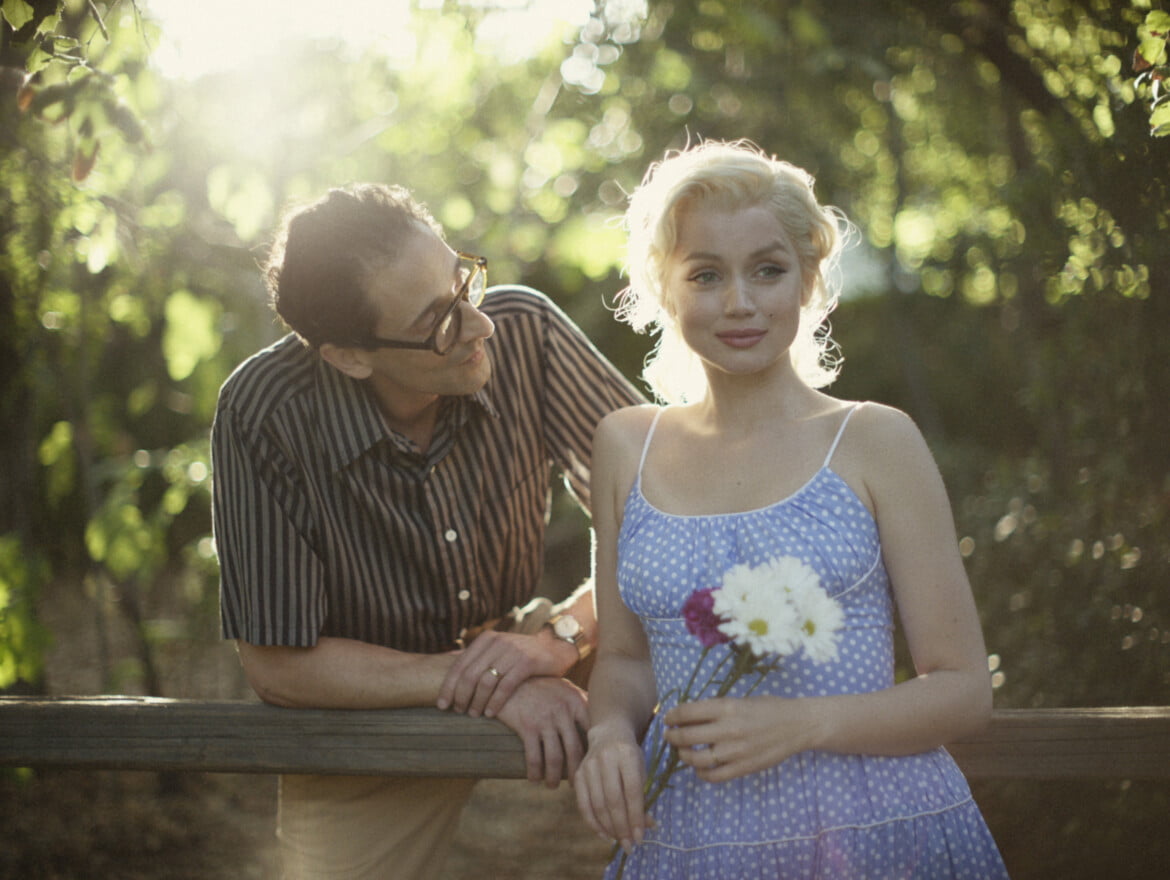 Blonde is a tragedy in heart wrenching detail, told in leaps through Norma Jeane Mortenson’s life–and that of her persona, Marilyn Monroe–and it’s difficult to watch at the very best of times.

Writer and director Andrew Dominik’s vision of Norma Jeane is short on happy memories. Any happy moments, in fact. In this story, she’s there to be used by the men in her life, and if she had any friends, they were fleeting or unimportant.

That’s what the film says at least.

Blonde is delivered in a style that feels inspired by David Lynch, and there’s a hint in particular of Mulholland Drive, but that film gave its characters purpose and vision. Dominkik uses trippy visuals, wild camera moves, and a random mix of black and white and colour to set a tone, and it’s very stylish, but it lacks the vision of Lynch’s style and story. And unlike Mulholland Drive, where Betty and Rita are so alive, Blonde pushes Norma Jeane into a corner and rarely lets her out.

There’s also no sense of why some of Blonde‘s scenes veer into chaos or black and white, unless it’s just to paint her erratic moods, and the struggle she has with the character of Monroe.

That theme plays out frequently, and at times it was interesting, but Blonde treats Marilyn Monroe as the alter ego of a schizophrenic Norma Jeane, as if she suffered from the same fate as her mother. Even if that were true, the film never offers sympathy for her. When things are bad or strange, or even perverse, the film zooms in closer.

What are we supposed to take from that as an audience?

Outside of the visual style that I did appreciate occasionally–where the film did look spectacular, even if it felt wrong–the best credit I can give Blonde is that Ana de Armas is nothing short of jaw-dropping as Norma Jeane.

Blonde gives de Armas an incredible space to work in, and she nails every scene. She is sad and potent, dark and bright, and sometimes those are moments apart. She takes the emotions of the script and sharpens them, and that’s also what makes the entire film so hard to watch. She is an excellent actor working with incredibly dark material, and she makes it all painful to watch.

With de Armas, it’s all too easy to believe the endless tragedies, and Marilyn’s horrible fate time and again.

Coming back to my biggest complaint is that even with that great performance, where Blonde fails is that it takes every bit of Norma Jean’s agency and ignores it. There’s no pride or self determination and I have a hard time believing that’s true of someone who was said to be as smart as Norma Jeane.

There’s a lot of history to Marilyn Monroe’s story, and I can’t believe that this film could spend so long–an unbearable 166 minutes–focusing solely on the worst of her life without a single reprieve. Give me triumph and joy that last more than a few seconds!

The film briefly respects how smart she was, suggesting it was that very reason and she connected with playwright Arthur Miller (played by the fantastic Adrien Brody), but it doesn’t give her much credit beyond that.

As a vehicle for de Armas it’s a powerful film, but as a biopic, it has no idea how to build a rich character with a path or a journey.

And frankly, while it’s comprehensive in details, it’s too long, too dark, and completely misguided in its quest.

As many have already asked, who is it even for? And at the same time, anyone who thought the CGI fetus was a good idea should be expelled from filmmaking forever.

My review? Avoid this film at all costs.

All images courtesy of Netflix.