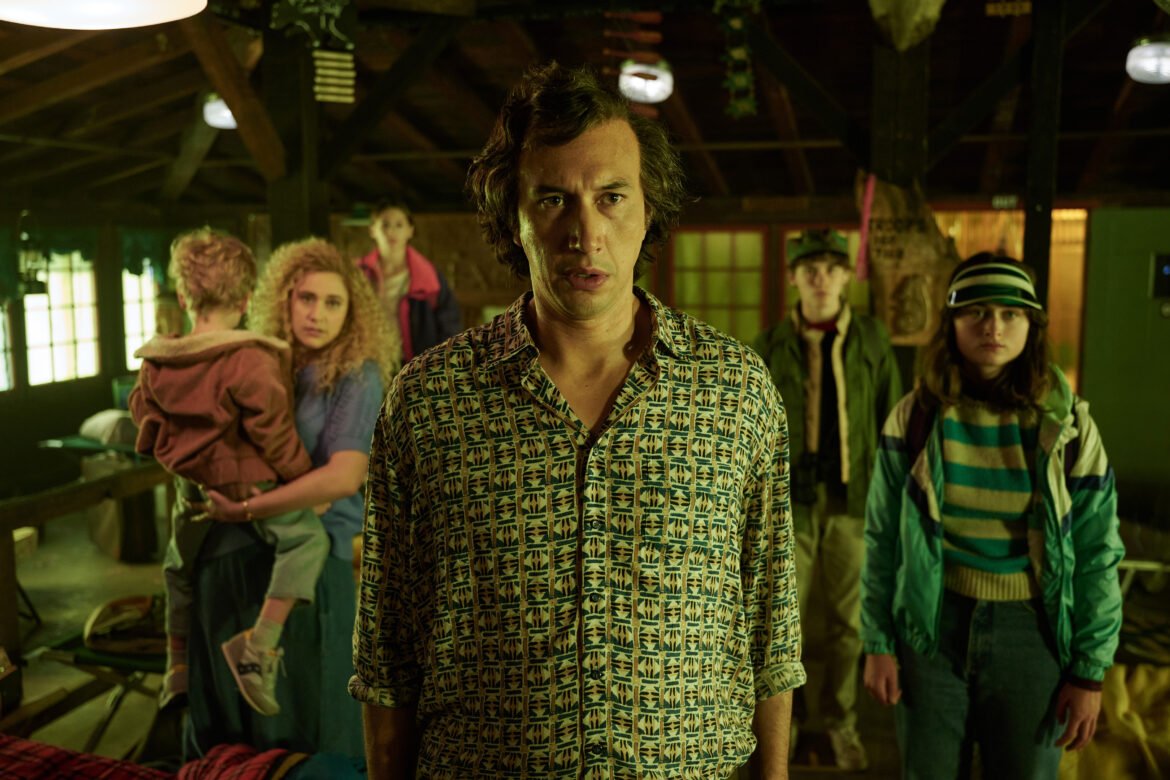 While undeniably ambitious, writer-director Noah Baumbach’s adaptation of novelist Don DeLillo’s seminally strange White Noise is a shrill, obvious, and often painfully annoying disaster of epic, indulgent proportions. Reducing DeLillo’s dense, heavily referential text to what’s essentially a lumbering, inarticulate cluster-bomb, Baumbach’s film is less a pointed satire than an overwrought collection of skits and sketches; less a critical takedown of consumerism, academia, and end of days ideologies and more like National Lampoon’s Apocalyptic Vacation. White Noise is a film too self centred, showy, and self congratulatory to realize it has become the very thing it sought to parody in the first place. But if nothing else, the title remains appropriate. This film is very white and extremely noisy.

White Noise centres around the misadventures and anxieties of the Gladney family, a typically extreme and vapid product of empty 1980s intellectualism and excess. Patriarch Jack Gladney (Adam Driver) teaches “Hitler studies” at the local college, despite having little connection to his course material outside of the obvious prestige and controversy it courts. His wife, Babette (Greta Gerwig) is suffering from bouts of melancholia and depression; self-medicating with the help of a mysterious drug of unknown origin. Their eldest kids (Sam Nivola and Raffey Cassidy) are know-it-all experts in the making that take after their parents, despite their seeming insistences that they are better people from a younger generation. Their functionality as a family unit is challenged by a catastrophic event: a cloud of toxic nuclear waste that causes widespread panic.

Initially, the pace and style of White Noise kind of makes sense. Baumbach can’t adapt DeLillo’s work in the most literal of sense, so he attempts to spin the writer’s richly detailed prose into a film that sounds chaotic and looks like pure eye candy. People don’t so much talk to each other as much as they try to talk at each other, stepping on other people’s already overly verbose ideas in a bid to hold dominion over all of their shallow, pointless conversations. This seemingly banal chaos and posturing is meant to offer a counterpoint to potentially real and life challenging threats that come later in the story, but Baumbach always leans heavier into the mundane than he does into what it all could mean in a larger context.

When reading a novel that challenges assumptions of form and function like White Noise does, it’s easier to examine and accept the rhythms of the author involved. Themes, ideas, opinions, and connections come more naturally. The book can easily be read again and enhanced in the mind of the viewer over time. Baumbach is clearly banking on the belief that his take on DeLillo will have to be viewed more than once to make perfect sense, but unfortunately this adaptation is so surface level obvious that almost all of it lands with a thud on the first viewing, and the tone is so patently obnoxious and over-cranked that it’s tough sitting through it for a single watch. It’s a perfect example of a film that thinks it’s far smarter than it really is, to a point where Baumbach – a fine filmmaker who has made some excellent films – succumbs to what should’ve been an obvious folly in hindsight. 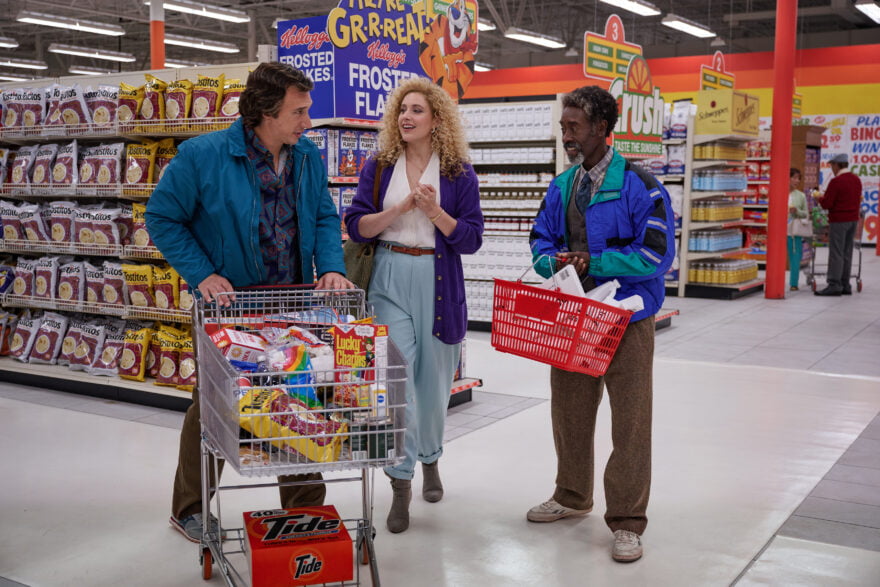 White Noise is chock full of monologues, soliloquies, and arguments that drone on endlessly, wearing out their welcomes quickly and extending long after they’ve ceased to be amusing. The dialogue comes across as so hackneyed, tin eared, and inorganic – something that works to the novel’s favour and to a complete detriment on screen – that it takes a cast of highly skilled actors and makes they seem like performers doing particularly awful community theatre. (Seriously, there isn’t a good performance to be found here, amounting to some career worst work from almost everyone involved.) There are long passages of White Noise that sound like someone is reading the viewer an entire volume of McSweeney’s from cover to cover while adopting a funny voice. Even the attempts to capture the 1980s vibes and jabs at pop culture captured by DeLillo are nothing more than cloying, empty nods and easter eggs that are highbrow, pandering equivalents of the same things people criticize super hero movies for containing. It so desperately wants to court a certain type of viewer that it ends up alienating anyone outside its club and flat out insulting the intelligence of those it seeks to impress.

It’s easy to see why Baumbach would want to make White Noise today, even though it looks like a terrible idea on paper. This story of a broken society trying to deal with a collective trauma told from the perspective of a bunch of know-it-alls who only assume the best or worst of any given situation is nothing if not timely. Today as in DeLillo’s material, there’s a perverse fascination that people have with tragedies. To some degree, White Noise is rather adept at capturing a particular sort of toxicity exhibited by people who try to maintain a stranglehold on all of their comforts during a time of crisis, but it’s all window dressing here that signifies nothing deeper than the obvious. For all of its many tonal shifts – from comedy to thriller to melodrama and back around again – White Noise remains monotonous throughout.

It’s like looking at a department store window display. It might be well put together, and the craft is admirable, but it’s never something that’s worth a second thought. You know from looking at it precisely what it’s trying to convey. The cinematography and score are both first rate. There are several visually memorable sequences (a Godardian styled traffic jam, duelling monologues about Hitler and Elvis, Jack stopping at an eerie and seemingly abandoned gas station, a literal show-stopping musical number to close things out), but they only bring things briefly to life and never distract from how White Noise is bereft of any genuine wit or narrative fire. That’s especially troubling once this thing gets around to a conclusion which heavily implies that none of this mattered in the first place.

Baumbach remains as gifted of a filmmaker as he ever was, but White Noise is far and away the most egotistical cinematic exercise of the year; a film made simply because its director willed it into existence without ever coming up with a coherent reason for why it needs to be made in the first place. In a year with notable movies made by filmmakers reflecting on their own lives (The Fabelmans, Bardo, even Clerks III), it’s no small feat to make something even more ego driven than this. It’s a work of misplaced energy and excess that isn’t entertaining or thoughtful enough to excuse just how profoundly annoying and didactic it comes across. It’s far from the worst film of the year, but White Noise might be the hardest misfire to sit through from start to finish. 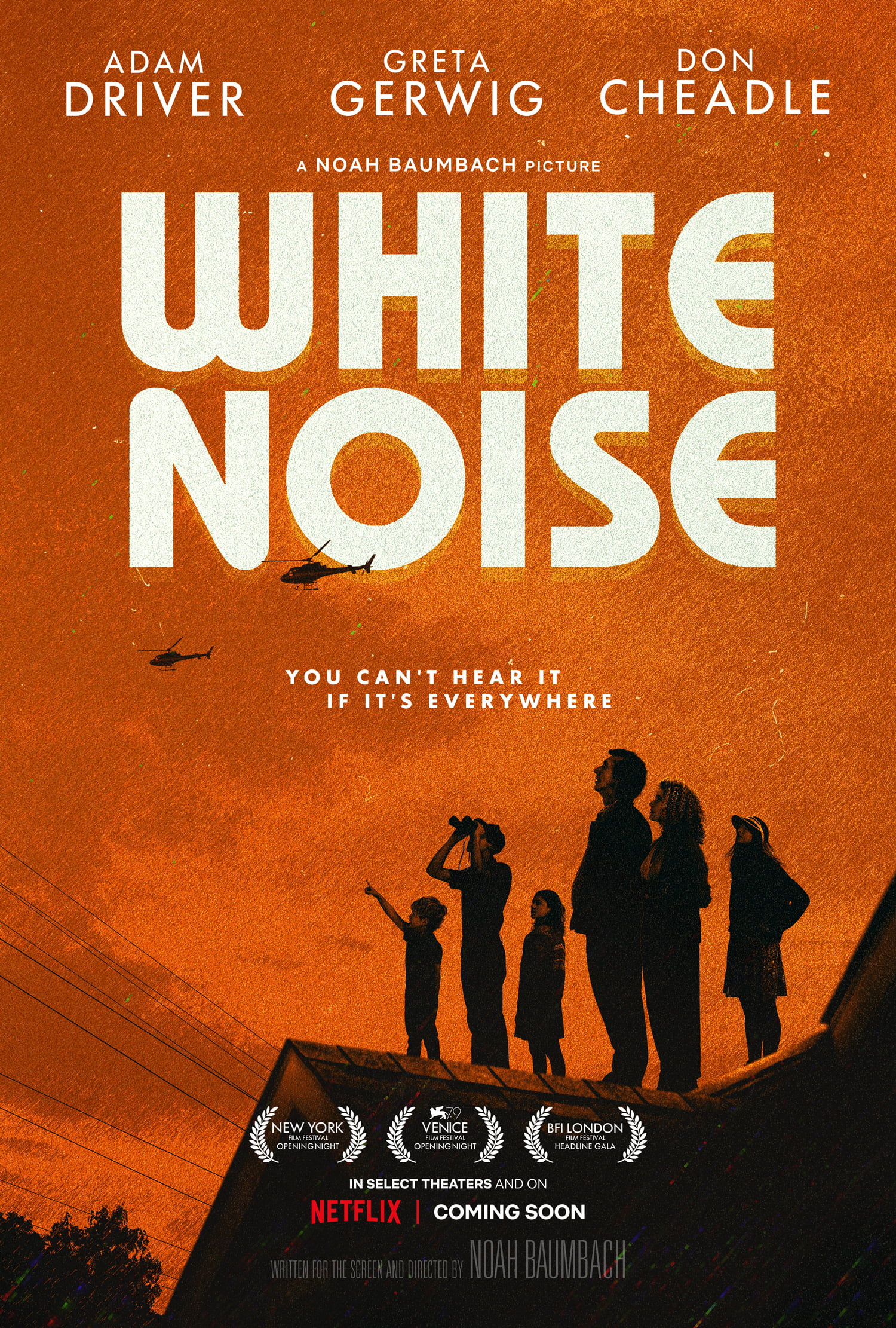