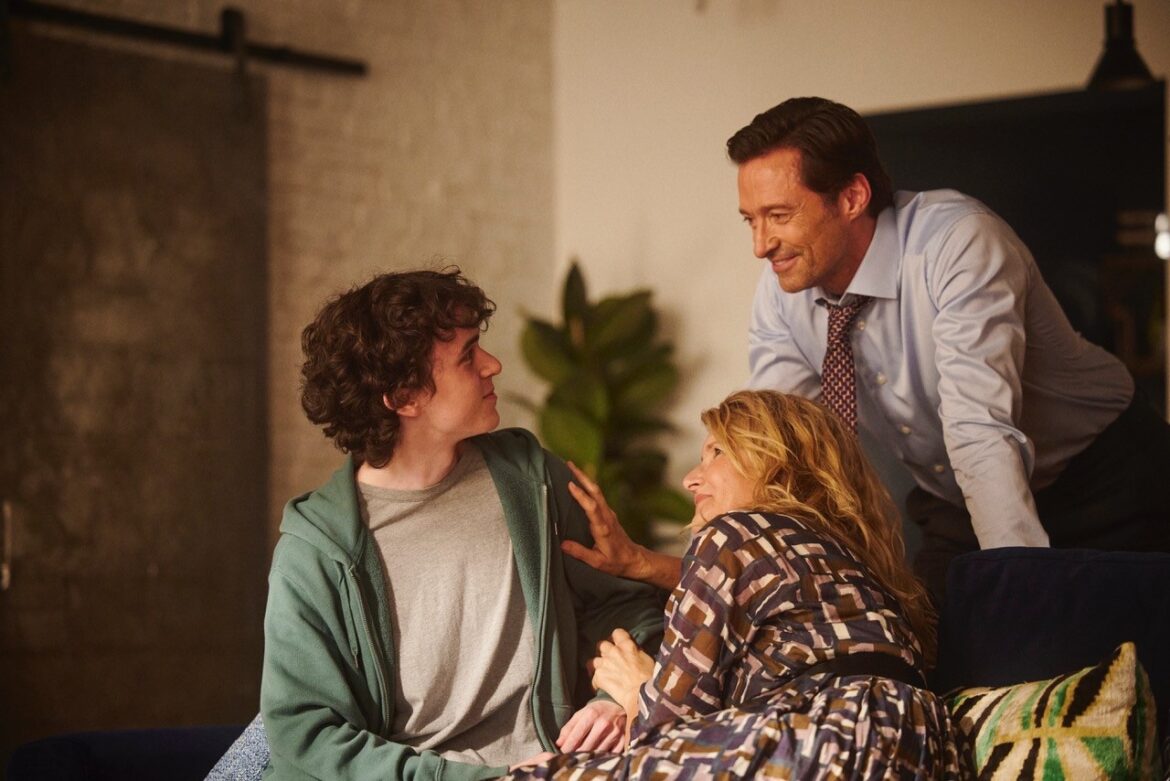 Although it does have moments of genuine human drama throughout, director Florian Zeller’s The Son uses unsubtle emotional manipulation to get its points across. Melodramatic to a fault, The Son – Zeller’s follow-up to his outstanding Oscar nominated first feature, The Father – takes an enriching, interesting idea fraught with potential, dumbs it down, and turns in something that’s both underwhelming and overwhelming at the same time. The Son lays things on pretty thick, but audiences have seen that version of similar stories before done much better than this, leaving one to wonder if a lighter touch should’ve been in order.

Hugh Jackman stars as Peter, a white collar workaholic who’s about to take a job working for a major political campaign. He also recently had a baby with his new and younger wife, Beth (Vanessa Kirby), and is currently juggling his professional and familial duties, when his ex-wife Kate (Laura Dern) pays him a sudden and concerned visit. Kate and Peter’s teenage son, Nicholas (Zen McGrath), was caught skipping school for the past month and has fallen into a deep depression. Prone to disassociating, lashing out, and self-harming, Nicholas has made his mother’s life unbearable, prompting her to ask if Peter can look after him for awhile. Peter reluctantly agrees, knowing that their relationship isn’t the greatest and that tension exists between Nicholas and Beth.

It’s a great idea for a film: what happens when an emotionally and physically distant parent suddenly has to care for a child that can’t explain what exactly is wrong with them? Jackman is quite good as the father, and McGrath exhibits talents akin to a younger Paul Dano as the troubled young man, but The Son doesn’t do well by either of their efforts. Instead of letting the characters breathe, progress, and eventually converse, Zeller (once again adapting one of his own plays for the screen) becomes so resolutely focused on creating and maintaining an over-the-top mood that the performances get lost amid a lot of unnecessary noise.

Instead of probing deeply into whether Nicholas is flat out rejecting love and concern like most teens often do or there’s something more debilitating going on, Zeller reduces the character’s ongoing issues to nothing more than a metaphorical warning sign flashing over the character’s head. Similarly, Zeller drops the ball on depicting Peter’s fears of fatherhood, reducing that topic to only the most basic of terms with a single overwrought scene where he confronts his own harsh, absentee father (Anthony Hopkins, in what amounts to little more than a high profile cameo). There’s so little in the margins of The Son that many scenes come across as repetitive. There’s plenty of shouting, tears, and heart string tugging, but The Son also spins its wheels by never going to any interesting or new places.

Instead of being engaged with the family dynamics in play, all I could think about while watching The Son was an episode of The Simpsons where the beatnik parents of tightly wound Ned Flanders took their rebellious kid to see a therapist, exclaiming that they’ve “tried nothing and [they’re] all out of ideas.” The overall neglect depicted in The Son isn’t overwhelming – with Peter and Beth trying to engage Nicolas in activities – but even in the film’s few joyful moments, nothing substantial is happening. That makes the film’s eventual slide into darker, heavily telegraphed territory feel eye rolling at best and uncomfortably icky at worst.

Zeller makes some odd choices with his second film that further drag things down. The visual style is uncomfortably antiseptic in appearance, meaning there’s no interesting distractions to maintain flagging audience interest. The sound mix makes the puzzling decision to keep a lot of natural city noise in, leading to some scenes feeling like they were shot next to an active construction site. Dialogue (courtesy of screenwriter Christopher Hampton’s adaptation and translation) often has the tin-eared sound of voiceovers coming straight from public service announcements.

But worst of all, The Son proves to be a no-win situation all around. If Zeller goes in the direction the film is always heavily and obviously pointing towards, it will make the whole thing feel useless and futile. If Zeller doesn’t end up going there, The Son ends up feeling like a waste of time that says nothing and does nothing. Around the halfway point of The Son, it dawned on me that this material and approach to it wouldn’t produce a satisfactory conclusion no matter which direction it chose to go in. There are a handful of scenes and beats in The Son that work rather well and feel like real moments or conversations between family members, but there’s far too much clutter and not enough specificity to make them mean much of anything.

The Son opens in select theatres – including at TIFF Bell Lightbox in Toronto – on Friday, January 20, 2023. 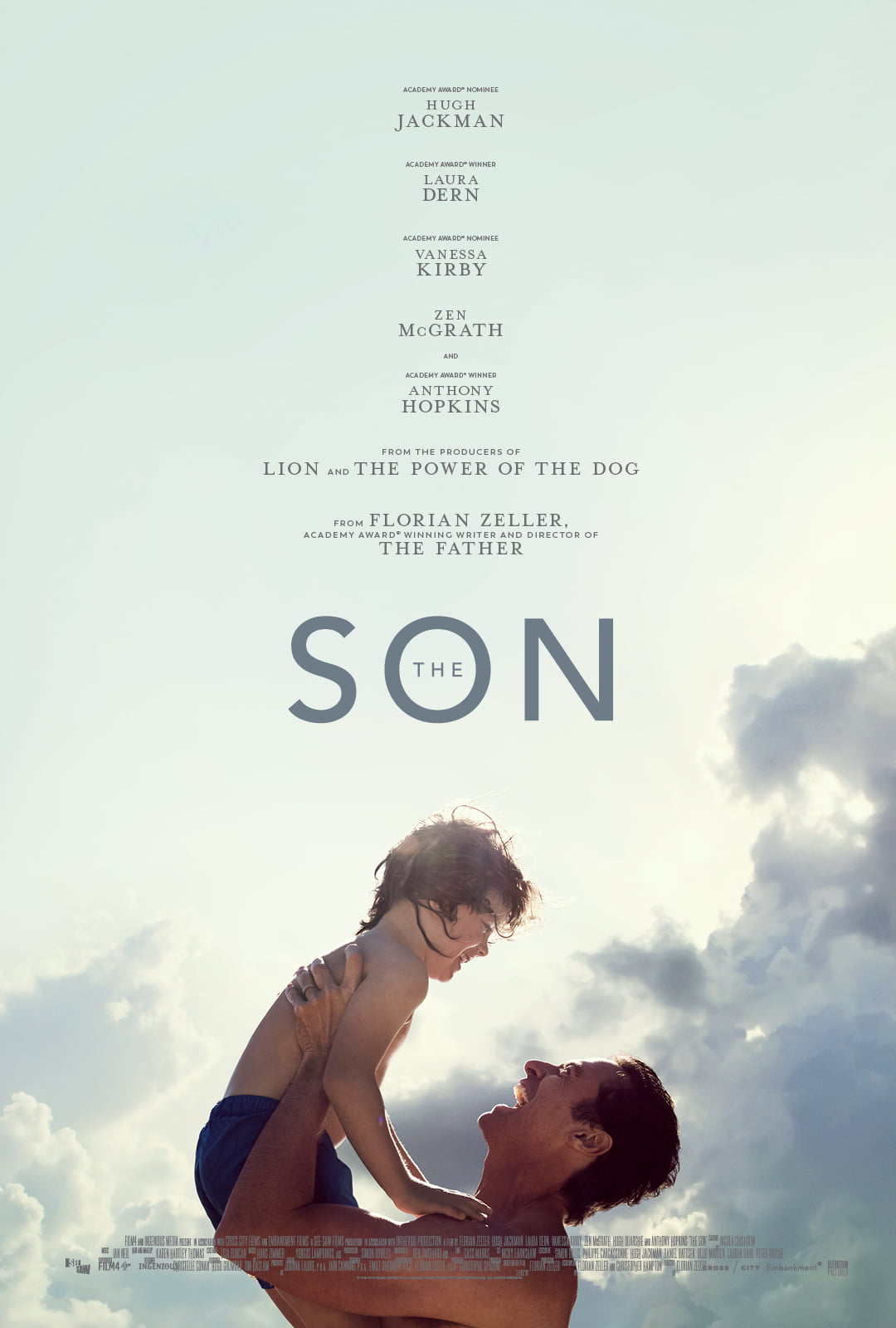