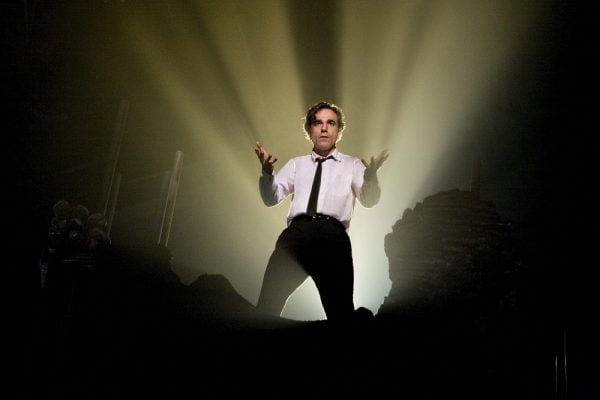 Director Rob Marshall, known for his history on Broadway and the 2002 film adaptation of Chicago, returns to the screen with a spectacle that is awe-inspiring, beautifully filmed, and just a little flawed.

This time Marshall has helped adapt the Broadway hit Nine for the screen, with Daniel Day-Lewis as the obnoxious, world-renowned movie director Guido Contini, who is struggling to put all of the pieces together for his next big film.

Looking for some inspiration from the women in his life, namely his wife, his mistress, his muse, and his mother, Guido’s life descends into chaos as he tries to make his art, without ruining his life.

Costarring Nicole Kidman, Penelope Cruz, Judi Dench, Stacy “Fergie” Ferguson, and Sophia Loren as the various women in Guido’s life, the film is star-studded to say the least, and it’s powered by each mind-blowing, and sometimes even mind-numbing, musical number. Each song and dance routine attempts to outdo the last, and it has to be said that Fergie and Kidman own the stage in terms of their vocals.

It’s entertainment that is frequently wonderful to behold with Daniel Day-Lewis playing the pitch-perfect star for this extravaganza, which should surprise no one.

If the routines are mind-blowing though, the visuals are heart-stopping. Nine is pure eyeball candy and it doesn’t stop for the full length of the film — every moment on screen is perfectly shot and beautiful — simply the best cinematography I’ve seen in years. Director of photography Dion Beebe deserves all the praise I can offer, and manages to make some of the less interesting bits of the film sparkle.

Where the film sadly falls flat on its face is in the between moments, as it moves between one song and the next, and explaining the lives of these characters. It amazes me a little to say it, but I’ve never been so dazzled by one part of a film, and then utterly disappointed in the rest.

Screenwriters Michael Tolkin and Anthony Minghella, and Marshall, simply can’t get past the songs and bring no life to these characters who actually seem dull at times, despite the fact that Guido is gallivanting between the women who keep him living and breathing.

Despite the weak script, Nine is still a spectacle worth seeing. I only have the DVD to go by, but I would imagine the Blu-ray edition is well worth the investment for added oomph.

While I was sorely disappointed in the wayward script, I was still enthralled by Nine, a rare kind of circus act that has you shifting your gaze from one ring to the next, waiting to see what comes next.

The flaw is that, often, like any circus act, there’s no connection between what happened in one ring, and what’s coming in the next. When the jugglers start throwing flaming axes in the air though, you can bet you’re not going to turn your head away.

On DVD, Nine has an extensive list of entertaining extras, ranging from an audio commentary, a behind-the-scenes look, features on the choreography, music videos, and an interview with Day-Lewis.

Director Terry Gilliam has a singular, cinematic style that is hard to describe.

Trippy, whimsical, and dark, his movies have always been different from most other directors. His style was especially put to the test, however, for the Imaginarium of Doctor Parnassus, a film that might have been slightly more straightforward if it weren’t for the tragic death of actor Heath Ledger.

Promising to complete the film, with Ledger’s character intact but altered, Gilliam deserves a lot of praise for finding a way to make this film even possible.

Telling the tale of a travelling showman who can guide the imaginations of the people he meets, the Imaginarium of Doctor Parnassus weaves one man’s story through a veritable strainer, with multiple actors playing the same role throughout the film.

At the heart of this tale is the mischievous Doctor Parnassus who made a bet with the devil a thousand years ago and won his own immortality. Much later in his life he went back, however, and traded his immortality for youth, but only under the condition that he would give up his daughter to the devil when she turned 16.

This conundrum is what drives Doctor Parnassus now, as he is desperate to save her, making a new wager with the devil, proposing a challenge that will see his daughter go to the victor.

With Tom Waits playing Mr. Nick, the devil, Lily Cole as the daughter Valentina, Christopher Plummer as Doctor Parnassus, and no less than four actors playing different version of Tony (namely Heath Ledger, Johnny Depp, Jude Law, and Colin Farrell), the film is weird and wonderful to say the least.

Not all the critics gushed about the film, but Peter Travers of Rolling Stone was one critic who had some good to point out in Gilliam’s film.

“Despite a shaky framework, the magic works,” Travers wrote. “It’s a chance to see Ledger one last time in the act of doing what he loved. Take it.”

Originally released in 1998, Saving Private Ryan is a gripping, moving drama about a squad of soldiers charged with the dangerous mission of finding one lone soldier in the midst of war-torn Europe.

After his three brothers were killed within days of each other, the military takes it upon themselves to send out a rescue party for the one surviving son so his mother won’t have to grieve the loss of all four of her boys. The problem is that Private Ryan, played by Matt Damon, is lost somewhere deep inside the enemy territory.

Tom Hanks plays Captain John Miller, a driven soldier who battles through the terrible battle on the shores of Omaha Beach, only to be sent on this mission with a handful of his best men. While he dreams of finally being sent home, the mission is a hard one for everyone to accept, but as the soldiers he meet encourage him, Captain Miller also sees it as an opportunity to perhaps finally be sent back to his wife.

Co-starring Tom Sizemore as Sergeant Horvath, plus Giovanni Ribisi, Adam Goldberg, and Paul Giamatti, to name a few, Saving Private Ryan is a remarkable film because it is such a moving tribute to the men who served in this terrible war.

In particular, the first twenty minutes, depicting the landing on Omaha Beach, is a visceral, realistic, and horribly accurate depiction of one moment during one of history’s worst wars. It is cinema at its most realistic and it will leave you breathless if you’ve never seen it before.

From there, the film honestly flounders a little, losing energy and momentum, but the story never gets lost. This is a story that will make you really think about the sacrifices of war, the soldiers who died in past wars to protect our very freedom, and the soldiers who are out there today.

The Sapphire Series edition of the film, which comes with two Blu-ray discs — one including the film and a second for features — is an eye full, and a tribute to every element of Spielberg’s vision.