Film Friday: ‘The Eagle’ and ‘Just Go With It’ 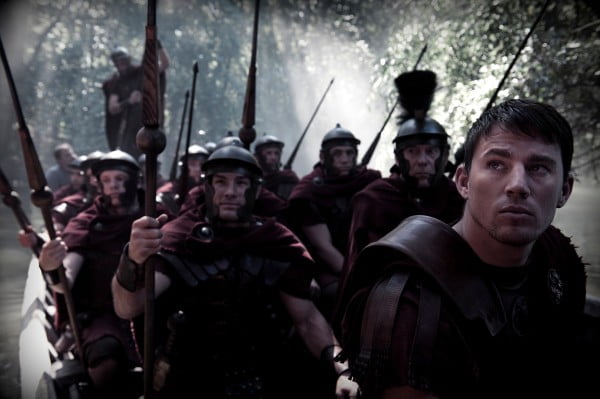 Opening this weekend in theatres across the country: Channing Tatum and Jamie Bell star in the epic adventure, The Eagle; Adam Sandler tries to woo a younger woman in the comedy, Just Go With It; William Shakespeare’s classic tragedy gets a comic take in the animated Gnomeo And Juliet; plus a look at the music documentary, Justin Bieber: Never Say Never.

A chance encounter with a brave slave named Esca, who is played by Jamie Bell, changes Marcus’ life though, and sees the duo heading north, across Hadrian’s wall to search for the lost eagle and restore the Aquila family name. Along that path, Marcus will have to hide in the shadow of his slave, or risk getting both of them killed by the tribes of Caledonia, known today as Scotland.

Although Macdonald’s film is unlikely to win any awards for acting, The Last King of Scotland director earns charming performances from Tatum and Bell, who easily carry this film as something of a buddy epic. Both men are strong leads, with a chemistry that speaks of the characters’ shared honour, pride, and friendship.

Their performances, and the performances of all of the warriors of the north, lends utter credence to the feeling that we’re following these people through 140 AD Britain. I’ve very rarely felt so immersed in another time, another place, and another culture, but The Eagle handles all of these elements perfectly. The dialogue by Jeremy Brock, which takes a decidedly modern slant, was unfortunately a little hard to take, as are some of the last moments in the film, but these are forgivable failings next to the film’s overall story and mood.

There are probably only two reasons you might want to see Just Go With It: either you’re a guy, and the ads featuring Brooklyn Decker had you convinced the moment she appeared in a bikini, or you’re a fan of Adam Sandler and you’ll watch his films no matter what.

Either way, it’s hard to imagine any circumstance where you’re going to leave the cinema happily after seeing director Dennis Dugan’s Just Go With It.

Sandler stars as Danny, a plastic surgeon who is trying to woo a much younger woman, played by Decker. Trying to cover up for a lie that he got caught in, Danny is forced to pretend that he’s in the process of divorcing his wife, who actually happens to be his assistant, played here by Jennifer Aniston. As the lie mushrooms into even more lies, Danny and his friends, and his potential new love, will head to Hawaii for a trip that will likely change everything.

Speaking of the film’s pedigree, the film is clearly a dog under the direction of Dennis Dugan, who directed Grown Ups, I Now Pronounce You Chuck & Larry, and National Security, to name a few. If those are film you enjoyed, then perhaps you’ll enjoy Just Go With It, but critics have been slamming the film, calling it “unfunny,” “predictable,” and even “depressing.”

Although Scott Bowles of USA Today did note in his review, “When Adam Sandler isn’t making bathroom jokes or talking like a 2-year-old with a sinus infection, the guy can be disarming.”

In this oddball animated comedy, James McAvoy and Emily Blunt voice the whimsical Gnomeo and Juliet, a love story between two garden gnomes separated by… the colour of their hats.

In one yard, the blue-hatted gnomes frolic, and next door, the equally happy red-hatted gnomes have their fun, but when Gnomeo and Juliet fall in love, it causes strife that could keep the would-be lovers from being together.

Co-starring Michael Caine, Maggie Smith, and Jason Statham, the film is getting some of the best reviews this week, with Ty Burr of the Boston Globe calling it, “As enjoyable as non-Pixar kiddie flicks get, a high-spirited, high-end comic revamp of Big Bill’s eternal tragedy.”

While Richard Corliss of TIME Magazine commented, “Defiantly derivative and groaning from joke overload, this Disney pickup takes more than half its running time to find a distinctive tone, a reason for being.”

Who knows though, maybe you’ll want to check out the film to see how Bieber went from a YouTube sensation, to being one of the biggest artists in the world?