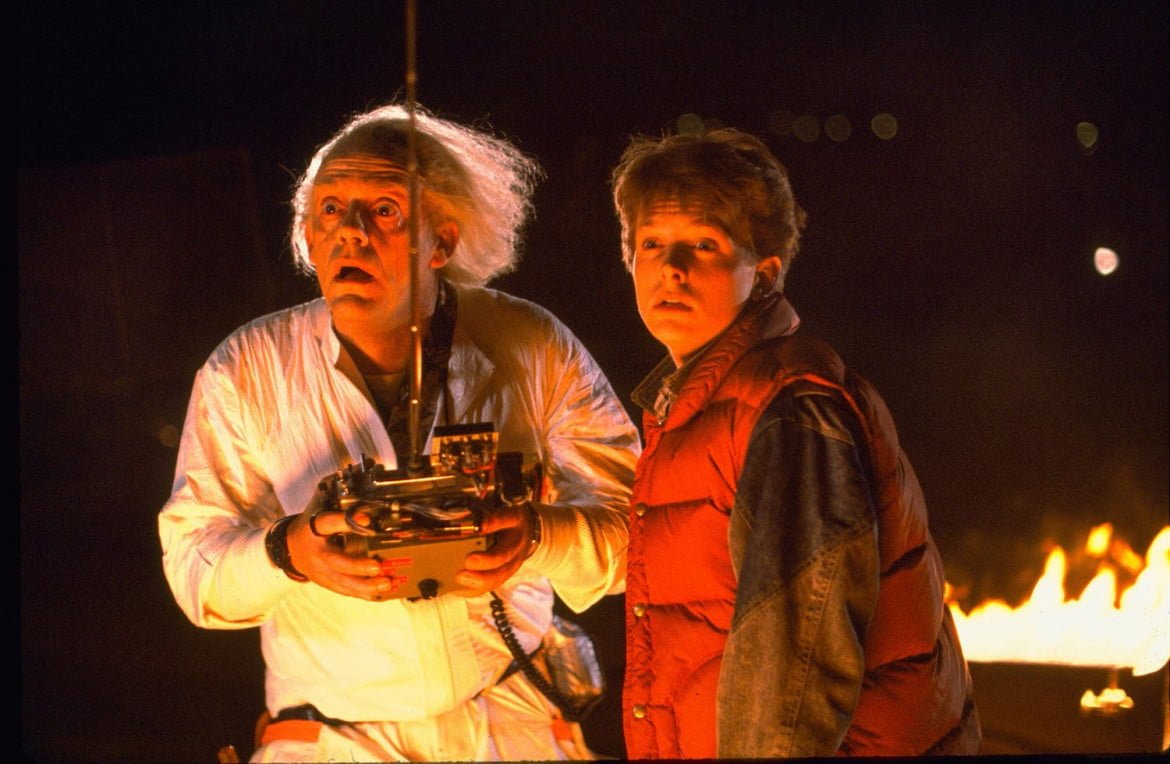 The rainy days of spring are here, and since it’s a very quiet week for new releases, I thought it was a fine opportunity to count down ten of my favorite rainy day movies. Which may make you wonder–what makes a great rainy day movie? If you ask me, it all comes down to rewatchability, brilliant casting, great writing, and off-the-wall stories.

Since I couldn’t include all of my favorite films in this list, honourable mentions go out to Stranger Than Fiction, Kate & Leopold, and Ferris Bueller’s Day Off, the last of which didn’t make the list only because it’s actually on television way too often.

Back to the Future
Try to say something bad about this movie, I dare you–it’s a classic action-comedy from the 80s and to this day one of the best films any of the cast, or director Robert Zemeckis, have been involved in, and that’s really saying quite a bit.

Set in 1955 and 1985, the film really needs no introduction for anyone over the age of 20, but it follows the adventures of the young Marty McFly, played by Michael J. Fox, as he mistakenly ends up in Dr. Emmett Brown’s time travelling DeLorean, which takes him back to his parent’s high school days.

Endlessly quotable, funny, and endearing, Back to the Future was the first movie I thought of when I started writing this list.

The Incredibles
Pixar’s films tend to be great rainy day movies, but my favorite has to be the The Incredibles, thanks to a brilliant script, fast action, and a perfect mix of characters.

In the film, a former superhero known as Mr. Incredible goes back to work trying to be a hero, even though his super powered family don’t know he’s living a double life.

While the film is wonderful because of the main cast–Craig T. Nelson, Holly Hunter, Samuel L. Jackson and Jason Lee–it’s made all the better by director Brad Bird’s voice work as the zany Edna ‘E’ Mode.

The Girl Next Door
Admittedly, I’m a huge fan of Elisha Cuthbert, but this movie made it on this list because of at least three other merits: a fantastic script, Emile Hirsch, and the great Timothy Olyphant.

For a film that could have been goofy, juvenile, and simply dirty, The Girl Next Door is a shock because it’s both endearing and funny, and Cuthbert and Hirsch work really well together throughout the offbeat story.

The Princess Bride
Back to the 80s and there are few romantic comedies that win such universal approval as Rob Reiner’s Princess Bride, the same director who also made When Harry Met Sally, Stand by Me, Misery, and A Few Good Men.

Cary Elwes stars as the brave and gallant Westley, a farm hand who is attacked by the Dread Pirate Roberts as the woman he loves, Buttercup, played by Robin Wright, is set to be married to Prince Humperdinck, played by Chris Sarandon.

Told through a grandfather who is reading the story to his grandson, The Princess Bride is sweet and charming, and brilliant whether you’re young or old, which is at least part of what makes this film such a classic.

Zombieland
On a completely different note there’s director Ruben Fleischer’s Zombieland, a blood-in-your-face action-comedy that stars Jesse Eisenberg as a young guy trying to survive after a zombie apocalypse has effectively destroyed civilization.

Teaming up with Tallahassee, played by Woody Harrelson, Columbus (Eisenberg) just wants to reach Ohio so he can see if his family survived, but when the duo meet Wichita and Little Rock, played by Emma Stone and Abigail Breslin, their plans take a big detour.

With killer special effects, a cameo by Bill Murray, and countless hilarious encounters with zombies of all shapes and sizes, Zombieland is just a lot of fun, whether you like horror movies or not.

The Rock
Sean Connery, Nicolas Cage, and Ed Harris star in what is unequivocally one of the greatest action films ever made, courtesy of director Michael Bay.

Set in San Fransico, Cage plays Dr. Stanley Goodspeed, a nerdy FBI agent who may be the city’s only hope of preventing a disaster when a group of renegade soldiers take over the former Alcatraz prison and plan to detonate toxic nerve gas if they don’t get their demands.

Featuring cinematography by the great John Schwartzman, The Rock is a big, audacious action movie that never slows down until the very end.

Dark City
Although I would normally reserve lighter movies for rainy days, there is something to be said for tense, smart, and gloomy films, especially if you’re talking about Alex Proyas’ Dark City.

In this brilliant, stylish noir thriller, Rufus Sewell stars as John Murdoch, a man who seems to be suffering from amnesia, trying to come to grips with a wife he doesn’t remember and a murder he doesn’t believe he committed as dark, powerful men chase after him in a decaying city.

Although the film has a number of outstanding performances, especially from Kiefer Sutherland and William Hurt, I would say the “star” of the film is the art direction and visuals, which are frankly awe inspiring.

Despicable Me
There are lots of good animated movies, but it takes something special to be as funny and heart-felt as Despicable Me.

In this wildly funny comedy, Steve Carell voices Gru, a criminal mastermind who needs to do something huge to make up for years of unimpressive heists. That’s where three orphans come into the story, giving Gru an opportunity he can’t miss to use the kids as a distraction against his arch nemesis. What Gru doesn’t expect is that these three girls will come to mean a lot more to him before the job is over.

The film is goofy, funny, and just a little odd, but it’s also laugh-out-loud funny and one of Keanu Reeves’ most enjoyable performances because it’s simply fun, without trying too hard.

Big
And finally, there’s Penny Marshall’s Big, with Tom Hanks in the role of a little boy named Josh who wishes he could be an adult. His wish is of course granted, leading to adventures on a scale he never imagined before.

Wistful and sometimes outlandish in the way Josh deals with life as an adult, Big is one of the best comedies of the 80s, and if you’re going to take my advice, a great way to spend a little spare time in front of the television, especially if you’re a big sap like me.