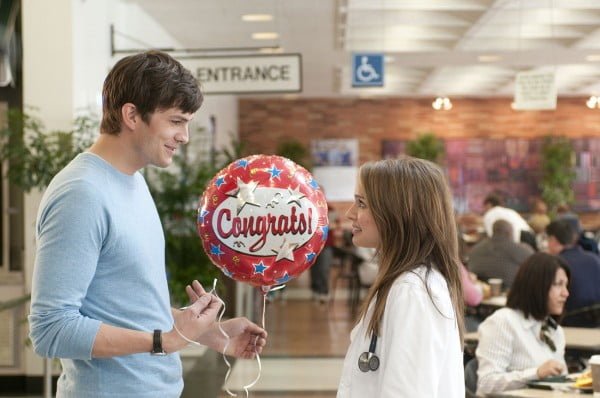 Ashton Kutcher and Natalie Portman in No Strings Attached

Based on RottenTomatoes.com, which has the film at a mere 49% fresh, No Strings Attached is not the kind of movie you probably skipped in theatres, but may finally want to check out on home video. But take this warning from Rex Reed of the New York Observer who wrote, “Portman is herself partly to blame. Nobody with an upwardly mobile career who is suddenly being taken seriously should co-star in a movie with Ashton Kutcher.”

Ryan Gosling and Michelle Williams star as Dean and Cindy in writer and director Derek Cianfrance’s dramatic story of a couple’s relationship as it forms and then falls apart under the strain of their lives.

Falling in love while Cindy is at school for pre-med, the lovers quickly decide to get married when they realize she is pregnant, but across the year’s of their relationship we watch as they quickly slip apart.

Watching the final moments of their relationship, interspersed between the early days of their lives together, Blue Valentine is a heart-rending, tragic love story that earned Michelle Williams an Oscar nomination for her performance. Although there are some critics who found the story overly sentimental, the majority of critics praised the film’s performances and the story’s overall realism.

“The best of it plays like an acting exercise that serves the intimate,” wrote Michael Phillips for the Chicago Tribune, “often bruising relationship at the core. Gosling seems to be pulling from an impressive bag of performance tricks, Williams from a deeper well, drawn from life.”

Mary F. Pols wrote for Time Magazine, “The scenes cut so close to the emotional bone that you can understand why they might cause a panic amongst MPAA boardmembers, although of course, it’s nothing to be afraid of: just the realism of love in its varied forms.”

Who knows, maybe you’ll even want to check out the film to see how Bieber went from a YouTube sensation, to being one of the biggest artists in the world?

Despite all reason, and the plethora of fantastic movies from this era, a lot of people have very fond memories of Legend, and I really can’t imagine why.

Although I know lots of people who love this film, I’m simply not a fan, and I think Christopher Null of Filmcritic.com sums it up the best when he wrote, “The movie is enchanting and has moments of magic, but it’s an utter train wreck, overwhelmed by cheesy special effects, dialogue writ insanely large, and a kind of goofy plot.”

For the fans out there though, there are lots of extras on the anniversary Blu-ray, including a feature-length commentary by Ridley Scott on the director’s cut of the film, plus making-of featurettes, deleted scenes, trailers, photo galleries, and the music video for “Is Your Love Strong Enough” by Bryan Ferry.