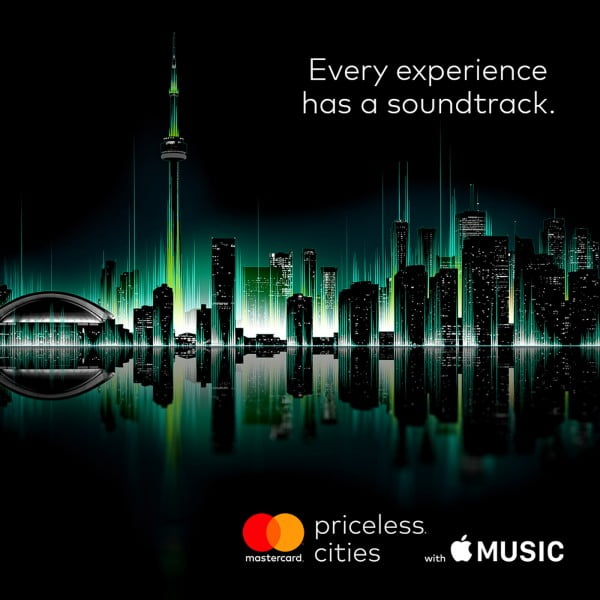 There are few things more satisfying than taking a walk around the city on a warm summer night with a carefully curated playlist pumping through a set of headphones. Mastercard and Apple Music know just that feeling and have taken it to the next level with celebrity constructed soundtracks made specifically for Toronto and Montreal.

A part of Mastercard’s Priceless Cities initiative – which offers cardholders exclusive access to unique experiences, events, and offers in 46 cities around the world (including Toronto and Montreal, obviously) – this partnership with Apple Music will bring together musicians and music aficionados alike to create a variety of playlists for all occasions.

Torontonians can groove to soundtracks created by country music superstar Dean Brody, Indie 88 on-air personality Lana Gay, and singer/songwriter/actor/philanthropist Keshia Chanté, while Montrealers can check out playlists from indie rockers The Drews or Joe Beef restaurateur David McMillan. Since starting on August 15th, several playlists have been made available over at priceless.com/applemusic and new soundtracks will be released every other week until the end of 2017. The soundtracks are made to reflect specific experiences, whether it’s getting ready to face the day, a night out on the town, or just chilling in the backyard with some buddies.

With each soundtrack serving as an eclectic reflection of the artists who helped put them together, it’s hard to go wrong, and the partnership between Priceless Cities and Apple Music will provide the playlist for a lot of fun nights in the city for the rest of the year.

For more information on Priceless Cities and to preview some of the playlists, head on over to priceless.com/applemusic.