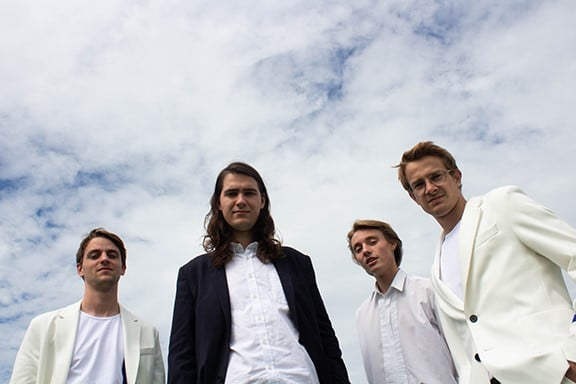 Straight from Belgium, the next exciting chapter in theatrical rock art is here thanks to The Black Gasolines and their new single “Furthermore.”

Out to rewrite rock and roll history, the song lands on the heels of their debut full-length, It Took A Lifetime — a 53-minute-long rock opera about a guy called Krist Milkeyway who looks back at his life in the form of a talk show while being in a coma.

After readying themselves from line-up changes, and musical direction, the completed package saw The Black Gasolines creatively charged and prepared to lay down tracks at the top of the pandemic in 2020. A stint in France was the artistic boost that fueled the group to write several completed bangers that would make the final cut of the album, and showcase their shared vision. “We became inspired by the drama of the bombastic classical compositions like the ‘Dies Irae’ by the Italian composer Giuseppe Verdi,” they reveal. “And with the more modern theatrical rock sound of Electric Light Orchestra, Supertramp and Klaatu, we went to the countryside of the city Poitiers in the south of France, so the songs could be worked out in another environment.”

After seven productive writing days, The Black Gasolines arrived back in Belgium with several demos. The Black Gasolines are not afraid to be bold, daring, exciting, dramatic on the cut, lending a passion behind lush instrumentation, and finely crafted melodies and, while they say there is still mystery surrounding the selection of their unique moniker, there is a calculated, creative strategy surrounding the 2021 LP, and its single “Furthermore.”

“Furthermore” bounds of the speakers, with rich use of saxophone, production elements, and harmonies; a modern take on the electrifying soundscape of the 70s and 80s. A twisting kaleidoscope of Gowan to Men At Work, Zep to Floyd, Queen to the Beatles, The Black Gasolines chases the listener into a labyrinth of big sounds and delectable lyrics. You’re singing along as much as you’re completely lost in the journey of the song.

Prior to the pandemic, The Black Gasolines have continually pushed to have their art heard live as much as possible playing up to 45 shows per year. With their innate desire to bring their music to their fans, the group has made stops across Europe, including taking the stages in Ghent, Antwerp, Amsterdam, and London. Their single “Long Way Suicide” dropped in 2019; its successor “Kangaroo Days” made its debut in 2020.

Now with It Took A Lifetime loaded and charged, the group is forging forward with their riveting stage show and an arsenal of epic tracks to go with it. The Black Gasolines also take their songs to live performances on YouTube, where listeners can hear the group before heading into the festival grounds, the concert clubs, and venues – getting a front-row seat to their exceptional charisma and uncanny ability to perform the tracks exactly as you hear them on the album.

The road to creating a sonically cohesive line-up has brought The Black Gasolines to the here and now. While sometimes it may have seemed to take a lifetime, it doesn’t take away that they’ve arrived.

And “Furthermore,” you’ll adore the album and its tremendous singles.