Three editions of ‘Halo 3’ this fall 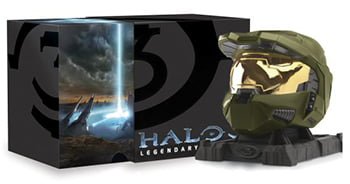 Halo 3 is looking at lot closer this week after Microsoft Game Studios and Bungie Studios announced their plans for three editions of the game, due to hit shelves sometime this fall. Featuring Legendary, Limited, and Standard editions, the game will be exclusively available for the Xbox 360 when it launches.

For $149.99 Canadian you can get the Legendary Edition, which will be very limited and comes in a Spartan helmet case, along with two bonus disks of extras, including behind-the-scenes footage, a “Making of Halo 3” documentary, high-definition featurettes on design and development of the game, and early game concepts. The second bonus disk will include a remastered cinematic material from the previous two Halo titles with developer commentaries, among other things.

And topping off the Legendary Edition is a collection of original Halo 3 storyboard art from artist Lee Wilson.

For those looking for a few extras, but a smaller price tag, the Limited Edition will retail for $79.99 Canadian and will come in a metal collector’s case, the first bonus disk found in the Legendary Edition, plus a special Halo fiction and art book. The book features a guide to the species and factions from the Halo universe.

Finally, if you’re just looking to pick up the game and go you can buy the Standard Edition for $69.99 Canadian, which just includes the game itself.

An official street date should be announced in the coming months. Halo is the Xbox’s biggest title to date, and the franchise is one of the hottest sellers to come out of the gaming industry in years.