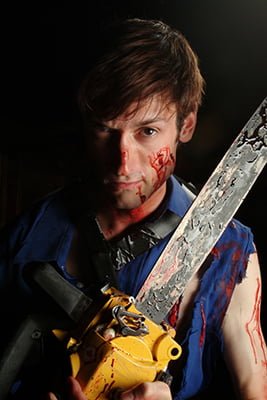 Evil Dead: The Musical is coming back to Toronto, and this time around it’s headed for the Diesel Playhouse starting on Tuesday, May 1st and running until Saturday, June 23rd. Inspired by the cult-classic film by director Sam Raimi, which starred Bruce Campbell as wacko-hero Ash, Evil Dead: The Musical is a hilarious mix of comedy, slapstick horror, and musical theatre.

Much like the film, the story revolves around Ash and his friends as they head off to a secluded cabin in the woods, which turns into a blood bath for the group who have to fight off demons summoned from the Necronomicon. This hearty tale is lifted a few notches in the whole camp department by songs like “All the Men in my Life Keep Getting Killed by Candarian Demons”, “Look Who’s Evil Now” and “Do the Necronomicon”.

The show first came to Toronto in 2004 before heading to Montreal for the Just For Laughs Festival. After that it moved on to New York for an Off-Broadway run that earned it praise from The New York Times and Variety. Co-directed by Christopher Bond and Tony Award winner Hinton Battle, the show stars Ryan Ward as the heroic, chainsaw wielding, Ash.

Tickets go on sale starting this Saturday, March 24th starting at 10:00 AM at the Diesel Playhouse box office (56 Blue Jays Way). If you’re one of the first 100 people at the box office this Saturday then opening night tickets are just $1 (although there’s a rule of one ticket per person). You can also win 10 tickets to opening night if you show up on Saturday dressed as Ash – the best dressed fan of the day wins the tickets.

For more information you can head over to the official website at www.evildeadthemusical.com or call the Diesel box office at 416-971-5656. Tickets start at $17.50 each and go up to $49 each.