2007 CNE kicks off today in Toronto 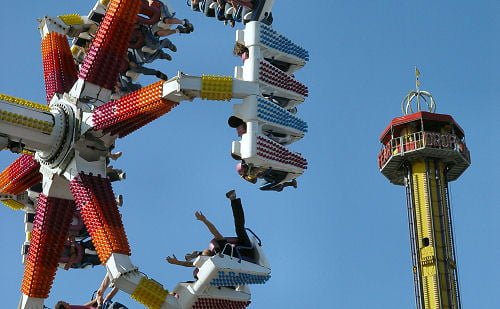 Another summer is almost behind us, and Fall can’t be far away. That’s at least obvious from one of the ultimate signs of the season as the 2007 Canadian National Exhibition kicks off today at 10:00 AM.

Yes, The Ex is back for another year and while it might signal the end of patio season it’s also a great time to see the sights, jump on a ride, and buy a few Tiny Tom donuts on the Midway.

Sprawling over the massive Exhibition Grounds between Strachan Avenue and Dufferin Street, just north of the Lakeshore, the CNE has been presiding over the unofficial end of summer festivities since 1879. And as in the past there are literally hundreds of things to see at the CNE – you just have to decide what you want to do when you get there.

For just $14 ($10 for kids and seniors), the cost of general admission, there are daily exhibits, shows, concerts, parades, games, beer tents, and of course, the food. New this year the CNE also features their very own Ribfest over the opening weekend which also features a “Best Rib Recipe Competition”.

Lego fans can also check out the CNE’s attempt at breaking a World Record with Lego, by building the tallest freestanding structure made of Lego bricks. Engineers from Denmark will be making the attempt starting today and going until Monday, August 20, with the structure on display until the end of the CNE.

While it seems that fireworks won’t be running every night this year, as they have in the past, a new street show called AquarÃªves will be debuting. The show, direct from France, is a mixture of music, aerial acrobatics, laser effects and pyrotechnics that ends with, and I quote, “magical foam”. We’ll just have to hold judgment until we can see that for ourselves.

Over at the Bandshell, a number of performers are lined up starting tomorrow with The Village People at 8:00 PM. Other musicians scheduled include: April Wine on August 18, David Wilcox on August 19, Walter Ostanek on August 23, Sloan on August 25, and ill Scarlett on August 26.

And of course, what would the CNE be without the Air Show on Labour Day weekend? The Air Show runs from September 1 to 3, weather permitting of course, and features a number of jets, planes, and fighters including the Snowbirds.

Stay tuned for more news from The Ex, with more hints on what you can watch for on the CNE grounds.

The 2007 CNE runs from August 17 to September 3, with the gates opening daily at 10:00 AM and closing at Midnight (the casino is open from Noon to 6:00 AM, however). The only exception is Labour Day, the last day of The Ex, when everything starts winding down starting at 8:00 PM.

Check out www.theex.com for more information.