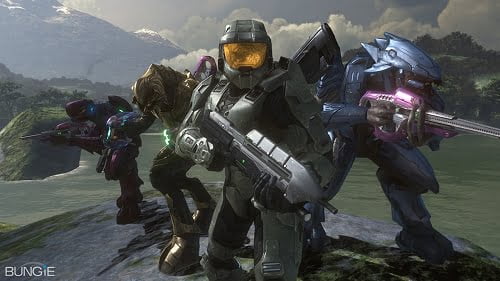 Xbox Canada recently held their big promotional event for the fall season of games in Toronto, dubbed X’07, and amid the chaos media folks got to check out what was going to be the hot titles coming up this holiday. The easy answer: Halo 3.

While gamers have had a while to play with the demo, which was released for about a month starting in May, media didn’t really see anything new during their preview. So far developer Bungie and Microsoft are keeping the storyline secret, so at X’07 the best that can be said was that we had more time to toy with the biggest title coming out this fall. For those who don’t know already, there are a lot of new features coming in Halo 3, including the ability to create custom multiplayer battles (called Forge), numerous new weapons and vehicles, a multiplayer storyline mode that supports up to four players, and the introduction of usable items that either enhance a player or provide a function – for instance, protecting the player or harming someone else.

As much as I’m excited for Halo 3, I think there were a lot of other titles worth looking at this time around. People of course flocked to titles like Rock Band and Guitar Hero 3, and apparently Scene It? was hiding somewhere, but for me the hot title is actually Kingdom Under Fire: Circle of Doom – a stunning looking, action RPG title that I know relatively nothing about. 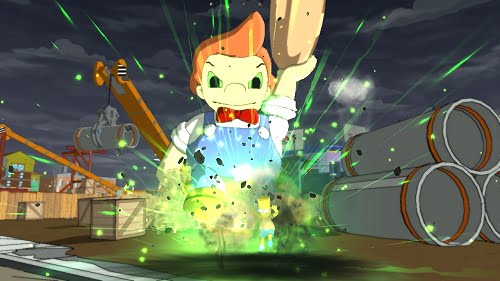 The other huge title for me would have to be The Simpson’s Game by EA. Pretty simple concept – you can play any of the Simpsons, and they each have their own abilities (Bart is of course Bartman and I’m pretty sure he has some sort of radioactive powers, a la Radioactive Man). The game looks simple enough to be crazy addictive and I love how it’s basically like the old, classic arcade titles. The graphics are also perfect – looks almost exactly like you’re watching an episode.

And my other hot picks from X’07? Sure, NHL ’08 looks good, as does Turok, Timeshift, Viking: Battle Of Asgard, Devil May Cry 4 and Lost Odyssey. For me though, two Xbox Live Arcade titles look really, really cool. The first is N+, a simple game that puts you in control of a ninja trying to make his way through increasingly difficult maps. What’s amusing is that the whole game is seen from the side, and you may actually want to let your little guy die since the physics of the death scenes are awesome. You can also build your own levels and share them with your friends. Cool title for sure, and the charm is the fact that it feels so much like an old Atari game that’s been pimped out for the Xbox 360. 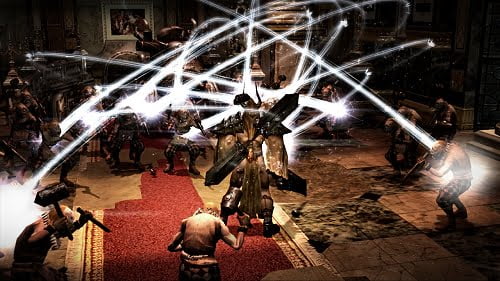 Kingdom Under Fire: Circle of Doom

Finally, I also enjoyed Undertow for Arcade Live, an advanced underwater combat title that has the most stunning graphics. You control a diver and you basically have to kill enemy units while also making your way to each of the bases and taking them over. Your bases will also generate more units that will attempt to move forward and kill the enemies. I’ve heard it features around 15 levels, and you can upgrade your units.

Other than that, the only disappointments for me were that I completely missed seeing Mass Effect and Assassin’s Creed. Apparently they were hidden downstairs somewhere, but I wasn’t even aware there was a downstairs. That I’m still waiting for a solid release date for Fable 2 (the one Xbox 360 title that actually has me salivating for any news). I also heard a rumour that Discs of Tron was headed to the Xbox Live Arcade, but so far I haven’t seen a firm release date and the only real news of it was announced back in May.

Still, X’07 has me sufficiently excited for the next four months, and there’s no doubt that Halo 3 is the game that’s going to steal the show this fall. Fragging season, for Halo 3, officially begins on September 25, 2007.