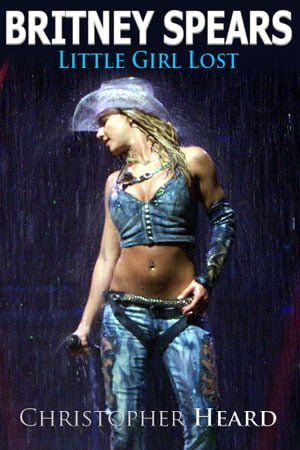 Christopher Heard‘s Britney Spears: Little Girl Lost takes a step back from the woman we have all heard on the radio, and introduces us to the girl who dreamed of being a star. From Spears’ childhood in the small southern town of Kentwood, Louisiana, all the way up to her recent worldwide tour, Heard shows us how this girl, who worked for the spotlight, grew up to be an international superstar who is loved and admired, hounded and mocked.

Heard’s detailed and intimate portrait of the star shows us just how much our view of Spears has been shaped, and then changed, since her debut in 1998. As the star and her handlers have worked to build an image, the media has likewise come up with yet another image, and in Little Girl Lost we finally get a chance to see some glimmer of a truth which lies somewhere in the middle of those two stories.

An engrossing read, which is filled with surprising details, Little Girl Lost is a page-turner that impressed me immediately because of its simple, honest approach to this intriguing woman’s story.

Heard takes us through all of the relevant details in Spears’ steady descent into her well-documented, troubled adulthood. From family issues at home and with her sometimes controlling mother, to suspected drug and alcohol abuse, losing her kids to ex-husband Kevin Federline, and eventually finding some level of stability, Little Girl Lost includes surprising details that even the most ardent fan will find surprising.

As someone who knew a fairly small amount about Spears originally, and perhaps relied too much on the media at large to understand her, I found myself drawn into her story, and caring about each turn in her rather odd tale. Heard draws us into her story not with pity, but with a sympathetic honesty that doesn’t take sides.

Her story is a tragic one though, mainly because she got everything she could have hoped for, and more, and it proved to be too much for her. It’s also hard to pinpoint exactly when things started going wrong for Spears, and Heard makes no attempt to force answers into the book. He instead focuses on the facts, and gives us a broader understanding of how Spears went from being a gymnast, to a Mouseketeer, to the one of the best-selling female acts in the world.

Given the amount of people involved in Spears’ rise to fame, particularly from the age of 16 to today, Heard does an honourable job of avoiding the trash talk that has permeated the Britney Spears story. I also found it refreshing that Heard retells the diva’s story from the very beginning, without skipping over some of the details which frankly show us much more about who she is today.

While a lot of biographies are bought and sold on their secrets, it’s worth noting that Little Girl Lost is a great read not because of the dirt Heard has unearthed, but because he has told the singer’s tale well, and made it a riveting read, not to mention an interesting, cautionary tale.

Frankly, Britney Spears has led such a crazy life so far, it’s hard to imagine there are that many secrets left to tell that haven’t already been dragged through the media.

Whether you read Little Girl Lost to find out more about this “Britney Spears,” or the little girl hiding behind the fame, Heard’s book will simply leave you wondering what can possibly come next for this superstar on the edge of either continued success, or a final fiery crash into an infamous obscurity of her own making.