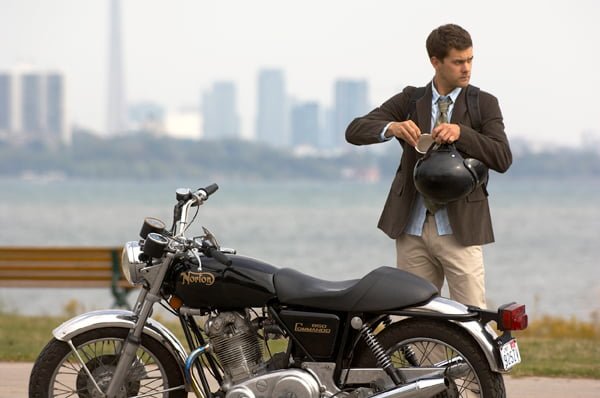 Joshua Jackson in One Week

Arriving this week on DVD and Blu-ray, Joshua Jackson stars as a wayward soul in the drama, One Week. Also out, Jason Voorhees returns to the screen in a glossy remake of Friday the 13th, the first season of the animated Transformers series lands on DVD, plus, Ghostbusters and Dr. Strangelove both come out on Blu-ray.

One Week
Like the film asks, what would you do if you found out you only had one day, or one week, or even one month to live? The question has probably crossed most people’s minds at one time or another, but in this film from director Michael McGowan, we see how one man lives out one week with a postcard tour of Canada.

Joshua Jackson stars as Ben Tyler in this sometimes comic, purely Canadian drama about a young man who goes on a cross-country trip from Ontario to British Columbia after his doctor tells him that he may only have a short time to live.

Leaving his fiancée behind, played by Liane Balaban, Ben examines his life and the world around him as a steady flow of Canadian pop songs plays in the background.

Debuting at last year’s Toronto Film Festival, One Week is a well-acted but admirably aimless drama that gives a stunning view of our country, all to the beat of this charming character’s whims.

It is something of an honest movie, both in the way it looks at life, and the way it shows this country of ours, which is an impressive quality in my books. While the film lacks a true moment of revelation, few Canadian films have ever managed to convey the same sense of wonder in crossing the Canadian landscape.

Jackson also plays this character wonderfully, and his chance meetings along the ride, with a number of interesting characters, make for some of the best moments in the film. My particular favorites being cameos by Gord Downie and Emm Gryner.

Simply put, the film is more about the journey than the destination, and my only big complaint might be with narrator Campbell Scott, who comes across a little overpowering, but contributes a certain mood and sense of place to this colourful story.

Friday the 13th
In this all-too-obvious remake, director Marcus Nispel goes back to Camp Crystal Lake under the watchful eye of producer Michael Bay, all to resurrect a horror legend: the one and only Jason Voorhees.

The problem in remaking this legendary horror film is not so much that it shouldn’t be done, but that it should have been done by talented filmmakers.

Looking at the filmmakers bios gives the first hint of what’s wrong with the film. Nispel’s last screen efforts were the abysmal Pathfinder, and the writers for the project (Damian Shannon and Mark Swift) were responsible for the successful but awful franchise hit, Freddy vs. Jason.

Let’s be honest though. The film was made for a reported $16 million, and audiences are known to eat up anything horror related, promising us even more horrific horror remakes down the road.

Made especially for my generation, who probably watched the cartoon on Saturday mornings in the early 80s, the collection includes all 16 episodes, plus a few meagre extras, like an original public service announcement, and a feature on how the series came to be. The episodes have also been restored quite well to their former glory.

My only complaint would be the lack of any really entertaining features, especially considering that the series has now hit the big screen in a huge way with a second film due next week.

Ghostbusters & Dr. Strangelove [Blu-ray]
Lastly, there are two classics, albeit of completely different sorts, landing on Blu-ray this week.

The first is the iconic 80s action-comedy, Ghostbusters, starring Bill Murray, Dan Aykroyd, Harold Ramis, Ernie Hudson, and Sigourney Weaver. Although I haven’t had a chance to check out the Blu-ray edition of the film, it’s definitely a must-have for any fans with access to an HD television and Blu-ray player.

The second film is Stanley Kubrick’s 1964 classic, Dr. Strangelove, or: How I Learned To Stop Worrying And Love The Bomb. This masterpiece is a touchstone in filmmaking, and stars Sterling Hayden as General Jack D. Ripper, a man with a mission to protect America from Russian infiltrators.

This dark comedy, shot in black and white, also stars Peter Sellers, George C. Scott, Slim Pickens, and Keenan Wynn. If you haven’t seen the film in a while, check it out on Blu-ray, and for a new generation, it’s worth a look if for no other reason to witness one of the last century’s greatest filmmakers in his prime.