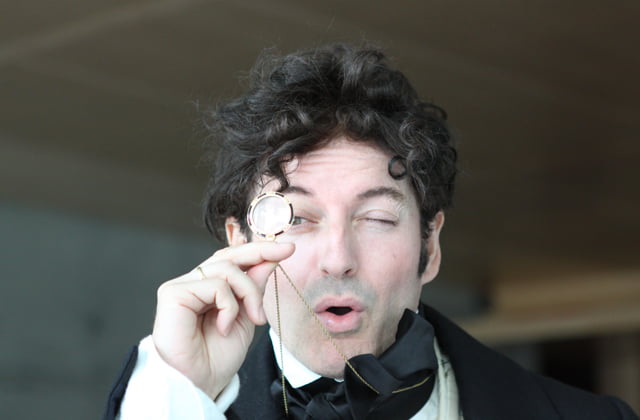 On the stage is a large red chair. It is big by any standards. It is meant to dwarf a relatively tall man in 6′ 1″ Richard Hanna to make him look 4′ 8″. As I said it is a very large chair. It also has the fringe benefit of giving him access to his harp.

“Though all the world betrays thee; One sword, at least, thy rights shall guard; One faithful harp shall praise thee,” Thomas Moore wrote in The Minstrel Boy. Moore was many things including an Irish patriot, a member of English high society, and a friend of the Prince Regent. He was also stubborn, proud and short. He was 4′ 8″ to be precise.

Hanna uses Moore as the inspiration for his play Melody Moore, which re-examines the role that Moore played in history and how he balanced his many often seemingly contradictory roles in British society.

In the first part of the 19th century several of Moore’s close friends were executed by the crown for treason. Moore chose these roles strategically knowing that he could do more damage from the inside than from the outside. He also didn’t want to be hanged.

“Moore realized that violence was not gonna work so what he did is he kind of cracked British high society so he got himself into a position of high rank and became this huge star and then he started to slyly propagandise for the Irish cause through song,” Hanna tells me as we talk at Festival Hall the venue for his show. “Instead of naming England, which would’ve got him hung he kind of went back in time to when the Danes or the Saxons were the invaders and sung about the Danes and the Saxons when he was really meaning the British.”

The play examines how through the power of song Moore managed to get the Brits to like his protest songs. He was a romantic poet and these songs fit perfectly with the trends of the time.

“The irony of course was that the British took to these songs like duck to water. They loved these songs they were romantic,” says Hanna. “They didn’t really get it that Moore was kind of laughing behind their back for a very very long time.”

The downside of attacking the British from the inside was that the Irish thought he had abandoned the cause. The British eventually clued into the fact that he was making fun of them. As a result neither side could claim him as their own. Hanna reflects that this complexity is why he has largely been white washed from history.

“He deserves to have another look at from a modern audience,” says Hanna. “Moore is an incredibly modern character. In a very sharply defined age when you could only be one thing, you can be this or you can be that, Moore was an Irish patriot, an English romantic poet, a European so many things that were seemingly contradictive in nature.”

Then there’s the matter of height and personality. Moore was short and charming. As a result he was often underestimated.

“Through this enormous charm, and he was only 4.8′ so he had this disarming upward regard to people and he was incredibly precocious and always looked like he was 15 years younger than he actually was so he looked kind of harmless even though he wasn’t because his pen was poison,” says Hanna.

One of the best examples of this is when Moore fell out with the Prince Regent (King George the Fourth) and Moore scrutinized and attacked him every chance he got.

“The image we have of King George the Fourth today of that sort of gluttonous despot is due mostly to Moore,” observes Hanna. “Moore said roast him in the press at every opportunity. There wasn’t one move he could make without Moore creatonizing it or mocking it.”

The other appeal of a show like this is that Hanna plays all 17 characters including Moore, Lord Byron, William Wordsworth, King George the Fourth and several old ladies.

“There was a lot of old ladies in Moore’s life and they’ve based on actors and actresses that I admire like Alan Rickman, Maggie Smith, Geraldine McEwan,” says Hanna. “When I wrote the play I thought who would I cast in this role? Who would I cast as Lady Donegal oh easy Maggie Smith should play that so I’m putting a bit of Maggie Smithisms into the character and that helps just to make it a bit more fun and helps to delineate the characters as well, delineate a little bit more idiosyncratic.”

Hanna has a lovely almost British accent but is really more of a mix. His father is Irish and his mother is Scottish. He was born in Malaysia but was raised in New Zealand. He attended drama school in London and now lives in Ottawa with his wife.

“I’m used to travelling around and I love it,” remarks Hanna, “Travelling from town to town as a performer is such a strange thing in a way because here you are the kind of tourist but you’ve become part of the cultural life of the town so people come to visit you so it’s a kind of push me pull you situation.”