The tales have been told, the live action movies wrapped, but Star Wars fans have a new adventure to look forward to as George Lucas launches his latest spin-off, The Clone Wars.

Set between the second and third prequels, Star Wars: The Clone Wars is an animated adventure featuring some of the most popular characters from the original films and voiced by some of the best names in the animated business. In the upcoming movie, and the new television series that arrives this fall, there is one notable new face, and her name is Ahsoka Tano.

Voiced by the lovely Ashley Eckstein, Ahsoka is a feisty young Padawan sent to learn from Anakin Skywalker during the heated war against Count Dooku and his cohorts.

I had a chance to chat with Ashley about her role, and what fans can come to expect from Ahsoka in the upcoming series.

Q: You have quite the interesting character…
“I do, Ahsoka is definitely very kick butt. She’s the first female Jedi to really be focused on and I love the girl power that she brings to Star Wars. Especially to young girls.”

Q: Did you draw on anything in particular for the part?
“Growing up I was definitely a huge tomboy. I had another brother and I wanted to be just like him.”

“So I definitely feel that growing up I wanted to prove to the boys, because of my older brother, that I could hang with them. So I think that I had that in the back of my mind. And then also, my parents always instilled in me, for as long as I can remember, that you can achieve anything as long as you put your mind to it and stay positive and stay optimistic.”

“It’s like they never told me no, you can’t achieve that. I never heard that. It was always, well sure, you can do that. Why not?”

“So, I think having that instilled in my head was very much what I tried to bring to Ahsoka because that’s who she is. She is out to prove herself and she’s not going to let anybody not accept her, she is going to prove that she’s there for a reason. And she has to have that optimistic positive attitude and so I tried to bring that to her.”

“On the flip side, Ahsoka has made a difference in me, in my everyday life because, yes there’s hard times and when things get you down it’s frustrating, but I realized that you can’t have that give-up attitude. Okay, well, times are tough, or plan A didn’t work, so let’s go to plan B. That’s just how I focused in, so I continue to take that in my everyday life.”

Q: Was joining the whole Star Wars universe daunting for you?
“It was definitely daunting. I didn’t know I had booked the role of Ahsoka when I booked it. I knew that I was playing a new character, but I didn’t know who she was or what she did until I showed up for the first session.”

“I had seen all of the movies and I definitely was a Star Wars fan, but I didn’t know about the whole expanded universe. That’s why I kind of describe myself as [director] Dave [Filoni]’s Padawan because every session I go into I learn so much. I try to suck in as much knowledge as I can from him because I want to be a true fan. I want to know the history and the background of everybody.”

“As I’ve been telling fans, be patient, I’m learning.”

Q: Did you get to work with the other actors? A lot of times I know it’s quite separate.
“True, but not for us. From the very beginning they tried to establish cast recordings and it was tough because some of the other actors are very accomplished voice actors. I mean we’ve got James Taylor, who is the voice of Fred Flintstone, standing to my right. Dee Baker, who is the voice of all of the animals from Avatar [Avatar: The Last Airbender], to my left. They’re just such accomplished actors and, then Tom Kane and everything that he’s done.”

“I don’t think we would have achieved the relationships for the characters that we did so quickly had we not been in the same room. Even Matt Lanter and I, who does Anakin, we definitely got the brother and sister relationship that Anakin and Ahsoka have down pat even off camera just because we were able to work together. It really helps to be standing next to the person talking to them versus talking to a blank wall.”

Q: What did you know about the film, and the series when you first got involved?
“The funny thing is that I find out a lot of the things that are happening with the Clone Wars through the fans online. At this point, now that I can say who I’m playing, fans may think that I hold all of this information, but hey, I don’t. Your guess is as good as mine.”

You can also catch Ashley in Alice Upside Down, which she calls a “feel good positive family film,” with Penny Marshall. You might also see her at a stadium or two as she supports baseball hubby David Eckstein, who plays for the Toronto Blue Jays. 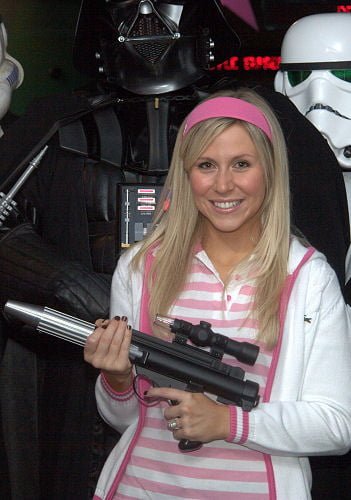