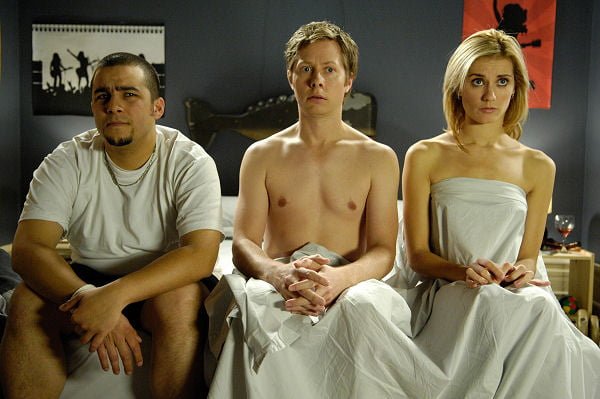 First, there’s The Couple, with Kristin Booth as Abby and Josh Dean as Andrew. They are trying to find a way to spice up their love life, but they don’t quite realize how bad things have become, and Andrew might be surprised by the solution.

With The Friends, Aaron Abrams is Matt and Carly Pope is Kris, two lifelong buddies exploring their relationship in each other’s arms, but their plan to keep it just about the sex gets complicated when emotions leap into the mix.

Looking in at The Exes, Sonja Bennett is Mia and Josh Cooke plays Eric, a former couple who hooks up again for fun, but can’t seem to ever be completely honest about their feelings.

The First Date stars Callum Blue as Ken the lady killer, out for a date with the naive Jamie, played by Diora Baird. It may take some time, but over the course of the night they will finally open up and reveal their secrets to each other.

Given the title alone, this is obviously the kind of film that likes to push buttons, but the hot cast is put to great use beyond exposing their fair share of skin. Young People Fucking is an undeniably great drama, with excellent performances from this clever, sexy cast.

The film opens in theatres on June 13. Visit the official website at www.ypfthemovie.com.