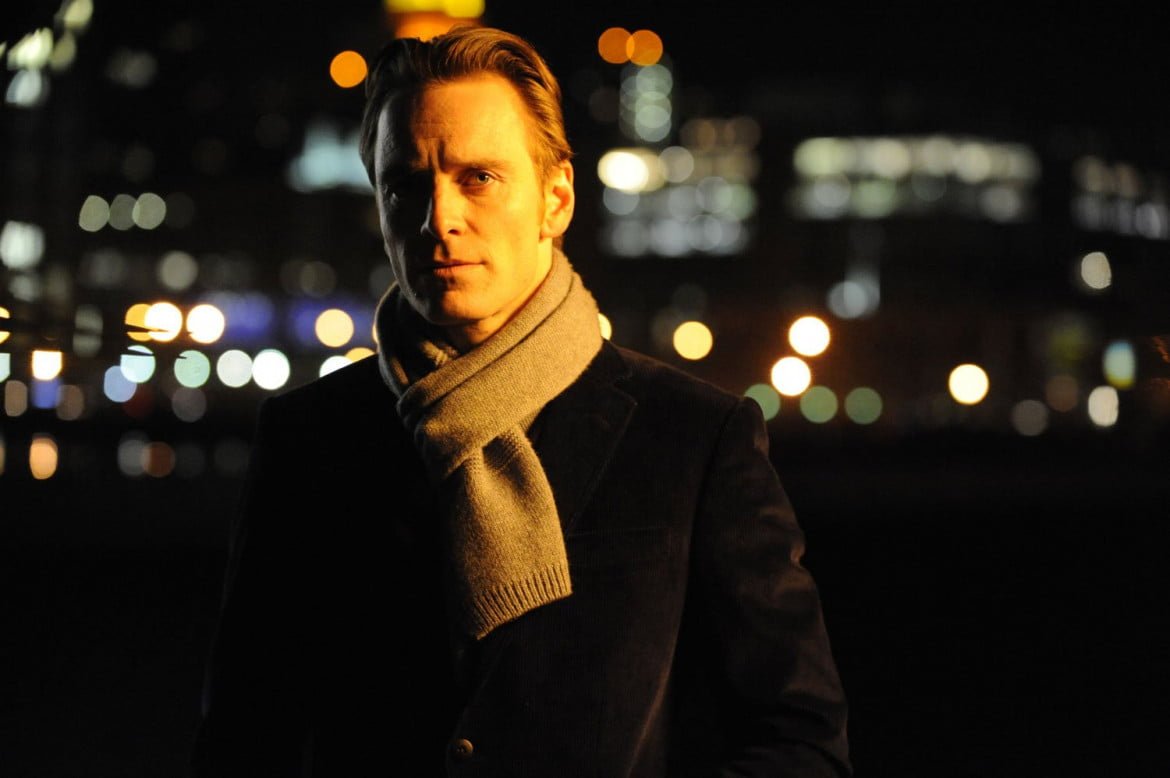 Michael Fassbender stars in director Steve McQueen’s Shame, a fierce drama about a man with an addiction to sex that is spiraling his life down into claustrophobic loneliness.

During the 2011 Toronto International Film Festival, where the film made its North American debut, the confident and yet moderately self-deprecating actor chatted with the press about making this explicit film, why it was an important role for him, and his view on today’s pervasive sexuality.

Journalist: Did you have any trepidation in taking this role due to the fact that you’re being seen as a sex symbol and playing a sex addict?

Fassbender: “No, because my job is to be an actor and I try to not be a sort of brand as much as I can, you know, and like, ‘What’s good for my image’ or all that bullshit doesn’t interest me. I’m there to tell stories and go places and… to provoke thought and questions and have an audience take this journey vicariously with this character. In order to do that I need to go to places where such questions would seem ridiculous to me, in that respect.”

Journalist: Sometimes I felt total empathy for him, and sometimes he was a bit of a predator.

Journalist: Do you have sort of a split concept of him?

Fassbender: “Well, that’s again when you want to bring somebody to the table that’s real, and not in any way are you trying to flower around the character, or worry that ‘Oh, is the audience going to like him?'”

“I knew that they would like him because I liked him, and because he was a guy that knew that he was ill. It’s not like he was just going about his business, sort of damn the consequences. No, he’s somebody who doesn’t like himself. You know, he’s got a very low opinion of himself, so therefore he goes about abusing himself in such a way. And I wanted him to be repulsive, and then I wanted him to be vulnerable, and I wanted him to be all those things, so that he would be sort of real, you know? And that people would sort of go, ‘God, I recognize that,’ or, ‘There’s elements of that in me,’ and maybe that he’s not one hundred miles away from us, and the fact that he is a product of our time. I wanted to sort of embody all of those things.”

Fassbender: “Yeah, he is. There’s no relationship that he has with anybody in the story that’s a healthy one. Not with his boss, not with his sister, not with any of his sexual partners; it’s an isolated sort of existence that he’s living when on the front it’s like, ‘oh, here’s a successful guy, everything’s cool,’ and it’s so far from the truth.”

“He just can’t allow himself to invest in other people. That danger of intimacy, or emotional responsibility, it’s too much for him, so when his sister comes and even her hugging him, that’s not a place that he can go to–it’s not a place where he feels safe and secure. So, therefore, he has these very sort of physical relationships but without any form of intimacy. The one moment where we think he might be able to find it with the girl at work, Mary-Ann, he just can’t handle it. It’s overwhelming–frightening… you’re all like, ‘What am I going to have for lunch today?’ [Laughs]”

Journalist: You’ve done two very different types of films between Shame and A Dangerous Method. Which character was tougher to play?

Fassbender: “You know, I think I’ve got to say that Shame was the tougher job just because A Dangerous Method was two jobs beforehand. I was fresher. Having come from quite a few jobs by the time I got to Shame, I was kind of tired and then it was so intense in the five-week period, and I did go to these places, sort of, without any masks, or without any sort of exterior to hide behind, if you like. So, I guess, at certain points, I was thinking I was going a little bit crazy and then that it was probably time for me to take a break soon. But both were good fun as well, exploring and sort of finding these characters and trying to find out what makes them tick and where they’re coming from and all that.”

Journalist: The film was recently acquired by Fox Searchlight, and that’s ignited a debate about whether the film can be cut to bring it down to an ‘R’ rating instead of an ‘NC-17’…

Fassbender: “Good luck. Good luck trying to convince Steve McQueen to do that.”

Journalist: I’m curious, what’s your take on the ‘NC-17’ rating since most directors in the United States seem completely frightened of it.

Fassbender: “You know, I don’t know. I think it can be a good thing, because people talk about it… the most important thing is people talking about it. That creates curiosity.”

“I don’t know what happened to Reservoir Dogs here when Quentin [Tarantino] released it, but in England it got some sort of ban that sort of put more buns in the seats in the end. So, I don’t know. I don’t know how people sort of choose to make these ratings. All I know is that everywhere I look on the street or in terms of me buying breakfast cereal or a soda drink that sex is being sold to me in every single way.”

“You know, I’m at the airport and I see these big billboards with this girl in lingerie, and it’s everywhere and people aren’t dealing with it, and we’re trying to deal and it’s a real, and honest, and intelligent way here in this film and Steve has really done that and made us question what our moral compass is on this and how we feel about it and how we’re actually relating to each other in physical form as well as emotionally, and we’re losing that intimacy. And the fact that porn is so widespread and it’s such a fast and increasing phenomenon. I think it was the first– and I could be wrong–websites to be making on the internet. So, it’s there, and whatever rating people want to slap on it is kind of irrelevant I think.”

“The fact of the matter is that I knew when I felt comfortable doing the scenes with Steve because I knew that it wouldn’t be exploitative, the sex scenes, and I knew that they wouldn’t be titillating and all the usual shit that we see when sex scenes are in films. It’s real–it’s part of the story–it’s part of getting into this guy’s head and where he’s coming from.”

Journalist: What kind of director is Steve McQueen?

Fassbender: “What kind of director? A good one.”

“No, I don’t know. He’s a very collaborative person. I mean, the one thing that really impressed me when we were in Northern Ireland doing The Hunger was the passion that every person came to set with. I’m talking about the carpenters, the prop guys, wardrobe, makeup, camera department; everybody came to set with so much passion and this idea that they didn’t want to let Steve down, and I thought, ‘God, that’s really impressive,’ and then I thought, ‘Okay, well, we’re making a film here that’s very sort of relatable to the area, and there’s a lot of local people, and everybody’s got a history with the troubles in Northern Ireland, let’s see what happens in the next one.’ I was sort of wondering what’s going to happen in New York, you know, and again, the same [focus] in New York. He leads by example.”

Journalist: Some people will find this movie shocking, do you think you needed to be this exposed and vulnerable for this character to really work?

Fassbender: “Well, yeah. It’s interesting. Everyone sort of talks about like, you can take somebody’s head off with a cheese cutter, but heaven forbid that you should show a penis. That’s seems so ludicrous to me, and ridiculous. And, you know, it’s nice as well for sort of, women for a change, to see guys exposed.”

“You know, usually it’s the woman who is walking around naked while the guy conveniently has his pants on. For number one, I thought it was kind of cool that we were doing that, and the other thing as well is that, I don’t feel that at any point, like I said, that it’s exploitative or titillating. I do think we need to go there. Whether that means that he gets up out of the bed naked at the beginning, and we see him in his environment and we see that his body is sort of very much a part of his own downfall. Then, I think it’s important, but, again, I didn’t really think about it too much to be honest… I trust [Steve] so implicitly.”

Fassbender: “Yeah, of course. ‘You looked like you were having a gay old time.'” [Laughs]

“Yeah, you know, you feel silly. You’re taking your clothes off in front of strangers–well, soon you get to know them, pretty quickly. I suppose the toughest thing is making sure that your partner in the scene feels comfortable and that they don’t feel like they’re being taken advantage of, and so you try to create a relaxed atmosphere and make sure that you’re not stepping over their boundaries, and you understand what the boundaries are so you can get on with it.”

Andrew Powell: You’ve done some amazing dramatic work, you’ve tackled some Hollywood big-budget work, where would you like to go down the road? What do you want to do with your career going forward?

Fassbender: “The way it is at the moment is pretty perfect for me. I get to work with great filmmakers, and that’s it. That’s as simple as it gets for me, whether it’s Hollywood or Bollywood, or anything like that. It doesn’t matter. Obviously, you know, there is Hollywood sort of studio films in there, and it was important for me to do a studio film, and it was then a case of finding the right one and one that I thought that all the ingredients were the right ingredients, as much as you can preempt anything like that. But to just sort of mix it up, keep myself guessing and everybody else.”

AP: Then I have to ask about the rumour that you could be the next James Bond. Would you want to be the next Bond?

Fassbender: “Hey, listen, I’d be lying to you if I didn’t say to you that I’ve walked around the house sort of humming the tune to myself at various stages of my life. So, you know, that would be obviously very flattering that people have said this, but I think Daniel [Craig] is doing a great job… I try not to plan anything, I don’t think too far ahead, so I’ll play it by ear.”