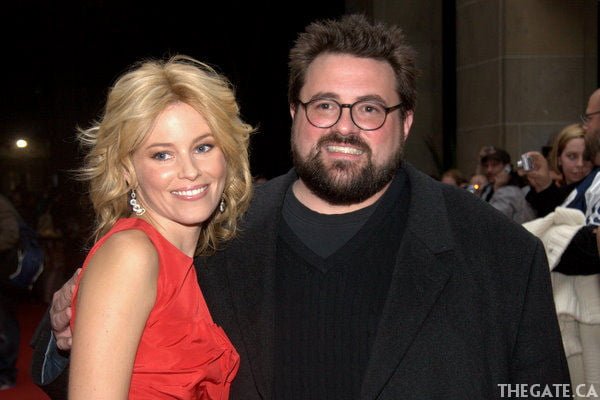 Co-starring Smith’s best friend and frequent star, Jason Mewes, plus Craig Robinson, and with appearances by Justin Long, Traci Lords, and Brandon Routh, the film is hilarious and sweet. It’s also patently obscene, at least in terms of dialogue, but that shouldn’t surprise anyone who loves Smith’s work.

With the idea rattling around in Smith’s head for the past decade, it wasn’t until he had seen Seth Rogen in 40-Year-Old Virgin that he decided he was going to write a script.

“Then when I finished the script and tried to give it to Seth it was two weeks before Knocked Up opened up and I was seeing him on billboards all over town. I was like, ‘Oh, I’ve missed my window. This dude’s fucking famous now.'”

As it turned out though, Rogen was a big fan of Smith’s work, and went so far as to tell Smith that when he originally went to the U.S. to act, he wanted to be in a Kevin Smith film someday.

The question is quickly raised though, how does Smith feel about Judd Apatow? It’s hard to imagine Apatow’s films doing well without the ground work that Smith did with films like Clerks, or Mallrats, and yet Apatow has had commercial success that Smith has yet to attain.

“We’ve been making dirty movies that have heart, or sentimental movies that are also really raunchy, since 1994,” he said. “And I always felt like you can only make $30 million on a movie like that, because that’s all we ever did.”

That’s why Smith gives Apatow credit for breaking the proverbial “glass ceiling,” as it were, for that type of film.

Working with Rogen though, who has made a number of films with Apatow, was still a bit weird Smith said. “It’s kind of like going to dinner with your girlfriend’s ex-boyfriend, so to speak, even though they’re not broken up. But it was just kind of like, ‘Which one of us fucks better, do you think?'”

Despite the changes in the industry, with films like Superbad grossing well over $150 million, Smith is unconcerned how well Zack and Miri does at the box office.

“Ultimately, look, I don’t think the movie’s going to do as well as Knocked Up has done, so I think I’m safe from the curse of mainstream success. I might be able to go to the mall still,” he jokes. “But I don’t know, I’ve never really thought about Indie versus mainstream, or cult filmmaker versus mainstream because that’s kind of like a concept that exists within this room and in the industry, but in the real world, you make a movie and people are like, ‘Oh, I’ve seen it. It was funny.’ They don’t go, ‘How much did it make?'”

Smith even pointed to an interview Rogen had with AP, where Rogen said how much he loved Clerks growing up, but he had no idea it didn’t make any money.

“I don’t think it’ll be anything I have to worry about in terms of insane commercial success. That would be amazing if it was. If [Zack and Miri] made like, 80 million bucks my head would explode. My head would utterly explode. I don’t think I’d work again. Because I’d be like, ‘It’ll never better than this. Goodbye everybody.'”

“I’d do the Jim Cameron for real,” he says with a smile. “Cameron hasn’t made a movie since Titanic, because why bother? Now he’s making Avatar, but it took him a long time to get around to it.”

I ask Smith if he thinks the MPAA is really representing the American people by banning such a simple poster.

Speaking of distasteful, there’s the whole matter of Jason Mewes’ nude scene, which is one of the rare bits of nudity in the film. Considering what most people know of Mewes, from Smith’s public appearances, it would seem an easy matter to get Mewes nude on-screen, but there was a bit of a challenge involved.

“If you had asked me before I asked him,” Smith says with a smile, “I would have been like, ‘Come on, this is a dude who pulls his cock out after five minutes if you’ve known him.'”

“I’ve seen Jason Mewes’ dick more than I’ve seen my own, which either says a lot about Jason or very bad things about how big my gut is. But when I first asked him he was like, ‘I don’t know dude.'”

The problem was that Mewes was all too willing to drop trow off-camera, but as Smith paraphrased, “‘This is different man. It lives forever, it goes on DVD. And what if chicks see it?'”

So, Smith ended up convincing Mewes with a bit of a bribe, offering to clear any debts Mewes owed him if he went nude in the film.

“And once he shot it, you couldn’t get his clothes back on,” Smith said. “Like, once it was exposed, he was like, ‘This is comfortable.’ He would walk around with a sock with a rubber-band tied around it, around his dick. Bare-assed around the set and what-not.”

With our time almost up, Smith finished up talking about his next film, Red State, which will be Smith’s first attempt at horror, in a story about fundamentalism taken to total extreme in Middle America.

Smith considers it a real test of his filmmaking skills, unlike slasher-style films, which he says are easy to do.

“True horror,” he says, “like repelling somebody, really terrifying them down to their bones, and making them think, that takes true talent. And I don’t know if I have enough talent to pull it off, but I’m gonna give it a shot.”