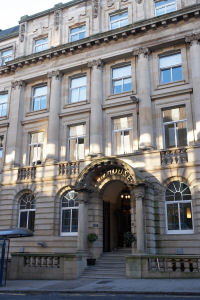 In a city the size of Glasgow it would be easy to get lost among the restaurants. There are dozens of famous eateries in the city and picking one among the crowd can be a bit daunting. It becomes much easier however when you discover a chef like Michael Caines.

Normally, I don’t think much about chefs, or the people behind the swinging doors at any restaurant. I worked in a number of kitchens over the years, so I know a little about what it takes to make a great dish, but I have to admit that Caines’ reputation piqued my interest. As a renowned chef, and an award winning one at that, Caines was featured (and nearly won) BBC television’s Great British Menu competition, and just last year he was recognized as a Member of the Order of the British Empire.

Since the opportunity had presented itself to visit the ABode Hotel in Glasgow, which features a Michael Caines Restaurant, it seemed like a great chance to see what he had to offer.

My companion and I were the first people in the restaurant that night, but it filled very quickly. While the menu is actually rather short, it’s also a clever blend of choices, with an excellent range of dishes including roast rump of lamb, vegetable lasagne, Loch Duart salmon, and a special tasting menu based on Caines’ menu for the BBC TV show. Practically everything on the menu jumped out at me, but we both decided to try the Scottish sirloin steak from the a la carte menu, which featured fondant potato, mushrooms a la crème and Madeira sauce.

Leading up to our main dish we were treated to a delicious amuse-bouche of crab wonton canapes, followed by celeriac veloute with white truffle oil served in a perfect little espresso cup. These little touches in presentation and flavour made the entire meal perfect, but I have to admit I was almost more impressed at this point by the service. At some restaurants the waiters seem to hover nearby, but at Michael Caines it just felt like they were there exactly when they were needed. One second we would finish with an amuse-bouche and someone would appear and clear the dishes and bring us the next selection. 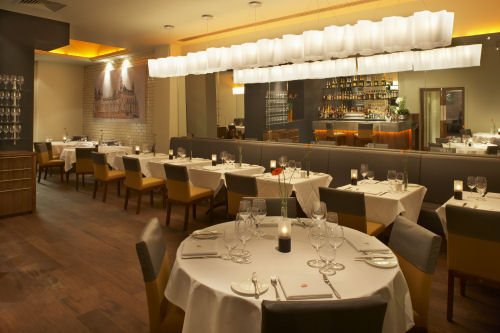 Regardless of the restaurant or the staff however it’s definitely the food that earned all the points for me. Restaurant atmosphere can help a meal a lot, but I honestly couldn’t tell you as much about the room as I could about the dishes. When the steak arrived it was almost like cutting into butter, but it was wonderfully lean, and the accents from the potato, Madeira sauce, and mushrooms were perfectly matched.

Likewise the rhubarb amuse-bouche, with vanilla syrup, ginger and pink peppercorn revitalized the taste buds for the delicious deserts, and yet another amuse-bouche, which included a number of truffles. For desert we ordered the milk chocolate mousse with hazelnuts and Gianduja ice cream, and it was beyond perfect. The mousse was sweet, but not too intense, and vanished the moment you put it on your tongue. Mixed with the hazelnuts and ice cream it was about as close to desert heaven as I could ask.

Despite the numerous amuse-bouches, the delicious main course, the desert, and even the fact that we had bread to begin with, I walked away from Michael Caines full, but not feeling uncomfortably full. Each course, and the accompanying treats, were ideal. Food quantity may not be a minor point to make, but combined with the service, the overall perfect presentation of the meal, and the exemplary food itself, it made Michael Caines stand out as one of my favorite restaurants I’ve ever had the pleasure of enjoying.

As you can probably tell, I’m a newly minted fan of Michael Caines and his accolades seem more than well deserved. Just plan on booking a reservation well in advance for this hot spot as space is likely limited since I can imagine it getting a bit busy what with the numerous awards the restaurant has won over the past year, including EatScotland’s 2007 Gold Award, and Executive Chef Martin Donnelly also won the Medaille D’Or for Outstanding Cuisine.