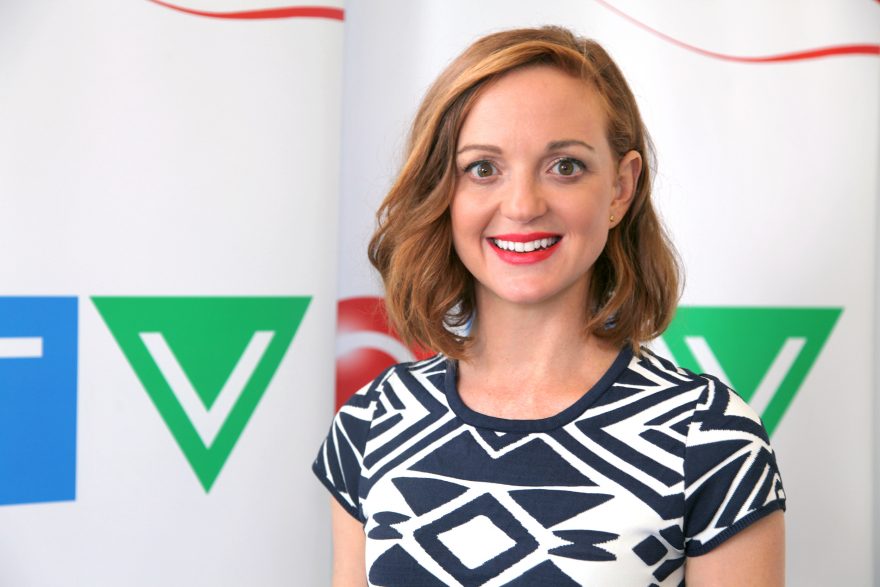 Jayma Mays is as friendly in person as you would expect. Mays is inviting and it seems like she is always smiling, and despite having a long day of interviews while she was visiting Toronto, she was in a great mood when I met her to talk about the second season of The Millers.

Watch the video interview below, and read on to find out what she had to say about working on The Millers with her very funny co-stars.

Question: I love your cast. The people you work with seem like so much fun. What’s it like when you are all on set together?

Jayma Mays: “They are the best, and thank-you for saying that because I love my cast too–our cast–I shouldn’t say mine like I own it. They’re great on set.”

“First of all, they’re so talented–I’m surrounded by incredibly talented people. But, also, I feel like we’re becoming a little family too, and it’s so cliche to say that–and you hear actors say that a lot about the cast that they’re with–but it’s so true. You spend a lot of time together and we’re playing the roles of mom, dad, sister, brother, and I inevitably think that’s kind of happening on set too.”

“I definitely am sure that I’m the annoying little sister on set–I’m sure.”

Q: When you and Will Arnett are acting together, did you find that the brother and sister relationship come easily to you, or did you have to work on it?

Mays: “Sometimes I think things are easier than others, or there’s chemistry, or there’s not, and I feel like we fell into brother/sister mode pretty quickly. Mainly because he’s incredibly annoying [laughs]. No, he’s amazing, obviously.”

“But, yeah, I think for some reason we kind of pick on each other, you know, and I do kind of think that he’s that golden boy older brother sometimes that everyone loves. And I think that we’ve stepped into those roles maybe a little bit–a little bit.”

Q: I could see that in the first season. The chemistry between you two–it seemed to me like it was a good fit early on.

Mays: “Yeah. I don’t know what his family is like, so I can’t speak for him, but my family is like that. We pick on each other because we like you, you know? I pick on my brother because I like him–I love him. You know, he’s my brother. So I think that if you come from a family like that, and that’s your background, maybe it comes a little bit easier, to kind of step into those roles. But those roles are written that way, and they’re written so well that way that it lends itself to that, so it’s fun.”

Q: Other actors have always said that each season tends to feel different from the last because so much changes. What has the second season of The Millers been like?

Mays: “For me, I was incredibly nervous the whole first season, because this is a new genre for me. Doing a live audience [comedy], it was kind of like theatre in a way, and I hadn’t done a lot of theatre, so, for me, I was incredibly nervous. I was having fun, but I was nervous and feeling like I was learning a skill. I still feel like I’m learning this new skill–it’s something I don’t have in my back pocket–but I feel a little bit more comfortable and it was exciting to come back with a cast that you enjoy so much to work with.”

“But also, we’ve added a new cast member. We have Sean Hayes in the show now, and he’s so fun and wonderful, and the set was from before, but it’s even more jovial that it was. He’s just a light. He’s just a wonderful talent and a light, and such a generous, kind person that he’s added this whole other wonderful element to the show.”