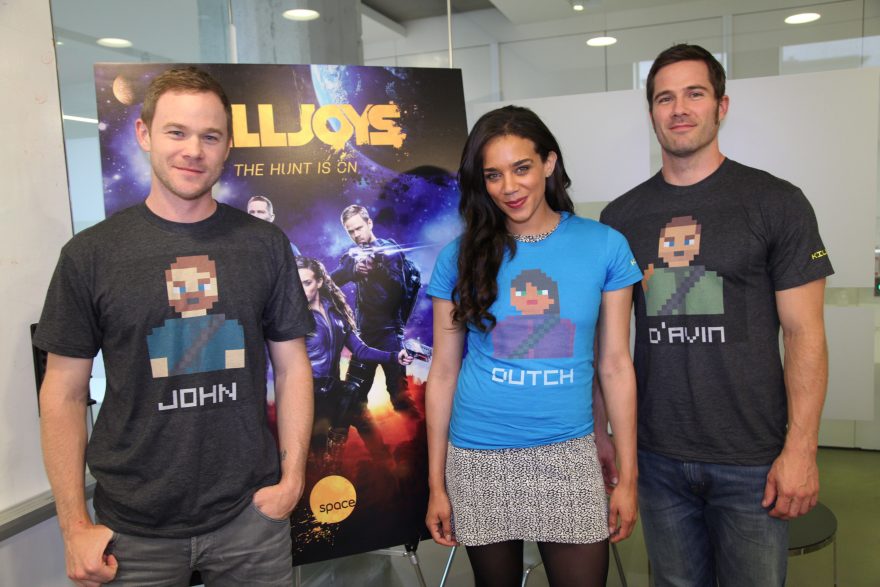 Are you ready for the finale of Killjoys on Space this Friday, August 21? If not, how about a little interview with the show’s trio of stars to get you ready?

Stars Hannah John-Kamen, Aaron Ashmore, and Luke MacFarlane sat down earlier this summer, ahead of the show’s premiere, to talk about the characters, the mood of the show, and the universe where the Killjoys have to make a living hunting down warrants.

They also revealed a little bit about what drives the characters, and their fearless boss, Dutch, played by Hannah John-Kamen, not to mention a little bit about the show’s stunts, a little injury during filming, and then they each introduced one of the other characters from the show.

Watch the interview below, and scroll down to read bios on each of the characters. To catch up on Killyjoys, head over to space.ca to watch full episodes.

DUTCH: Level 5 (Hannah John-Kamen)
“Gorgeous, complicated, and deadly, Dutch is the leader of the Killjoy trio. A top-level Killjoy with serious combat skills, Dutch is a much-loved and a charming presence in her community, with a unique gift for earning people’s trust and respect regardless of their class. While bold and fun-loving on the surface, under her banter and protective flirtations there is maturity, pain, and a deep solemnity resulting from a dark secret past.”

JOHNNY JAQOBIS: Level 3 (Aaron Ashmore)
“A Level 3 Killjoy and Dutch’s long-time partner, John is a peacemaker who hates conflict, despite his profession. Cheerful and kind-hearted, John prefers not to fight, but his sarcastic wit has put him into the fray often enough to teach him how to do it well. As the team’s resident mechanic and pilot, John can fix, build, and fly any machine.”

D’AVIN JAQOBIS (Luke MacFarlane)
“John’s older brother, D’avin is many things: handsome, strong, sarcastic, and loyal, but above all, he is a born soldier. As the team’s newest addition, he brings a hard-won expertise in tactics and hand-to-hand combat. But what Dutch and John don’t know is that D’avin left the military under mysterious circumstances, and he’s come to The Quad to square his unfinished business with some potentially dangerous people.”

LUCY (Voiced by Tamsen McDonough)
“Lucy is a small private ship with a distinct personality, who has ties to the Killjoys back to the day that Dutch and John first met. She has served them well ever since, and while not one to play favourites, Lucy often demonstrates a distinct fondness for John. Comprised of a small cockpit, Spartan sleeping quarters, and a lounge area, Lucy provides the team with interplanetary transportation, as well as a private work/live space.”