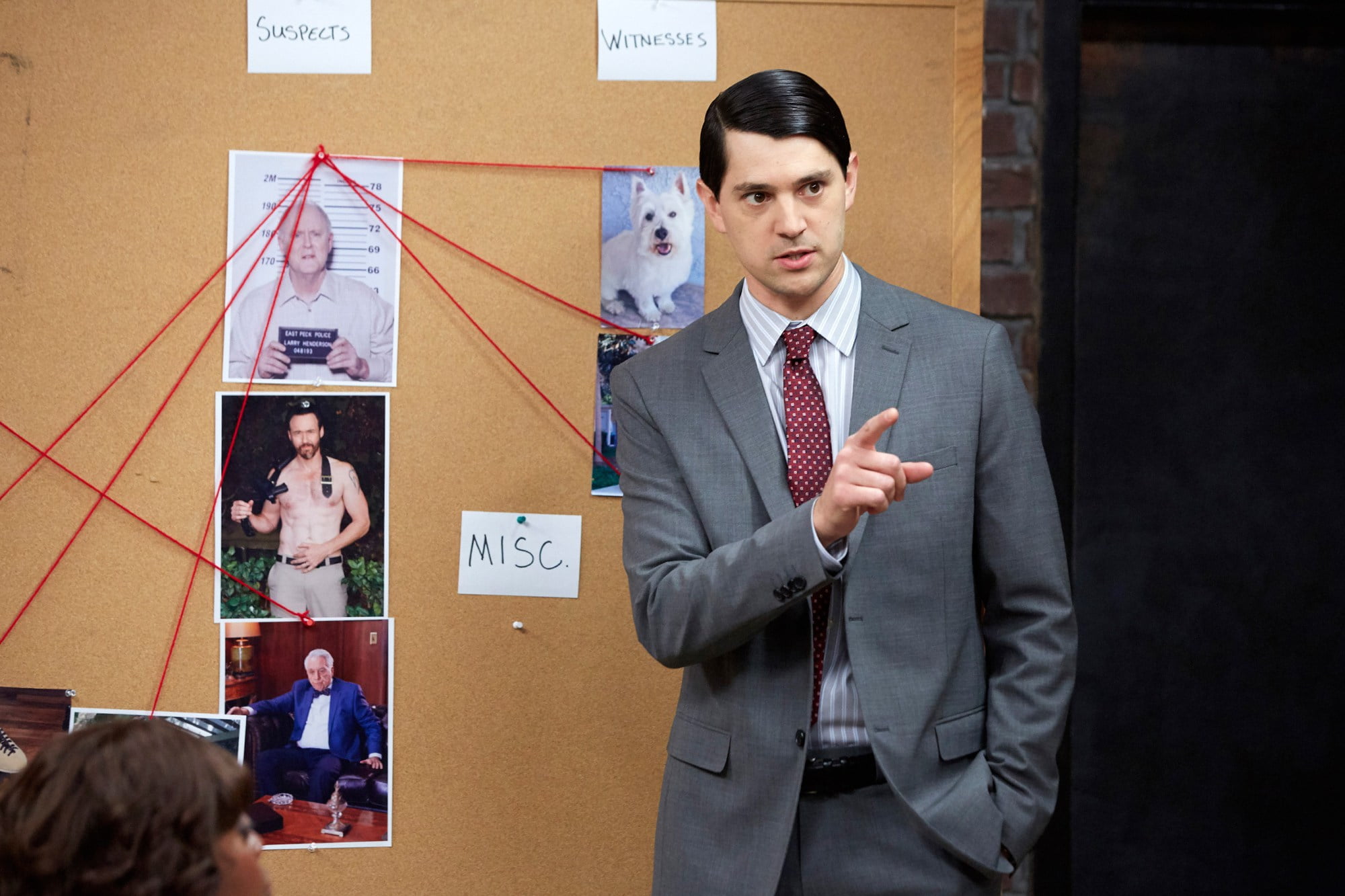 Murder has never been funnier than in NBC’s Trial & Error. The series follows Nicholas D’Agosto as Josh, an eager New York defense lawyer who ventures to the small Southern of East Peck Hill for his first case. Could beloved and eccentric poetry professor, Larry Henderson (John Lithgow), who constantly incriminates himself by saying the wrong thing at the wrong time, possibly have murdered his wife? Hilarity ensues as Josh’s ragtag legal team of bumbling misfits piece together the clues and mount a defense. Tonight’s two-part finale will reveal who the killer is–and whether Josh has a future as a lawyer.

D’Agosto recently spoke with The GATE about stretching his comedic chops, working alongside Lithgow, resolving the murder mystery and season two. Watch Trial & Error on NBC and CTV in Canada.

Genre junkies recognize you from Final Destination 5, Gotham and Heroes. However, your resume also includes the cult hit Fired Up!, as well as Masters of Sex and Grey’s Anatomy. Trial & Error is an entirely different beast. What excites you about comedy?

Nicholas D’Agosto: “I’ve been doing comedy my whole life, although a lot of what I’ve done hasn’t been seen. Fired Up! is something that shows that, but I’ve done probably five or six comedy pilots. I feel like I’ve had multiple chances to be on a comedy before this. I love comedy because I’m generally a jovial guy. It’s not that I don’t have a dark side like everybody else does. On average, I have a lot of energy and I tend to be a really playful guy. When I go to set doing comedy every day, it’s serious in that I take it seriously, but it’s so much fun. Your day is full of laughter and that’s an amazing way to live.”

As somebody who has done comedy before, what made the Trial & Error concept special?

D’Agosto: “I was totally hooked right away. One of the things you read right away in pilots is the quality of the writing. That’s partially just the way it’s written in terms of the word structure and the way the scenes are structured. Do they feel sharp? Do you feel like you are getting the information clearly? You’d be surprised how often you read a pilot and you’re like, ‘I’m not really sure if this connects properly.'”

“Trial & Error was a very, very high concept show because it’s a show that is going to deliver you a murder mystery, but it’s also going to sell you on the idea that it’s a smart comedy, despite the fact we do some dumb things. We think it’s smart comedy. I was instantly taken by that. I saw what was fresh and new about it, but it wasn’t so new that it didn’t feel understandable or unapproachable.”

“Then, beyond that, there was an amazing role for me. I knew my character Josh right away. I instantly started reading the lines right off the page and I knew who he was. They didn’t know this, but they wrote this part for me. I’ve been doing this for 15 years now as a professional. I’ve had maybe a few roles where I’ve read it and been like, ‘I’m pretty sure that this is me.’ And that’s just because there are times where the idiosyncrasies of the character seem to match up on those extra two or three idiosyncrasies that I understand in myself. I’m just pleased that my impulse was right. That’s made the working relationship with the writers so good because we felt this instant kinship. Obviously, you can tell I’m hyperbolic about the show and my being in it. I loved it.”

A lot of 30-minute comedies feature stand-alone episodes. What did have an ongoing murder mystery add to the series?

D’Agosto: “It certainly adds a pressure for the writers because they have to be aware of through line. Most comedy writers are spending their time coming up with funny situations and funny jokes. On the other side, crime writers are writing interesting red-herring narratives. The Trial & Error guys had to do both. I think it was challenging for them, although they did an amazing job. What was fun about it was this was not just a comedy for me. I had that special role where I not only get to be comedic, but I’m often the only character that’s acting in a drama.”

“Not even John Lithgow is in the drama. The guy being accused is not taking it seriously. Of course, John makes these amazing dark turns. But, for me, I’m the one carrying the anxiety and the drama of this murder hanging over my head the entire time. Then, of course, I get to have these wonderful witty asides, where I get to be funny. For me, it’s the wonderful blend between the two worlds.”

In what ways did you feed off the energy of your fellow castmates and how did it help elevate your game?

D’Agosto: “One thing that is easy to feed off of is John. He’s so talented and so fun, but his enthusiasm and energy are off the charts. I don’t mean to say it’s too big. What I mean to say is it almost surprises you that someone like John carries this much enthusiasm and energy for his work at this stage of his career. He just loves it and that love puts everyone else at ease. It creates that kind of family that a comedy needs. That is something that someone like John is in the position to influence. On our show, John is going to be the tone setter. He was amazing in that regard.”

“Then, we all took chances with each other. The cast – Steven Boyer, Sherri Shepherd, Krysta Rodriguez and Jayma Mays – we would sit there having so much fun between takes. We would be singing and riffing off of each other. I would be like, “Guys, seriously. I have to go and actually care that what’s about to happen is not going to be good for me.”  The problem for me was getting sucked into the fun too much. Our director would come up to me and go, “So, Nick, I love what you did there. Let’s remember he could die. He really could die.” “Right. Yep. I can’t have too much fun.” For me, that was one of the interesting challenges, was having to resist getting into all the fun that those people were having all the time.”

How important is the resolution of the murder mystery in the remaining three episodes?

D’Agosto: “The resolution of the whodunit is enormous. For an audience, it’s essential. When audiences aren’t quite sure what to expect, they sometimes get shows that tie up nicely for them at the end of the season. The show answers something in a really satisfying way. Whether it’s sad or happy, it’s satisfying. One of the most notorious examples is a show like Lost that went on for too long. Many people who stuck with it didn’t feel like it was satisfying. Our show, and our writers, were really clear about this. Jeff Astrof, in particular, was so determined to make sure that he set up a lot of dominos and that they all got knocked over by the end. In our show, it’s important that people know they are going to get a satisfying answer. And, they will always get that at the end of every one of our seasons, because every season will be a new trial.”

Comedy strongly relies on facial expressions and reactions. What is the secret to nailing the Nicholas D’Agosto deadpan stare?

D’Agosto: “Fifteen takes. That’s the secret. You always must be thinking. It’s never about the stare itself. ‘This is the thing I am doing right now to vent a little bit about the other thing I’m trying to do.’ It’s always about keeping the character thinking and moving forward. The asides are just expressions in the moment. The only ‘person’ Josh trusts or understands what he is going through, is the audience is the camera. John’s asides are not just times he looks at the camera. They are moments to try and relate to someone. Essentially, he’s pleading to the audience. ‘Do you see what’s happening?'”

Fingers crossed that Trial & Error gets picked up for a second season. If that happens, how will winning this case and success change Josh?

D’Agosto: “That’s a great question, although I can’t guarantee he’ll be successful. I think that what he gains is an enormous amount of experience. What’s going to be fun in the second season is a great deal of comedy will come from the evolution of the relationships between Josh and the other people. He’s clearly committed to East Peck right now. His life is East Peck and I think what will be fun is the evolution of Josh as someone who is leaving New York and committing to his future in East Peck.”