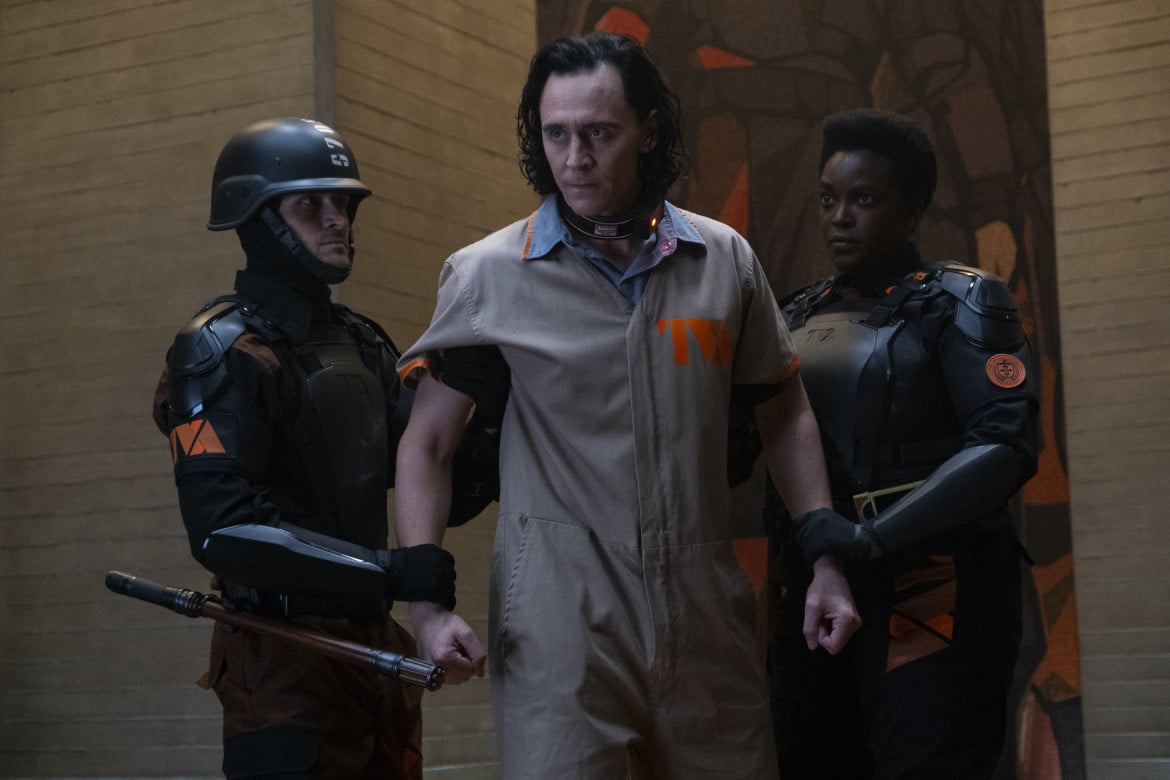 Marvel fans, and especially Loki fans, are going to lose it when they see the first episode of Loki, premiering Wednesday on Disney+. There’s a lot to take in, and it’s a weirdly fun, fresh take on the character, with the chance to finally see him completely out of his element.

So far I’ve seen the first two episodes, and it’s a series that’s full of twists, and dark turns, a plot that unravels slowly, and it stars Tom Hiddelston, as Loki, and Owen Wilson, as Agent Mobius. And let me just say right off, they’re a fantastic duo.

Loki picks up the moment after he flees the Avengers in Avengers: End Game, thanks to the Tesseract. Flung into the Gobi Desert, he comes down like a comet in a moment that reminded me a lot of the scene in Iron Man when Tony Stark comes down in his first suit. Right down to the pieces of his outfit laying scattered around him. Maybe it’s nothing, or maybe it’s a reference to the fact that Loki is about to go through some changes? We’ll see.

A moment after Loki lands, we get our first glimpse of the TVA, or the Time Variance Authority. Hunter B-15, played by Wunmi Mosaku, stands up to the literally fallen god, and takes him prisoner for being a “variant.” It doesn’t feel like a big surprise that Loki has spent a few seconds out of the clutches of the Avengers and he’s already in trouble, and Hunter B-15’s takedown is pretty epic.

Now, if you want to avoid spoilers, here is a good place to step away. As a quick summary, the series is fantastic. It’s completely different from what we’ve seen from Marvel so far, and the cast is amazing.

There’s more to talk about though, and while I’m not going to give a lot away about the series, it’s difficult giving you a good review without talking about some of the story.

Skimming ahead a bit, Loki ends up at the headquarters of the TVA, a group Loki himself admits he can’t imagine why he–a god–doesn’t know existed. The answer is pretty simple though–he didn’t need to know about them, because he wasn’t a problem until now.

The TVA is basically the police for what they call the “Sacred Timeline” and the agents, including Owen’s Agent Mobius, as well as Gugu Mbatha-Raw as Judge Ravonna Renslayer, are there to protect the timeline from changes that aren’t part of the plan. Who comes up with the plan? Why does it exist? You can watch the episode to find out, but Loki has the exact same questions.

There’s some awesome styling going on at the TVA. The art direction and sets are fantastic, with some major 1950s throwback designs that reminded me a little of the Legion set from season one, especially. Everything looks a little retro, a little noir, and very bureaucratic.

One of my favourite moments in the episode feels like pure existential gold. Going through what feels like a whole metaphysical examination, a guard asks Loki if he’s a robot. Loki is pretty sure he isn’t.

“Do a lot of people not know if they’re robots? What if I was a robot and I didn’t know it?”

And that starts a whole look into Loki’s soul. Since this is Loki circa 2012, he doesn’t know what life had in store for him after he was captured. He didn’t know he basically gets his mother killed, and he’s focused on getting back to Earth to rule it.

Agent Mobius though sees hope in the god of mischief. The agent wants to take him under his wing to help bring in a dangerous threat to the timeline. The catch is, naturally, Loki doesn’t want to help.

It takes Loki watching his own future, thanks to his TVA file, to realize that he hasn’t got much of a future. And, perhaps, he needs to do something else to avoid the same fate.

Can he? Will he? It’s going to be interesting to see.

There’s a lot of moments, and jargon, that feel like it’s going to be hugely popular in this next phase of the MCU. The Sacred Timeline, one comment about multiversal war, Nexus events, and of course, and as a reference to the timeline, someone mentioning madness. Any Marvel fans will see the connection to a Multiverse of Madness at this point, and I’d expect Loki is going to help create both madness, and a complicated multiverse.

There’s a lot to love about the whole treatment that Marvel has given Loki. The theme music and score are orchestral, heavy, dark, and retro, in all the right ways. There’s also a nicely done Loki-green Marvel logo, and the credits are naturally filled with tidbits that will have fans pausing non-stop to catch every reference.

The series is obviously going to jump through time a lot, we get a reference that even I thought might take us back to Mephisto at some point (hang in there, WandaVision fans), and we get a perfectly mundane version of Loki that feels even more Loki than we’ve seen before.

Stripped of his magic in the TVA, Loki is left to rediscover himself, and that seems like the big takeaway from a series dedicated to all things Loki. There’s a lot more to explore here though, and that includes the TVA and their team.

I’m a big fan of Owen Wilson as “Mobius M. Mobius” AKA Agent Mobius. next to Hiddelston, the two actors find comedy in the simplest of moments, but there’s also a lot of heart between the two men. You can tell right away that Mobius has a soft spot for Loki’s brand of irreverence and strange nepotism.

“I’m going to burn this place to the ground,” Loki says.

“I’ll show you where my desk is, you can start there,” Mobius replies.

I also love that Loki feels like it blends some things into the MCU that we haven’t seen before. There’s some very timey-wimey, a la Doctor Who, and Jeremy Bearimy vibes from The Good Place going on. Director Kate Herron mentioned at the press conference yesterday that there’s also a lot of inspiration from film noir, and thrillers like Seven.

So where are we headed next? It’s hard to say exactly, because even in the first two episodes, there’s a lot of setup going on. But it feels very much like a series that will finally either fully humanize Loki, to the point where he’s fighting for the good guys, or maybe it will finally just make him a full on villain. I have a hard time accepting the latter, but it’s also hard to imagine Loki not being, well, Loki.

In a lot of shows, Loki becoming a good guy would be the equivalent of your favourite on-screen romance settling down and becoming domestic. It might be the natural next step, but it takes all the drama out of the story.

Finally, let talk real fast about real spoilers. Really, stop here if you don’t want to know any more, because these may be more fun after you’ve seen the first episode.

So what’s going on with the TVA elevator? The levels are IUL, FE3, LK3, 2W1, GYE, CET, TSY, SYF, and so on. I’d love to know what they stand for, but I’m assuming it’s just part of the bureaucracy.

Also, Infinity Stones! The TVA apparently catches a ton of variants who are wandering around with Infinity Stones, and because magic doesn’t work in the TVA, they use them as paper weights in the office. That’s really the moment where it feels like Loki starts to come around to the fact that his plans maybe will always fail, but I also love how the show basically takes the stones down a notch.

Finally, as many have pointed out from the trailer, there’s a detail that explains Loki is gender-fluid. Hopefully, at some point this season we’ll actually see the MCU run with that idea, but there’s one other tidbit on the same fact sheet. Apparently Loki is active in Sector: 1900-2099. I’m assuming that must mean the years where he’s active, and if so, he’s apparently going to be running around a lot this season.

Or maybe he already has done this, given the weirdness of timey-wimey things?

Once you’ve seen the episode, let me know in the comments what you thought. Also, who’s your favourite character, and what are you hoping for in Loki?

Stay tuned for more on Loki coming up on The GATE.