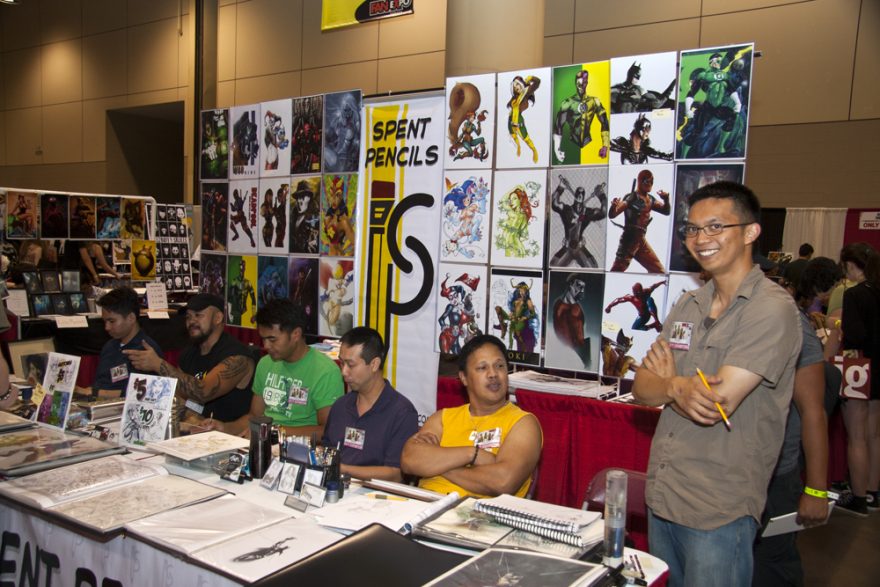 August represents one of my favorite times of year. It’s sunny outside, the CNE is running, and of course, there’s the annual FanExpo at the convention centre, filled to brimming with fans in costumes, buying comic books, and meeting some incredibly cool celebrities (like William Shatner).

The thing about FanExpo though is that, around the edges of the event, outside of the big-name titles and attendees, there are some very cool indie and up-and-coming people there showing off their wares, and I wanted to look at a few of them so you can go say hello.

If you’re a comic book fan, or a fan of comic book art, you should drop by to see the guys from Spent Pencils, a group of six artists who are at FanExpo to show off their portfolios and sell their works. You can find them along Artist Alley at A140 (near the Ubisoft booth), which is one of the outside-facing booths at the end of an aisle. In particular, there’s Paul Limgenco, who has some killer renderings of Wolverine and Iron Man, to name a few, and he’s selling prints for $10.

Clutch the series is another notable booth to stop by, representing the team behind a femme fatale web series that filmed in Toronto about an attractive pick-pocket named Kylie, played by Elitsa Bako, who is thrust into the world of major organized crime.

Last but not least, there’s the group behind the Dark Rising films and television series who are at FanExpo promoting their latest film, Dark Rising 2. Stars Landy Cannon and Brigitte Kingsley are on hand this weekend at the booth, as is Nug Nahrgang, and you can also catch the FanExpo screening of the new film tonight, August 27, at the Royal, 608 College St. West at 9:30 PM. (Since I’m not clear on how tickets are working for the screening, best to drop by the booth and ask first.)

FanExpo runs until Sunday, August 28 at the Metro Toronto Convention Centre – South Building. For more details about the event, and to view the complete list of guests, go to www.fanexpocanada.com.