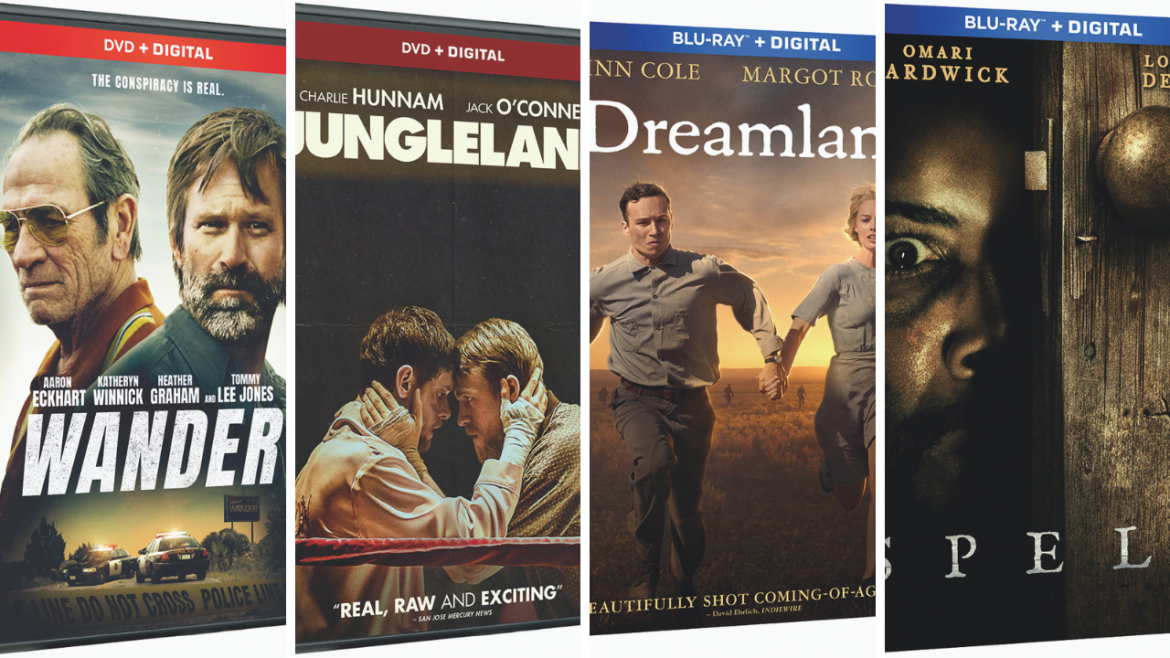 Enter now for a chance to win one of three January movie prize pack from Paramount Pictures, featuring four of their latest Blu-ray and DVD releases: Spell on Blu-ray, Jungleland on DVD, Dreamland on Blu-ray, and Wander on DVD.

For full details on the films, read the details below, and fill in the form at the bottom of the page to enter. Good luck!

Spell: While flying to his father’s funeral in rural Appalachia, an intense storm causes Marquis (Omari Hardwick) to lose control of the plane carrying him and his family. He awakens wounded, alone and trapped in Ms. Eloise’s (Loretta Devine) attic, who claims she can nurse him back to health with the Boogity, a Hoodoo figure she has made from his blood and skin. Unable to call for help, Marquis desperately tries to outwit and break free from her dark magic and save his family from a sinister ritual before the rise of the blood moon.

Jungleland: Stanley (Charlie Hunnam) and Lion (Jack O’Connell) are two brothers struggling to stay relevant in the underground world of bare-knuckle boxing. When Stanley fails to pay back a dangerous crime boss (Jonathan Majors), they’re forced to deliver an unexpected traveler as they journey across the country for a high stakes fighting tournament. While Stanley trains Lion for the fight of his life, a series of events threaten to tear the brothers apart, but their love for one another and belief in a better life keep them going in this gripping drama that proves family pulls no punches.

Dreamland: Two-time Academy Award nominee Margot Robbie (I, Tonya; Once Upon a Time in Hollywood) produces and stars alongside Finn Cole (Peaky Blinders) in director Miles Joris-Peyrafitte’s mesmerizing love story set amidst America’s struggle during the Great Depression. Eugene Evans (Cole) dreams of escaping his small Texas town when he discovers a wounded, fugitive bank robber (Robbie). Torn between claiming the bounty for her capture and his growing attraction to the seductive criminal, Eugene must make a decision that will forever affect the lives of everyone he’s ever loved. Travis Fimmel (Warcraft), Kerry Condon (Avengers: Infinity War), Darby Camp (“Big Little Lies”) and Lola Kirke (American Made) also star.

Wander: Aaron Eckhart, Tommy Lee Jones and Heather Graham star in the edge-of-your-seat thriller following Arthur Bretnik (Eckhart), a paranoid private investigator with a troubled past. After Bretnik is hired to investigate a suspicious death in the town of Wander, he becomes convinced the case is linked to the same ‘conspiracy cover up’ that caused the death of his daughter.

Giveaway Details & Conditions: The GATE’s Paramount Pictures January home video giveaway is open to residents of Canada who are over the age of 16. The contest closes on Wednesday, January 20, 2021 at 1:00 PM (ET). The chance of winning depends on total number of entries. Each prize is valued at approximately $80, and cannot be exchanged for cash or any other form of credit. The prize may not be exactly as shown. The GATE reserves the right to substitute the prize for another of equal or greater value. One entry per person, for each entry method.