Since 1915, Leo Tolstoy’s classic novel, Anna Karenina, has been adapted eleven times for the big screen–and another handful of times for television–but that apparently didn’t stop director Joe Wright from tackling this complex story with playwright and screenwriter Tom Stoppard, with mixed results.

Wright’s Anna Karenina is a wryly conceived and originally-staged production that focuses on aspects of the classic story at the expense of depth and power, but it’s a film that stuns on many levels all the same.

Unfolding with the conceit that we’re witnessing Anna Karenina’s 19th century Russia, as if the story were coming alive from the confines of a run-down theatre, the film follows Anna (Keira Knightley), a married, rich aristocrat, who falls for another man, Count Vronsky (Aaron Taylor-Johnson).

As Anna allows herself to fall farther and farther in love with the Count, ignoring all pretenses of discretion, her society begins to shun her, and her husband, Alexei Karenin (Jude Law), must find some way of dealing with the situation. 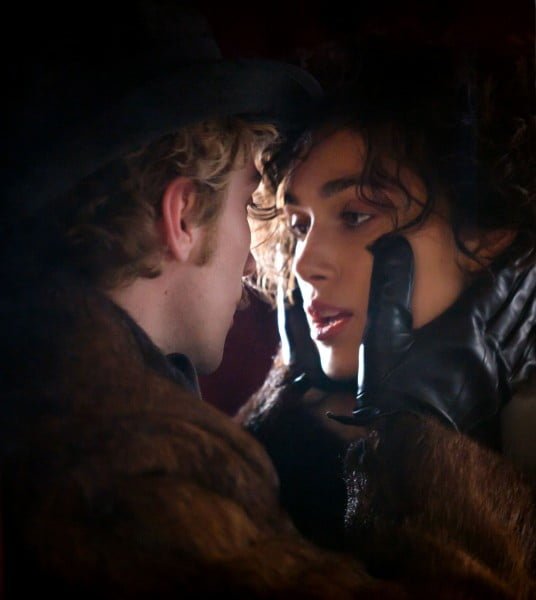 Anna Karenina is a undoubtedly a stunning film, but it excels further because of Wright’s keen work at bringing the themes of love and separation alive within the beautiful sets, locations, and the staging, which feels like a trade-off against the story’s true depth.

For his part, Wright keeps the story flowing like an elaborate dance sequence that feels live, like theatre, but set within a dream-like world. The truly artful editing also adds to that feeling, and helps propel one of my favourite scenes in the film–one in which the two lovers spell out their feelings in blocks. That scene is simple, and yet entirely effective on every level.

The wow-factor cinematography, and the powerful music, add to that feeling as well.

My problem with Anna Karenina comes back to the characters and the plot, which should act as a support for the film’s entire structure. For all it’s clever technical expression, and despite the fact that the story works, and the actors are compelling, Wright loses the passion of the piece, especially in the second half of the film.

While I have no doubt Anna Karenina will be up for multiple Oscars–perhaps even an acting nod for Knightley and Taylor-Johnson–I think the film is far more likely to pick up technical wins before it wins anything for the performances.

Maybe I will eat those words, but, for me, Knightley captures the character’s grace and style, but she delivers a frequently tortured performance, with every other aspect of the character falling aside in Wright’s translation to screen.

Wright and his filmmaking team deserve big respect for their adaptation of the novel, but when the main characters feels like caricatures, there is simply no way to end the film satisfyingly, which is why the film collapses on itself by the end.