There’s a long list of ways in which M. Night Shyamalan’s latest thriller, Split, could have gone horribly wrong. Its core concept is borderline offensive and triggering from the opening moments, especially for people who have gone through severe violent and/or sexual trauma in their lives.

Kevin (James McAvoy) suffers from a form of dissociative disorder that has splintered his psyche into two dozen fully formed personalities vying for control of one man’s life. At the start of the film, one of these personalities – a bespectacled, soft spoken, obsessive compulsive pervert named Dennis – abducts a trio of young women (Anya Taylor-Joy, Haley Lu Richardson, and Jessica Sula) in a restaurant parking lot. He brings them to a sort of warehouse-like hideout and locks them away. Gradually, the women start to see some of Kevin’s other personalities (including a matronly woman, a nine year old boy, and a Boston accented wannabe fashion designer), but none of them are forthcoming about why they’ve been kidnapped or the purpose of their presence outside of being told that someone or something will be coming for them and they won’t like it when it arrives.

Through conversations that he has with his kindly, supportive therapist (Betty Buckley), we learn that Kevin has recently suffered a setback of some kind after a decade of relative stability, but he won’t tell his doctor much about why he lost his job or even much about the childhood traumas that led to the split personalities in the first place. The therapist likes Kevin and his many personalities as individuals, and she seems him as extraordinary and a key piece to her research that tries to look at dissociative disorders as advanced evolutionary anomalies that should be celebrated instead of scorned.

These two plot threads come together in ways that are sometimes novel and unexpected and other times sadly predictable. Shyamalan doesn’t have a lot of plot to work with here, but plenty of mechanical and technical tricks and twists up his sleeve. Split parses out details with a great deal of patience despite its lack of subtlety on the whole. It’s a thriller that escalates in increments instead of enormous leaps and bounds. The audience will learn one thing, they’ll be asked to remember it for later and somewhere down the road there will be a payoff. It’s a simplistic formula for a B-movie, but the kind of storyline that Shyamalan used to excel at before he decided all of his films needed to swing for the fences with every turn.

That patience and dedication to storytelling craft helps a lot here. At times, Split feels like just another chiller where some teenage girls are locked away by a psycho that gradually strips them of their clothes for one reason or another while the audience waits for the other shoe to drop. Those moments aren’t nearly as exciting as the ways Shyamalan builds his characters. Richardson and Sula are saddled with thankless roles, but details about Taylor-Joy’s Casey are parsed out via stark flashbacks that suggest a sort of unknown kinship between captive and captor. The relationship between Kevin and his therapist offers the story an emotional backbone and paints the ostensible villain as having moments worthy of audience sympathy. It builds respectability for mental illness in a story where one often expects the exact opposite to happen. 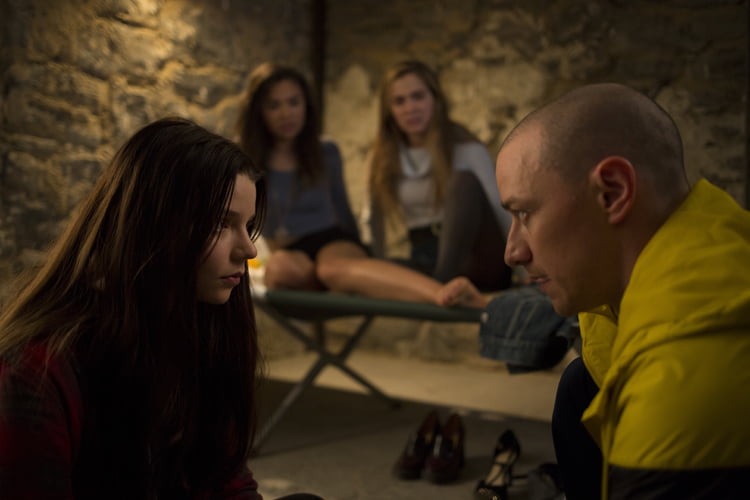 Shyamalan hasn’t made a horror picture in the truest definition with Split, but rather a nuanced subtle character piece that happens to unfold in a rather unsubtle world. The filmmaker still wants to shock, but he also wants the viewer to engage with the material on more than a visceral level. Admittedly, the kind of immature viewership that Split is being marketed towards won’t be willing to take that extra step, but it’s a fascinating story to think about. Instead of only offering up rehashed variations on a tiresome and offensive “trauma shapes who we are” narrative, Split wants the viewer to question the therapeutic benefits of dealing with said traumas before they threaten to consume the victims. A sort of mirror image storyline begins to emerge throughout the story, and all the details are there, but Shyamalan makes the viewer work harder to try and find it all. It’s a movie with a stupid, sometimes illogical plot that makes the audience think about it all. If they don’t think about it, the response to the picture will likely be a black and white, love or hate response based on what individual viewers find spooky. Anyone willing to give the film a few extra moments of thought during and after will be richly rewarded. It’s not just a puzzle box thriller about a troubled villain and three helpless girls, but a look at one of our greatest fears: what if we became something we hate?

Again, not all of this works. There was a point headed into the action heavy final act that almost lost me entirely, and one of the biggest reveals is one of convenience rather than intelligence. Once Split gets to where the main thrust of the story is going, one almost wishes that it didn’t have to go there. For a few fleeting, but inexcusable moments Split does become what it has spent so much time and energy trying not to be. I thought it was a bit of a betrayal, but the more I thought about the story the more I realized that was the whole point. That belief coalesced further when Shyamalan mounts one final twist in the film’s closing moments, one that will annoy some, please others to no end, and leave many perplexed.

By the time the credits roll, Split will have divided audience members in a variety of different ways, but there are two things that everyone will be able to agree on. The first is that the cinematography from It Follows lenser Mike Gioulakis is stunning He fits Shyamalan’s newly rekindled love of gorgeously composed formalism to a T, making the most of a film that takes place largely in confined spaces. I don’t think there’s a single shot – no matter how creative the angle – that isn’t perfectly centred or split in an effort to underline the material.

But the biggest attraction here has to be McAvoy, making the most out of a set of characters that could have come across as cartoonish. No matter the personality that takes hold of Kevin, McAvoy makes sure to portray each with a certain sense of charm, likability, or forgiveness. No matter how theatrical Shyamalan’s material gets, McAvoy always plays the lead as a well organized bundle of tics and neuroses. It’s as subtle as an over the top character gets, and no matter what the viewer takes away from Split by the end of it, they’ll at least know that McAvoy gave his all for it. The film will likely spark lengthy conversations among those who see it, but the work put in by its star speaks for itself. Shyamalan asks a lot of his capable lead, but just as much out of the people watching it.

Check out the trailer for Split: