There’s some great acting on display in South African filmmaker Oliver Schmitz’s courtroom drama Shepherds and Butchers, but little in the way of novelty, originality, or subtext. It’s far from a poorly made or mounted film, but there’s an unshakable feeling that this adaptation of a similarly titled novel by Chris Marnewick leaves a lot on the page. The setting and subject matter alone crackles with dramatic possibility, so it’s a bit disappointing that Schmitz opts for a bog standard anti-death penalty picture. It’s not that the message here isn’t coming across, but that there are so many other lessons around the periphery that are left adrift thanks to a narrow focus.

Shepherds and Butchers opens with nineteen year old death row prison guard Leon Labuschagne (Garion Dowds) snapping and shooting seven black soccer players seemingly in cold blood. The facts of the mass murder aren’t in dispute, and the thankless task of defending Labuschagne falls to Johan Webber (Steve Coogan), a human rights lawyer and anti-death penalty advocate who knows his client’s guilt, but wants to save his life. Although skeptical of his client thanks to the horrific nature of the case, Webber formulates and researches a theory that Leon – who actively participated in a record number of hangings across only two years on the job starting at age seventeen – was traumatized by a job he wasn’t mentally prepared to handle thanks to his young age.

On one hand, that’s a solid enough premise for a lightweight courtroom drama, but something is needed to elevate it. Schmitz employs a lot of gloss, style, and cliché to Shepherds and Butchers, but the biggest letdown is that it’s a period piece that ignores the issues and weight of history. Shepherds and Butchers doesn’t take place in modern day South Africa, but in 1987; during apartheid and amid the lengthy Angolan war. Leon is a white man who executed predominantly black prisoners, and who murdered black me outside of his job. In South Africa at the time, military service was a requirement of all young men, and the easiest way out of it was to join the police force, so Leon took a brutal position of authority that he couldn’t mentally handle so he didn’t get shipped to a warzone. 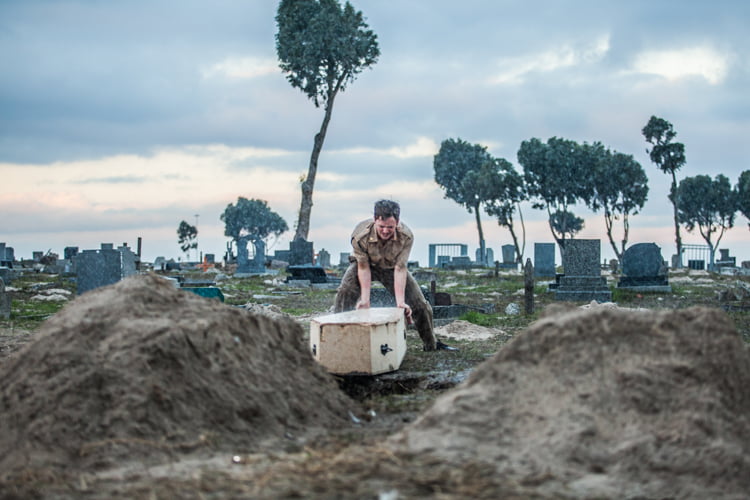 One would hope that Schmitz, being South African, would have touched on some of this, but outside of maybe two or three lines of dialogue, these subjects are never broached or expanded upon. They’re almost too absent to even be called subtext. All the audience gets is a lot of finger wagging about how “an eye for an eye makes the whole world blind” and why training people to kill for a living is morally and psychologically wrong. That’s fine and noble, but the setting and period of Shepherds and Butchers promises a powder keg tied to a lot of mixed emotions, and in return all the viewer gets is a lecture about how the death penalty is a bad thing. It’s also made clear that Leon was recently left by his wife and child, and while we hear how things went sour, Schmitz never shows us what happened, preferring to show the grotesque nature of hangings several times instead of developing any kind of character.

This lack of greater substance makes Shepherds and Butchers feel rushed. Schmitz wastes no time getting to the trial and the dynamics of Webber’s case, but outside of a few glancing indictments of the South African penal system, none of the case feels developed in full. Most of the story takes place during lengthy sequences of Leon getting grilled by the prosecuting attorney (Andrea Riseborough, with surprisingly little to do) or his own counsel trying to unlock repressed memories that could offer insight into his mindset. All that emerges from this is a laundry list of stock courtroom clichés: the families of the victims hold Webber in contempt; the witness will break down uncontrollably; the judge will grow increasingly skeptical of Webber’s methods; both sides will deliver impassioned speeches about the nature of justice; Leon’s family will tell Webber he’s doing an awful job; Webber will stand alone in the courtroom contemplatively sighing to himself about the case; the defense and the prosecution will show a moment of mutual respect for each other. The story has an original hook, but anyone who has ever watched a courtroom drama could have plotted out exactly where Shepherds and Butchers is going.

Schmitz’s tight sense of pacing and the lead performances help this one remain watchable, though. Despite a wavering accent of sometimes indeterminate origin, Coogan portrays Webber nicely as a weary, nervous man and wisely not as a crusader with a hero complex. He sells the story, but Dowds’ inmate provides the emotional core. It’s not a wholly sympathetic character to play, but Dowds makes the viewer want to learn more about what makes him tick, and in the young actor’s hands he sells the idea of why Webber would want to remain a part of the case. Because of their efforts, Shepherds and Butchers has some special things in it, but it isn’t altogether a special movie of note.

Shepherds and Butchers opens at Carlton Cinemas in Toronto on Friday, February 3, when it will also be available on VOD.

Check out the trailer for Shepherds and Butchers: