Review: ‘Get Out,’ directed by Jordan Peele 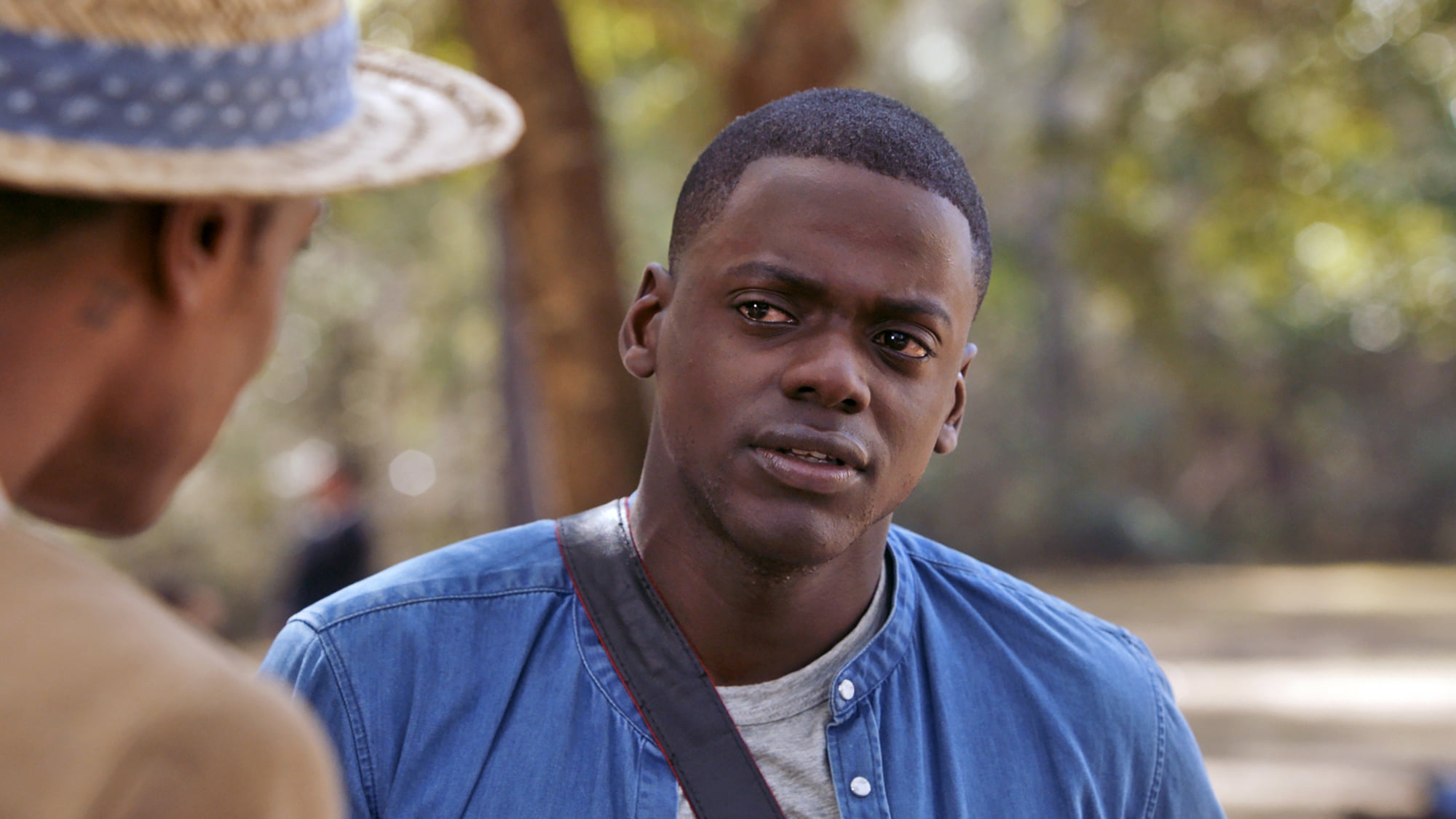 Get Out not only marks writer and first time feature director Jordan Peele’s biggest departure yet from the comedic roots he’s most widely known for, but also heralds the arrival of a talented, perceptive filmmaking voice. Lovingly embracing and subverting horror movie clichés and conventions in equal measure while at the same time delivering a well honed, often uncomfortably uproarious satire on being black in America, Get Out will stand as one of the most assured debut features once the year is over. It’s an exceptional mix of smart writing, thoughtful direction, and crowd pleasing theatrics that will appeal to more than just horror and comedy buffs. There are plenty of laughs and a handful of great spooks for those looking for them, but it’s so well made on the whole that it gives the viewer a lot of confidence in wherever Peele’s increasingly intriguing career takes him next.

Photographer Chris Washington (Daniel Kaluuya) has reached an important milestone in his five month relationship with his girlfriend, Rose Armitage (Allison Williams). It has come time for Chris to meet her parents, something any suitor of either sex approaches with a great deal of natural fear and trepidation, but it’s compounded by him being black and her being white. Rose seems woke and sympathetic, but Chris knows a lot more about how awkward it is to be black every day of his life. When Chris arrives and meets her neurosurgeon father (Bradley Whitford) and hypnotherapist mother (Catherine Keener), the parents greet their houseguest enthusiastically and with open arms (less so Rose’s MMA obsessed brother, played by Caleb Landry Jones). He’s a bit put off by how Rose’s parents have a pair of black servants (Marcus Henderson and Betty Gabriel), but he’s willing to go along with what he sees as fairly typical white, suburban behaviour. Problems with his situation start to emerge after Rose’s mother pushes hypnosis on Chris (to help him quit smoking) and are compounded when the parents throw an annual shindig full of awkward, creepy white guests (and one out of place and seemingly disturbed black man) that belies a sinister ulterior motive for liking black people that the family has kept hidden for years.

Although Peele delivers some of the most memorable and effective jump scares in recent memory throughout the early and late moments of Get Out, the debut filmmaker’s greatest achievement here involves his restraint. Get Out escalates naturally and at a decent pace instead of ramping up too quickly or delivering a half-baked story to hang jokes and scares from. Even if most viewers will likely figure out the big reveal well in advance of it happening, Peele delivers his story in a confident, straightforward manner. In terms of style and escalation, Peele never hides his cinematic influences; most notably Wes Craven, John Carpenter, Spike Lee, Robert Rodriguez, and Alfred Hitchcock, the latter of which Peele has a great deal of fun taking the piss out of with a third act detour where a previously minor character (LilRel Howery, stealing all his scenes as Chris’ TSA agent buddy and dogsitter) gets a chance to guide the story a la Psycho. When it comes to executing his premise, Peele has something pointed to say that’s coming from an honest, earned place of frustration, but he also wants to share a genuine and unabashed love for a style of filmmaking he has studied extensively and intuitively. 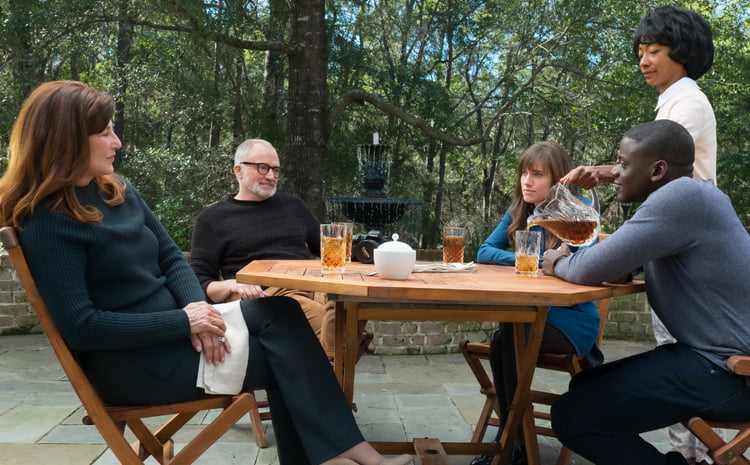 Those familiar with Peele’s prominent role as part of the comedic duo Key and Peele won’t be surprised that Get Out comes packed with a great amount of good humour and social subtext (in case the overall premise wasn’t a huge hint). Watching Chris trying to remain polite when being grilled by a bunch of rich white people about how he must be stronger, better in bed, and hipper than they are definitely shines a light on how annoying it can be to be a black person and the burden of stereotypes. Even when the Armitage clan acts accommodating towards their guest it always feels forced and downright condescending more often than welcoming. Peele doesn’t blunt or dumb down the film’s subtext about how black people have faced a false sense of inclusivity for eons and have been unfairly forced to walk on eggshells around white authority figures. It’s a film about the black experience that takes the viewer by the hand and throat in equal measure to place viewers in the shoes of someone who has been conditioned by society to feel out of place his entire life. His fears become our fears in a hurry, and it’s almost impossible to not be affected or moved by them.

A great deal of the film’s success outside of Peele’s storytelling abilities, mastery of suspense, and satirical smarts comes from the performances, and the cast comes packed with pros who immediately understand the tone and tenor of the writer-director’s voice. Kaluuya plays the everyman part exceptionally and earns and enhances our sympathies throughout. Whitford and Jones are no strangers to playing suspicious, possibly villainous shifty types, and both play their parts perfectly, but it’s awesome to watch Keener relishing the chance to play someone almost instantly identifiable as evil from the moment she appears on screen. All of them understand when the film needs to be humorous and when it needs to be horrific, and they match Peele’s sensibilities to a T. These are across the board actors capable of switching their charms on and off in the blink of an eye, and they’re a joy to watch in tandem.

Get Out isn’t without its flaws, as is the case with most first features. A plot thread involving a childhood trauma from Chris’ past isn’t paid off as well as it could have been and feels awkwardly integrated to play into a final act jolt. There are some logical suspensions of disbelief that would be hard to overcome if the film on the whole weren’t as compelling and entertaining as this. Those are minor quibbles for a film that’s been made with such clarity of artistic vision, strength of message, and technically assured chops. Get Out even builds to a climax that’s more notable for what it holds back from doing than what it ultimately ends up doing. It’s never that scary of a film by traditional horror standards, but I would argue that the lack of constant shock tactics works in Peele’s favour. It makes the final scene equally intense and breathless, and at a point in American history where “I can’t breathe” has become a rallying cry for increased understanding of racial issues, I can’t think of a more appropriate conclusion.

Here’s hoping that Peele continues his path as a filmmaker. If his next effort is even half as accomplished as Get Out, audiences and critics alike will be in for a real treat that won’t be forgotten for quite some time.

Get Out opens in theatres everywhere on Friday, February 24th.

Check out the trailer for Get Out: