Review: ‘Hounds of Love,’ a film directed by Ben Young

Australian filmmaker Ben Young’s debut feature Hounds of Love has been generating a lot of buzz following wave-making appearances on the film festival circuit (most notably at Venice, SXSW, and Tribeca), and it’s not hard to see why. It’s a stylish, uncompromising thriller designed to make viewers cringe with discomfort and malaise. It’s as sleazy and off-putting as modern cinema often gets without getting buried in some sort of VOD wasteland, and it is indeed worthy of big screen exhibition in terms of performance and its visual and aural sensibilities. But a closer look suggests that while Hounds of Love has been carefully calculated to provoke visceral reactions in viewers, it’s in service of a well-trod story that has little left to say.

Based very, very loosely on true events, Hounds of Love is set during the December summertime in Perth, Australia in 1987. While en route to a house party, teenager Vicky Maloney (Ashleigh Cummings) stops to chat up a fairly normal looking suburban couple, John and Evelyn White (Stephen Curry and Emma Booth). They offer to sell her some weed before she gets to her party, so she follows them to their home. When she’s finally in their home, the couple, who like to torture and murder young women, shackle her to the bed, rape, beat, and gag her. Vicky has become a plot of an unorthodox sort of kidnapping and ransom plot, but one where John and Evelyn still intend to murder their captive when all is said and done.

Unlike most films of this nature, writer-director Young sets his grimy tale in blistering sunlight rather than murky tones, preferring the appearance of actual shadows on walls to all encompassing darkness. It’s an effective technique that has been used memorably by other filmmakers in the past (perhaps most notably Hitchcock and Bergman), and one that modern horror filmmakers should employ more often, provided that they have the clarity of vision that Young possesses. Outside of a trio of stellar performances, especially from Booth, the brightness of Hounds of Love might be the most interesting thing about it.

Like many filmmakers these days, Young like to employ slow-motion to give off nightmarish vibes, set scenes to sometimes precious soundtrack choices (most notably the inciting attack on Vicki set to The Moody Blues’ “Nights in White Satin”), and offer up plenty of distancing “stalker” shots to underscore how the audience is seeing something that they shouldn’t be party to and are unwillingly becoming complicit in. While the subject matter is off-putting to a point where it’s easy to see why some have quickly labelled the film as being reprehensible trash, Young also displays a good filmmaker’s eye for restraint. The worst bits of every attack on Vicki are obscured or not seen at all. The viewer might hear what’s happening, but Young knows that if he shows them exactly what’s happening to Vicki, the illusion and suspense is replaced by overwhelming despair. What a viewer can envision in their mind is probably far worse and more graphic than what Young could ever stage, and he knows this as well as Hitchcock did.

Hounds of Love is quite good at what it’s trying to attempt, and it’s trying very hard not to appear like a clone of similar tales of romantically involved, dysfunctional psychopaths like Natural Born Killers or Kalifornia, but such a reliance on style makes Young’s filmmaker influences more pronounced, showy, and less organic. Young’s sense of style feels too good most of the time for his own screenplay, which is a rather rote, boilerplate chiller where only small, interchangeable plot details ever seem in doubt. I was more interested in what camera angle was coming next than I was with what Evelyn and John’s next moves were going to be. Even a subplot involving inept cops (are there any other kind in these films?) and Vicki’s divorcing parents (Susie Porter, Damian de Montemas) warring with each other over Vicki’s whereabouts has been transplanted from any number of other films about missing children or spouses. Ditto the mounting tensions between John and Evelyn meant to mirror a similarly dissolving relationship. There’s nothing terribly profound or original being said about “the dark heart of suburbia” in Hounds of Love, and he’s forced to double-down on stylistic choices and the performances of the cast for the material to work. 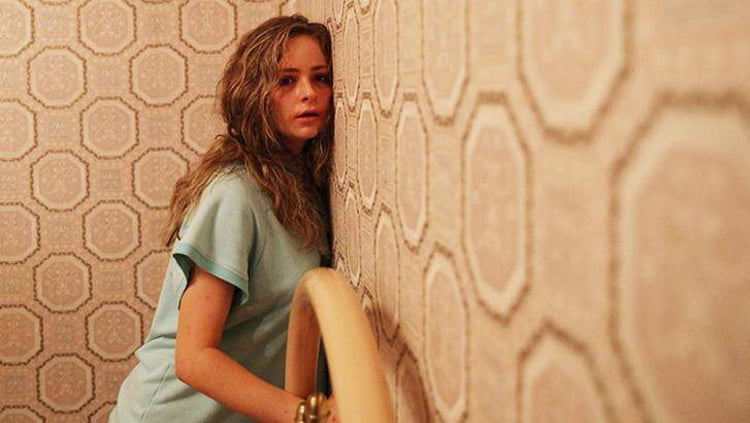 There isn’t even much subtext to work with here that hasn’t been attempted before, and the only bit of metatextual flavour that works is still tied to Young’s visual sensibilities. At least it’s a good one, though. In the most novel twist, the killers, who are trying to get their own kids back and have an implied sense of shared impotence, both have crippling Obsessive Compulsive Disorder. It gives a reason for a film this grungy to be so sanitized and clean in appearance to a point where even the fake wood paneling on the walls looks polished. It’s one of the few films that I’ve ever seen where the psychological affliction of the character exactly spells out the filmmaker’s visual M.O.

If it sounds like I’m being harsh on Hounds of Love, it’s only because given the amount of talent on display and the morality pushing nature of the material, I was left wanting more than what Young ultimately delivers. There’s still plenty that Young does right, especially in his creation of a strong, capable, resourceful, and intelligent heroine worth rooting for and in the staging of an admittedly intense climax that remains the main reason I feel willing to give the film as a whole a mild pass.

Hounds of Love is a film meant to act as a calling card for a filmmaker, and it does just enough to showcase Young’s talents to make me interested in what he does next. It’s also so well made that I wish it was better than just an okay representation of a deeply problematic genre that’s paradoxically both misunderstood and, in some cases, justifiably derided. It’s a fine piece of technical filmmaking and performance, but Hounds of Love always comes close to cancelling itself out.

Hounds of Love is now playing at Carlton Cinemas in Toronto, Mayfair Theatre in Ottawa, Hyland Cinema in London, Ontario, and in select U.S. cities.

Check out the trailer for Hounds of Love: