Review: ‘A Futile and Stupid Gesture’ 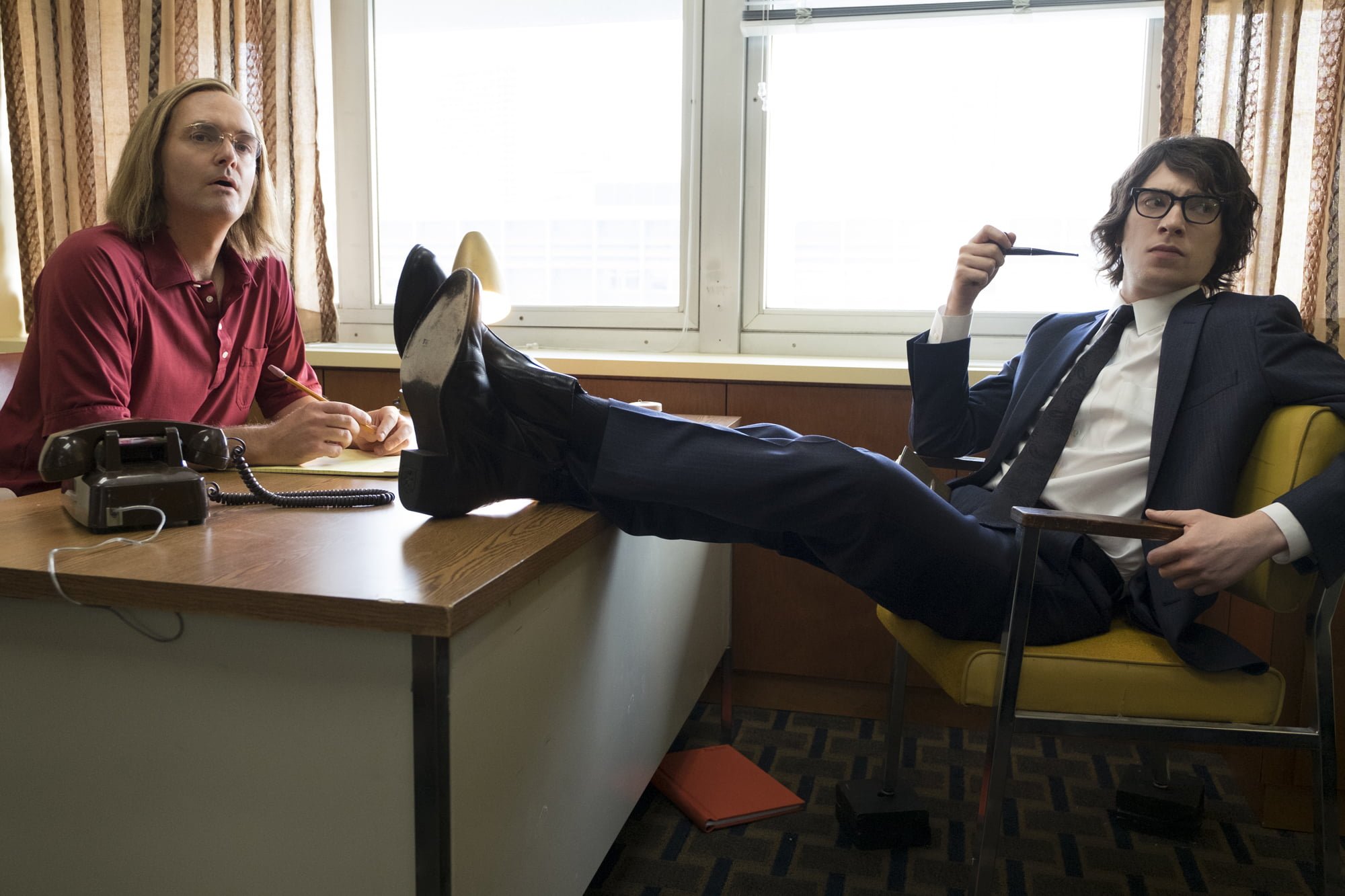 Gently skewering biopic conventions in a manner befitting the film’s witty, yet unreliable protagonist, A Futile and Stupid Gesture offers some hearty laughs before turning heartfelt and serious, mostly without missing a beat. The first forty minutes or so of this look at the life and times of National Lampoon co-founder Doug Kenney fall perfectly in line with both the humour magazine’s golden age and the cinematic sensibilities of director David Wain (Role Models, Wet Hot American Summer). But it’s how Wain and leading actor Will Forte choose to depict the harsher aspects of Kenney’s personality that viewers will likely remember with greater fondness.

Unsure of what to do once he graduates from Harvard University in the late 1960s, irresponsible, procrastinating, smart-assed English major Doug Kenney (Forte) convinces his wittier, more reliable and refined best friend and co-worker Henry Beard (Domhnall Gleeson) to continue their work at the satirical Harvard Lampoon on a national level. While hardly an overnight success, Beard and Kenney’s National Lampoon helped to usher in a new era in American comedy, thanks in no small part to the duo’s hiring of talented writers and performers that were on the cusp of breaking away from the counterculture and into the mainstream. The writers were competitive and frequently at war with one another. The magazine’s publisher (Matt Walsh) was constantly at war with Kenney and Beard over the publication’s racy, offensive, and boundary pushing content. Beard would prove to be the level headed rock the company built its sleazy reputation upon, but Kenney – for better and for worse – would become the public face of the magazine’s power structure. As Kenney’s comedic empire grows, cracks between the friends begin to grow, but larger fissures appear in the writer’s personality once he decides to take on more projects and spin-offs than he can physically and mentally handle.

Wain starts A Futile and Stupid Gesture (the title taken from journalist Josh Karp’s 2006 book of the same name, as well as one of the most remembered quotes from the Kenney penned Animal House) like a raucous party. A savvy filmmaker who has proven to be one of this generation’s sharpest comedic minds, Wain deftly captures the sort of middle finger waved in the face of the establishment that Kenney and Beard wanted to convey. By that same token, Wain understands that the National Lampoon style of humour has become outdated, problematic, and out of place. While Wain remains respectful towards Kenney’s take-no-prisoners legacy, there’s a great gag early on about how National Lampoon traded in tits and backhanded digs at racism, but never hired a single writer of colour or more than one female writer (who would leave because of the sexist, testosterone fuelled environment). If one were to pick up an issue of the Lampoon from its mid-1970s heyday, most of the jokes would be too “of their time” to be funny, and most of them would be outright cringe inducing. It’s a nostalgic look back at comic history that isn’t rose coloured, but also unafraid in the early going to be a bit goofy and lighthearted.

Making a film about the decidedly un-PC legacy of the Lampoon brand in 2018 is a dicey proposition, but Wain and writers John Aboud and Michael Colton skirt any such concerns by wisely keeping their focus on the key players involved with making the brand, most specifically Kenney. A great deal of A Futile and Stupid Gesture is spent watching creative types bandy ideas around, argue ideologies, and try to make rational sense of their unexpectedly meteoric successes, and very little of the film rehashes well known articles, sketches, or moments from other movies that have become iconic. In a big departure from Wain’s past films, anecdotes are kept to a bare minimum. It’s not a film about what made a comedic empire so great and influential, but instead about the rise and fall of one of the brand’s most notable players. The bulk of the film’s humour comes from watching recognizable actors portraying comic heavyweights in essentially superfluous roles; most notably Thomas Lennon’s take on writer Michael O’Donoghue and Joel McHale’s spot on recreation of Chevy Chase’s mannerisms and cadence, both despite neither actor looking remotely like their real life counterparts.

Although Wain and his writers attempt to play cute with the audience by way of having an older Kenney (played by Martin Mull) narrate the film, anyone familiar with Doug Kenney’s life will immediately know that the hard partying vibe of the film’s first half will have to come to an end. While the first act of A Futile and Stupid Gesture plays fast and loose within Wain’s established comedic warehouse, it’s the rest of the film that would prove to be the biggest challenge for all parties involved. 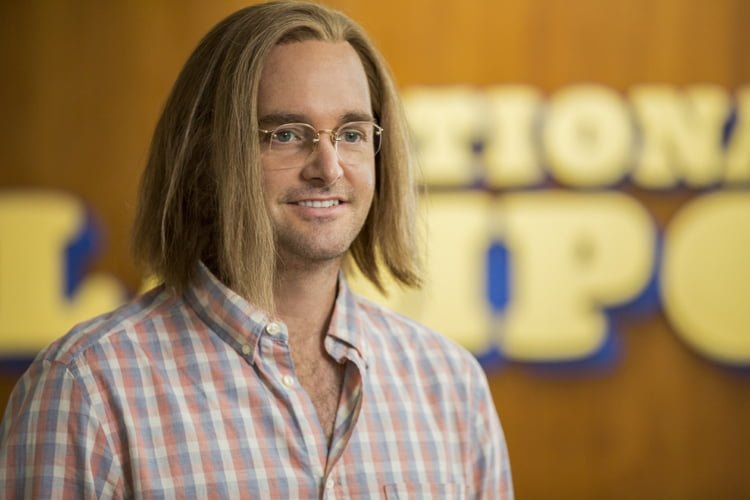 At a certain point, the big laughs will gradually drift away and decline in favour of a serio-comic look at how Kenney’s workaholic tendencies, jealousy, and unrestrained vices left his life in ruins. Forte, in his best performance, always depicts Kenney on an even keel throughout. Kenney is always a charming, funny, needy, petty, self-aware egotist whose disposition never changes, regardless of the gravity of any given situation. In public, Kenney demands to be the centre of attention; the kind of person who rarely admits what’s bothering them unless they can turn it into a joke. In private, he’s an insecure mess who uses his talent as a crutch, with a list of burned bridges and broken relationships longer than his accolades. The tenor and tempo of Forte’s depiction of Kenney rarely wavers until it has to late in the third act. Forte’s decision to make Kenney’s omnipresent punchlines and puns into sad, desperate cries for help the longer the film progresses is particularly astute.

Similarly, Forte displays great chemistry with Gleeson, an on screen pairing that I never knew I wanted before watching A Futile and Stupid Gesture. The constantly strained relationship between Kenney and Beard provides the heart and soul of the film. Kenney’s professional arc from becoming a lazy comedy writer to one of Hollywood’s hottest commodities provides the film’s backbone, but something feels missing during a lengthy portion of the film where Kenney branches away from publishing and the brand’s successful albums and radio shows and into the movie business. The part of the film that deals with Kenney’s work on Animal House and Caddyshack proves to be the least intriguing portion of Wain’s film, despite such material being necessary when talking about Kenney’s life. A big reason for this is because Gleeson’s vastly more relatable second-in-command wasn’t around for any of that. But whenever Forte and Gleeson are on screen at the same time, they immediately convey as performers what would have brought these two creative types together in the first place.

A Futile and Stupid Gesture isn’t without its fair share of other structural and technical problems. That previously mentioned narration device feels like a cheat the second anyone unfamiliar with Kenney googles his name. Although the film admits that space on the writing team was scarce for women in the 1970s, the parts set aside for Kenney’s long suffering significant others (played by Camille Guaty and Emmy Rossum) are superfluous and uninteresting. While Wain uses his exceptional ability to pull off a sight gag to great effect every now and then, the less comedic aspects of the film lack any real visual punch, and at times he’s speeding the narrative up, often at the sake of logic and nuance in a bid to get to the dramatic and comedic high spots, building to a final scene that doesn’t land very well on either side of the film’s tonal counterweights.

But for the most part, Wain has succeeded at trying something new, bringing his two lead performers along for the ride. A balance between big laughs and melancholy is hard for the best of filmmakers to achieve with any degree of conviction, but A Futile and Stupid Gesture does better than most looks inside the comedic mind. Wain and Forte understand that some of the greatest comedy comes from the greatest of pain, and the film wisely never forsakes one for the other.

A Futile and Stupid Gesture premieres on Netflix on Friday, January 26.

Check out the trailer for A Futile and Stupid Gesture: